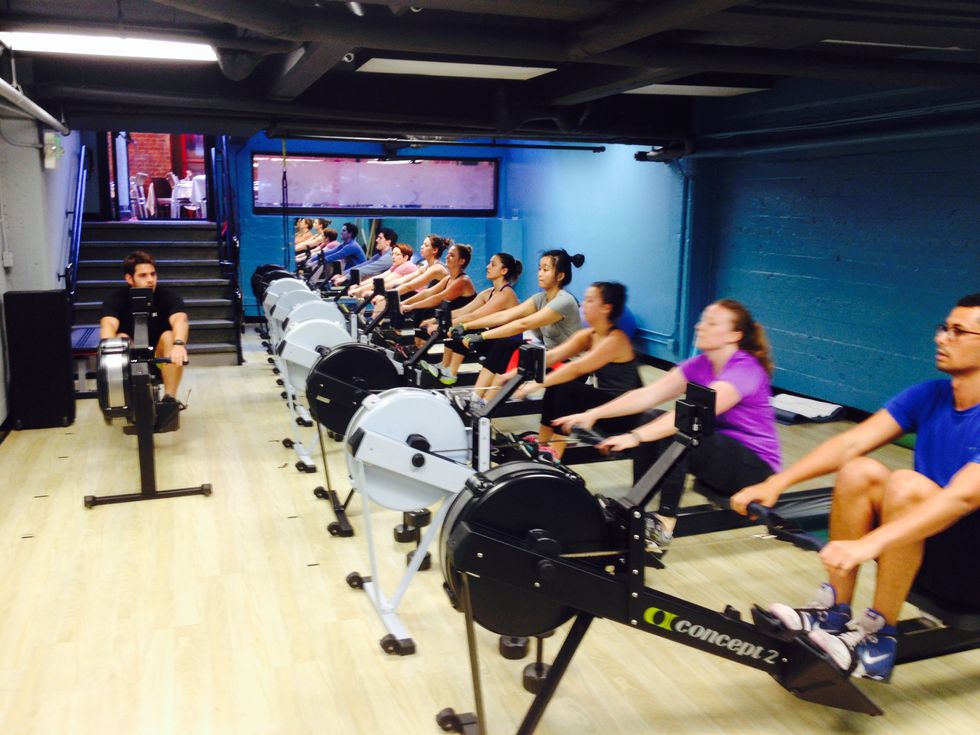 Find a cox and jump on your erg! RowClub’s high-intensity interval training classes will leave you convinced you missed out on rowing stardom in the Ivy League.

So, what's the appeal of rowing? For starters, a “bulletproof body," according to Johan Quie, cofounder of the first all-rowing studio in San Francisco, tucked away on Belden Place downtown. Turns out, rowing is also among the quickest ways to burn calories—the stroke engages your quads, back and core, all while increasing your aerobic capacity. "If you only have 30 minutes to work out, rowing is for you,” says Quie. "The great thing about our sport is that it's non-impact. Anyone from the weekend warrior to the 65-year-old can row and get the same benefits."

In the past six months, RowClub has tripled its size and expanded class offerings. We recommend starting out with the namesake 45-minute RowClub class. Our instructor, Robbie, began by slowing leading us through the four sequential positions of a single stroke on the ergometer, more commonly known as an “erg.” In no time, Robbie became drill sergeant, commanding “one, two, three, four” in repetition until we had our technique down and the movement felt natural.

During our class, we did six, four-minute intervals on the erg, sometimes focusing on stroke rate (speed) and sometimes focusing on the split (or force). Just when think you've mastered one, a monitor shows that the other has fallen off. But time breezed by thanks to Robbie’s encouraging words and, as my fiancé loves to say, you can do anything for four minutes. (But then, that doesn't take into the account the two-minute ab workout between rowing intervals.) Robbie quickly picked up on the fact that my fiancé and I are competitive, touching into that spirit that drives us both to work harder. We left our workout sweaty and energized, and in agreement that our instructor had played a big role in our intimate class.

“The thing that sets us apart is our instructors," says Quie, bragging on his team of serious pros, two of whom are currently competing for spots on the 2016 Olympic team in not only rowing, but also in track and field. "Our instructors offer a unique competitive edge since we have competed at the highest level,” he says.

While an Olympic bid may not be in our very near future, we did leave class feeling as though we had added an amazing form of exercise to our arsenal that we might love for decades to come. Give it a row, er, go. Your first class is free.