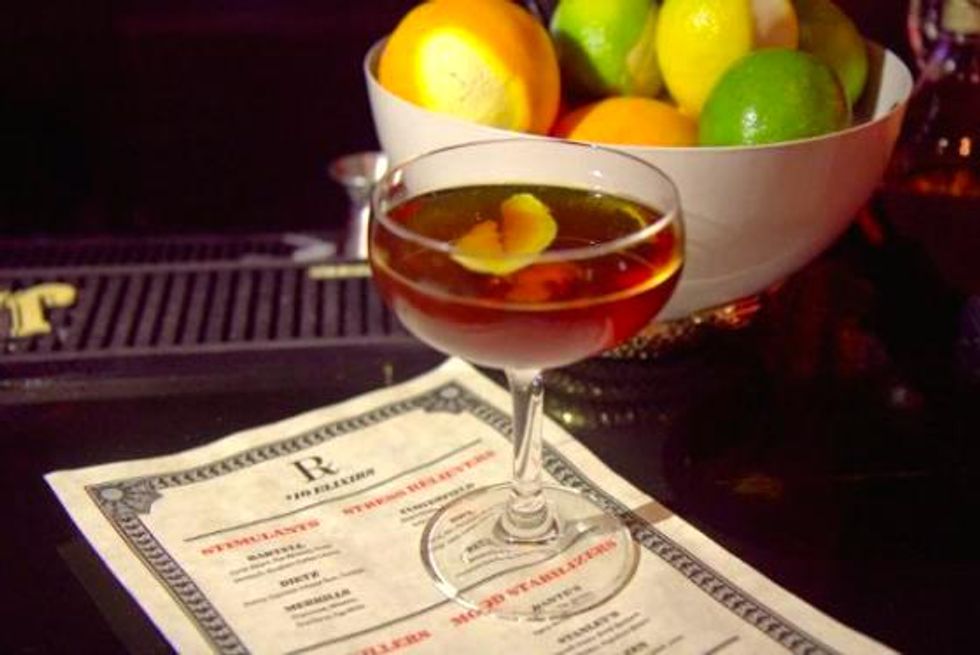 You're purusing the list of specialty drinks at a cocktail bar when one in particular stands out. You recognize most of the ingredients, but one is a mystery. What the heck is Becherovka? How does Cynar taste? Once little-used, these liqueurs are now starring on local bar menus. Here are five to try.

Like a lot of great booze, Becherovka was originally concocted as medicine: We can thank apothecary Josef Becher for creating the gingery-cinnamon digestif, originally called Becherbitter, around 1800 in the Kingdom of Bohemia (now the Czech Republic). The liqueur gained popularity when Becher's son, Jan Becher, began to mass-produce the stuff. And he was so gosh-darn proud of himself that his signature graces every bottle.

First made in 1885, this French aperitif was made famous by none other than Pablo Picasso, who depicted it in his 1912 Synthetic Cubist work La bouteille de Suze, which now hangs in the Kemper Art Museum in St. Louis. But surprisingly, the gentian, bittersweet liqueur has only been distributed in the U.S for about three years. In that time, it's been popping up on cocktail menus around SF.

Dig Cognac? Then you’ll love this French brandy produced in the Armagnac region of Gascony in southwestern France. Think of Armagnac as Cognac's older, boozier, and lesser-known cousin distilled from wine and aged in oak barrels (imparting a woodiness that Cognac lacks). In the 14th century, a doctor and ordained Catholic Cardinal praised its therapeutic qualities. That's good enough for us.

While this liqueur is often associated with the artichoke depicted on its label, Cynar is a concoction of 13 herbs and plants, only one of which is artichoke, that come together for an earthy-tasting amaro. Unlike many other amari, Cynar is not centuries old. First produced in 1952, it gained popularity in the 1960s thanks to a string of TV commercials and was acquired by the Campari Group in the 1990s.

A bottle of Ancho Reyes, an ancho chile liqueur made in Puebla, Mexico. (Photo courtesy of emmajanzen.com)

A relative newcomer to cocktails, Ancho Reyes was created in 1927 in Puebla, Mexico as a menjurje, or a homemade hooch concocted from a blend of native ingredients. Since the poblano pepper is Puebla’s most beloved crop, the local Reyes family saw fit to make a spicy spirit. After the poblanos are picked, they are left to dry in the sun until blistered—this is when they become ancho chile. The chiles are then hand-selected for quality, and the final result is a liqueur with a warm, natural heat.