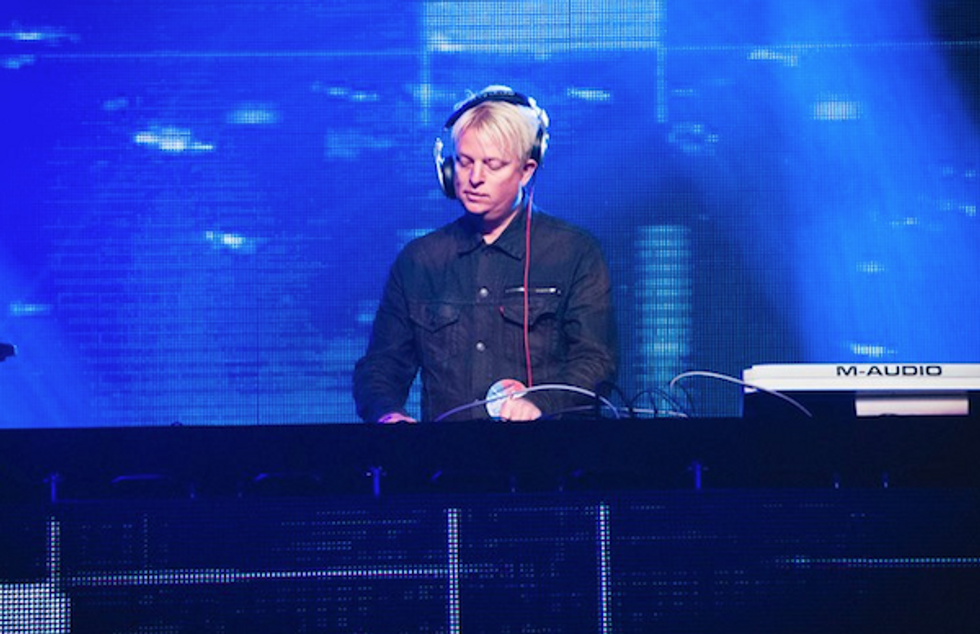 Aaron Axelsen has a knack for knowing what’s next. The trend-savvy DJ is the brain trust behind Popscene, a production and booking company that brings hundreds of world-class acts that are about to hit it big to intimate San Francisco venues on a weekly basis. In the last couple months alone Axelsen booked Geographer, Banks, and the Fratellis (among even more acts), and way back in 2012, he took a chance on an Irish teen named Ella Yelich-O’Connor, although these days you might know her by a different name—Lorde.

Outside of Popscene’s founding 18 years ago as a weekly club night now held at Rickshaw Stop, Axelsen has established himself as a mainstay of San Francisco’s music scene. He has hosted SOUNDCHECK at Live105, the Bay Area’s most popular alternative radio station for some time, and works as the station's Music Director.

We sat down with Axelsen as Popscene continues to grow to talk about the state of live music in San Francisco, show time rituals, and the nonstop life of a DJ.

What’s your favorite place to grab a pre or post-show bite?
I love grabbing a veggie burrito at Las Estrellas on Gough Street in Hayes Valley before a Popscene club night or, of course, a tasty dinner at Herbivore on Divisadero before hitting up a show at the Independent.

What is your favorite venue to catch a show on your night off?
Bottom Of The Hill, Brick And Mortar, The Independent, Public Works, Mezzanine, The Fillmore…We have so many fantastic venues here in SF to catch shows. We’re all pretty damn lucky.

What have been some of your favorite bands you've booked for Popscene so far?
In the 18-year history of Popscene as a San Francisco weekly indie club night, I’m pretty proud that we’ve debuted so many wonderful acts on our stage, including Muse, Amy Winehouse, Phoenix, Mumford and Sons, Vampire Weekend, Calvin Harris, Arctic Monkeys, Ellie Goulding, Miike Snow, Two Door Cinema Club, Flight Facilities, Bombay Bicycle Club, Bastille, The 1975, The Killers, etc. And in 2014, some of my favorite bookings so far include John Newman, Broods, Sam Smith, Betty Who, Rufus, Wildcat! Wildcat!, Bear Hands, Fenech-Soler and Glasvegas.

Do you have any favorite local music acts right now?
The SF music scene is so rich in talent right now. Some of my favorite top local bands (that I support on Sunday night via my Live 105 radio show SOUNDCHECK), include Cathedrals, Waters, Ghost Town Jenny, Trails & Ways,The Fresh & Onlys, Metal Mother, Soft White Sixties, Midi Matilda and, probably my favorite right now, the French Cassettes.

Any funny stories at a show/booking/with a band?
When we first moved Popscene from 330 Ritch Street to Rickshaw Stop I booked a new baby band from LA called Foster The People. Their Tour Manager thought Popscene was still at the old venue and proceeded to somehow gain entry into the empty club and set up ALL the bands gear on stage before realizing he was at the wrong space.

What has been your favorite recent music discovery/discoveries of 2013?
Lorde. Crazily, we were the first radio station in the country to play her music when we debuted "Royals" on our Saturday night EDM show Subsonic back in late 2012, and we’re all pretty proud here at Live105 with how massive she has become.

Do you have a favorite local music festival?
Besides BFD and Not So Silent Night, my absolute favorite local music festival is Treasure Island. It’s intimate, accessible, unique, harbors amazing talent each year and of course offers up spectacular panoramic views of the city. Kudos to Allen Scott at Another Planet and Jordan Kurland from Noise Pop!

What’s the best place to catch live music outside of the Bay Area?
I love the city of Austin, Texas and have been fortunate to attend the annual SXSW music festival for over 15 consecutive years now. It’s basically my summer vacation.

San Francisco’s music scene is very rich and Popscene plays a big role in bringing many bands here that are about to hit it big. What else does Popscene contribute to the music scene as a whole here in the Bay Area?
That’s a tough question! All I know is that Popscene was founded by four hardcore music heads that all met at Mod Lang Records in Berkeley many years ago (me, Eric Shea, Omar Perez and Jeremy Goldstein) and launched as a simple outlet and platform to share music that we love and introduce new bands that we’re crazy about with the rest of the SF scene. One of the first bands we EVER booked was The Dandy Warhols back in the early Popscene Cat Club days, circa like 1996!

Where is Popscene headed in 2014?
Embracing great new music and introducing exciting new artists on our stage has always been the catalyst and foundation of Popscene, coupled with our weekly DJ sets and the amazing and passionate clientele who support our weekly party. So basically, I simply see 2014 as continuing with this long-running SF tradition.