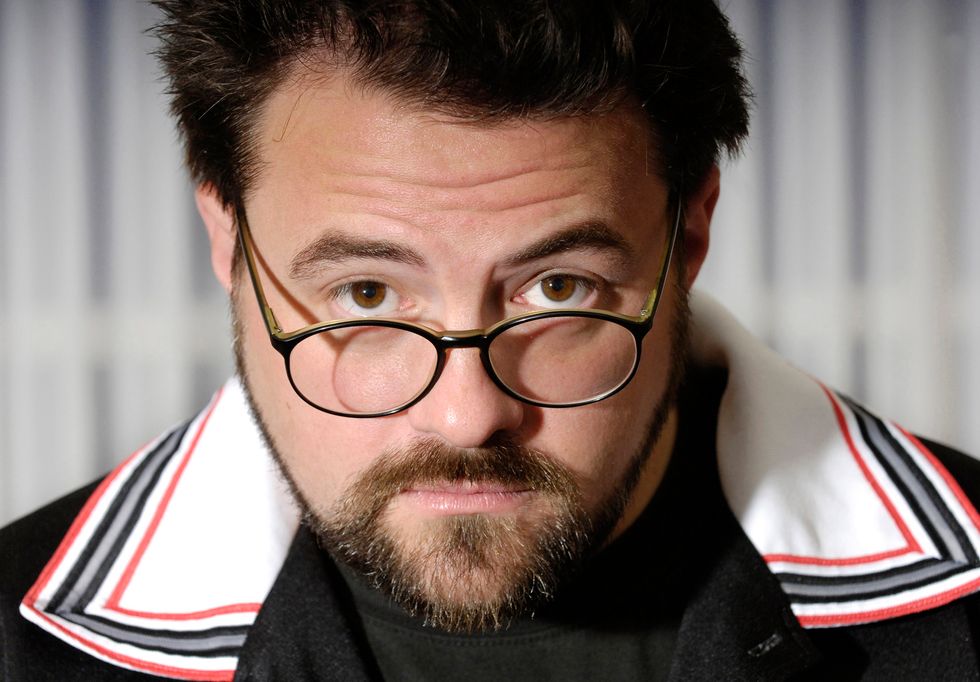 That's a Wrap! At 40, Kevin Smith to Retire from a Colorful Career in Filmmaking

To say that critics made Kevin Smith’s career might seem to ascribe too much significance to the whims of a vocal but oft-ignored minority. But to hear Smith tell it, it was New York Times writers Janet Maslin and Dave Kehr whose unreserved praise of his modestly budgeted Clerks (1994) helped put the former convenience-store cashier on Hollywood’s map.

Clearly, the New Jersey native hasn’t forgotten his humble beginnings – he’s the first to acknowledge the role critics played in anointing him one of America’s most promising young indie directors back in the mid-’90s. Yet that hasn’t stopped him from lashing out at them in recent years, rightly targeting Good Morning America’s Joel Siegel, who verbally disrupted an advance screening of Clerks II (2006) on his way to an early exit, and later including an entire universe of critics, following their chilly response to last year’s Cop Out.

Well, you know the saying – if you can’t beat them, join them. No, Smith, whose independently financed thriller Red State will arrive via Video on Demand in early September, won’t be posting critiques on Rotten Tomatoes anytime soon. But rather than prolong a directorial career that no longer seems to pique his interest, Smith, 40, plans to retire from filmmaking after the release of next year’s Hit Somebody, a hockey drama loosely inspired by a Warren Zevon song.

What then? Naturally, he intends to join the media full-time – not as a writer, but as an online radio personality, regularly doing podcasts with longtime collaborators Scott Mosier and Jason Mewes. That’s hardly to suggest that Smith will limit himself to the airwaves – he still enjoys addressing his fans in the flesh, and hopes to present screenings of his films from time to time, wherever there is an audience and a theater willing to accommodate him.

He still expresses himself in comic books, too, though Smith emphasizes that he’s a storyteller, not an illustrator. He has zero interest in portraying his favorite superheroes on screen, where their mythology is often diluted to broaden their commercial appeal.

Instead, Smith says he’s ready to abandon movies altogether, not because he’s lost confidence in his ability to make them, but because he would rather draw paychecks – however small – just for being himself, chatting with friends, followers and yes, even critics, in an uncensored forum where he calls the shots.

On never truly mastering the technical aspects of filmmaking:
“I want to finish as I started – completely ignorant. I know what the lenses look like now, but I’ll be happy to make it to the end without knowing all the technical stuff. That just proves anybody can do that job.

"That’s part of what I’ve liked about my career – not just making the movies and the money, and I got a really nice fucking wife out of the whole deal, but the other thing was being able to stand there like the fucking chef in Ratatouille. You know, ‘Anybody can do it!’ I know I’m not to the manner born, and I’m a total visual idiot, but if I can make a career out of it, anybody can.”

On playing to his strengths, on the screen and off:
“I can stand here and slag on myself, but I have improved at the technical aspect of making movies. But I never wanted to embrace it fully because that’s not who I am, and that’s probably why it’s so easy for me to put it down. Clint Eastwood could probably go out of this world toes up off a movie set – same with Steven Spielberg or Martin Scorsese. They could never put it down cause they’re visual storytellers, it’s in their blood. For me, it’s afforded me the opportunity to try a lot of fucking things.

“I’m not good at all of them, but I try to put my energy toward what I’m best at. Not everything I’m best at pays. I’m hella fucking good at jerking off, but nobody pays you for that. So you have to be patient. We didn’t start [his online radio network] SModcast to turn it into a business, we just wanted to sit around talking once a week. Then it slowly, organically grew into what it has become, we branched off into other shows, and eventually we had enough hours of content to open our own network.

“People are gonna ask, ‘Is it true? Did Kevin Smith really quit film and go to the Internet to start broadcasting like that dude in the Pump Up the Volume movie?’ They’ll come and test it out and think I must be nuts, but if we can get somebody’s ear for 10 minutes, we can hook ’em. The shit we talk about, whether it’s geek-oriented or sexually oriented, tends to be pretty humorous, and it tends to be universal. And frankly, I’m way more into that than I am into film.”

On writing his own epilogue:
“Very few of us get to choose how we go out. For me, it’s winding down and I’m wrapping it up. Youth is prized in this industry, and I was young once, and people seemed to think I knew something about youth culture. I’m no longer young, I’m a middle-aged fucking man at this point. The good stuff comes from young people, and you want to make way for them. So what I wanna do is go out without someone saying, ‘We’ll call you, don’t call us.’ Even for people who’ve made legendary films, the work just kinda dries up.

“I would hate for that to happen. You know, ‘Nobody cares about your shit, Silent Bob.’ I don’t want to be the last guy at the party, saying, ‘Hey everybody, let’s watch a movie!’ I want to get out two hours before the party ends. But in my case, somebody who came along and did the movies I wanted to make, just a lot more profitably, was Judd [Apatow]. Once Judd came along, I thought, ‘This smells hauntingly familiar.’ And he makes tons of fucking loot doing it.

“The only reason why Clerks and Mallrats exist is because they didn’t exist back when I wanted to watch movies. I just wanted to put shit up on screen that I didn’t see. I loved movies, but I didn’t identify with what I was watching. I love Die Hard, of course, but I don’t identify with John McClane, especially now. I would never shoot a terrorist, I would never jump off a building, I’d never even take my fucking shirt off in public.  "

On the movie that inspired him to direct in the first place:
“For me, the call to arms was Quentin Tarantino making Reservoir Dogs, where for that first melodic five minutes in the diner these guys are talking about pop culture. I was like, ‘This counts’ – and if that counts as movie dialogue, well shit, I could write movie dialogue, cause that’s all I ever do with my friends. So Reservoir Dogs took the gloves off for me.

“And look – if there’d have been a fat guy making fucking movies about comic books and wanting pussy but never getting any, there would be no Clerks. I’d never have made a movie because I’d be happy to love that guy’s films. He would speak to me. But he wasn’t there, so I had to speak to myself.”