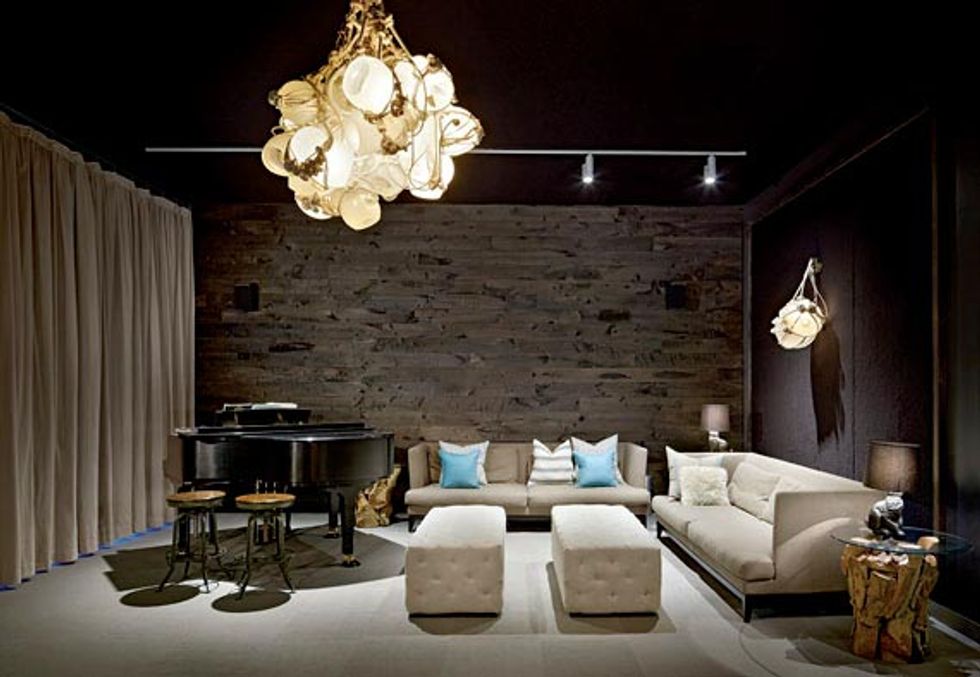 We present to you our favorite local gems in the design department.

ROOM CANDY:The Future Perfect
David Alhadeff, owner of the Brooklyn-based shop The Future Perfect, chose SF for his first West Coast outpost because of our like-minded design scene and appreciation of his spare, nature-attuned aesthetic. Since opening on Sacramento Street in April, The Future Perfect has gained the approval of locals who love the store’s raw, zen-like pieces, including Michele Quan’s ceramic quartz crystals and fair-trade bamboo wood baskets by Dutch designer Piet Hein Eek. The beauty here is in simplicity.

WAY TO CUT A RUG:Peace Industry
The SF-based rug company known for its modern cheerful patterns and use of traditional felting technique upgraded in April to a new 2,000-square-foot showroom. With room to stretch its legs, Peace Industry Rugs’ new space offers more in-stock floor coverings, as well as a larger selection of furniture. Look for pieces by Alice Tacheny Design, Andrew Dewitt’s pottery, and Patty Benson’s felt accessories.

RENOVATION:In Fiore
Twelve-year-old perfumery In Fiore infuses a pinch of soul in all its oils and elixirs. When it came time to renovate the brand’s Post Street home, the same recipe applied. Owner Julie Elliott called upon artisan-designer Matt Dick (of Small Trade Company), who erected gorgeous, reclaimed-wood display cabinets in the spirit of French architect and designer Charlotte Perriand. The end result: a vitrine that brings together the feeling of a European apothecary and the geisha houses of Kanazawa in Japan.

HAUTE HAPPY HOUR:Umami Mart
For your next housewarming gift, head east to Umami Mart, a minimalist boutique, designed by Danish artist Anders Arhøj, devoted to the insanely beautiful Japanese-made kitchen and barware beloved by restaurants including Lolinda and Blackbird. Splurge on the gold-plated shaker ($75), and a repeat invitation will be guaranteed.

MAD MEN STYLE:Midcentury Mobler
If it’s good enough for the set designers at AMC’s throwback hit Mad Men, imagine what madness is in store for us laymen at Midcentury Mobler. Owner Julian Goldklang, whose collection was tapped for season six of the period drama, travels as far as Copenhagen to stock his 5,000-square-foot warehouse on Shotwell Street—the biggest in Northern California—with treasures like Adrian Pearsall gondola sofas, Hans Wegner Papa Bear chairs, and Louis Poulsen lights.

FOOD ARTS: ReCheng Tsang  at Frances
Chef Melissa Perello’s Michelin-rated Frances is a feast for the eyes as well as the palate. This spring, the restaurant put up a three-panel porcelain installation by Berkeley ceramic artist ReCheng Tsang. Made of hundreds of torn and frayed strips of porcelain clay that were fired in a kiln, the work mimics the interplay of raw materials and technique also found in Perello’s food. View them on display through the end of 2013.

WALL SPACE:White Walls
Gallery owner Justin Giarla put SF on the map for street-art collectors. In the past decade, he’s curated legends such as Shepard Fairey and delivered locals Casey Gray, Ferris Plock, and DYoungV to art-world fame. His latest move is the consolidation of White Walls and sister space Shooting Gallery into a new 5,000-square-foot home, formerly a bakery. Imagined by the eco-savvy designers at Klopf Architecture, the sky-lit space with exposed wooden beams, concrete floors, and an all-glass facade is spare and well-lit to let the works speak for themselves. Look for collage artist Greg Gossel and graffiti artist Niels “Shoe” Meulman in July.

FOREST RETREAT:Hotel Paradox
The SF design firm of Orlando Diaz-Azcuy applied its hallmark modern lines and luxurious finishes to Hotel Paradox, a 170-room surf-and-turf boutique hotel surrounded by a redwood forest just a mile from the boardwalk. Designed by principal David Oldroyd, the lodging has a few whimsical surprises: In the restaurant, dine beneath a trompe l’oeil ceiling on a perpetual summer day. Squirrel figurines frolicking on the ceilings induce smiles.

TEAM WORK:Fire Station 1
SFMOMA did one of its neighbors a solid: In a unique partnership with the City of San Francisco, the mayor agreed to  relocate the city’s busiest fire station from 676 Howard Street (next to SFMOMA) to 935 Folsom Street. The first new fire station to be constructed in SF in more than 40 years, the project rings in at a whopping $12 million. The 15,136-square-foot building designed by LMS Architects is equipped with a three-truck garage, exterior steel screens to deflect the sun, and a gym for the firefighters. It also represents a rare partnership for the public and private sectors.