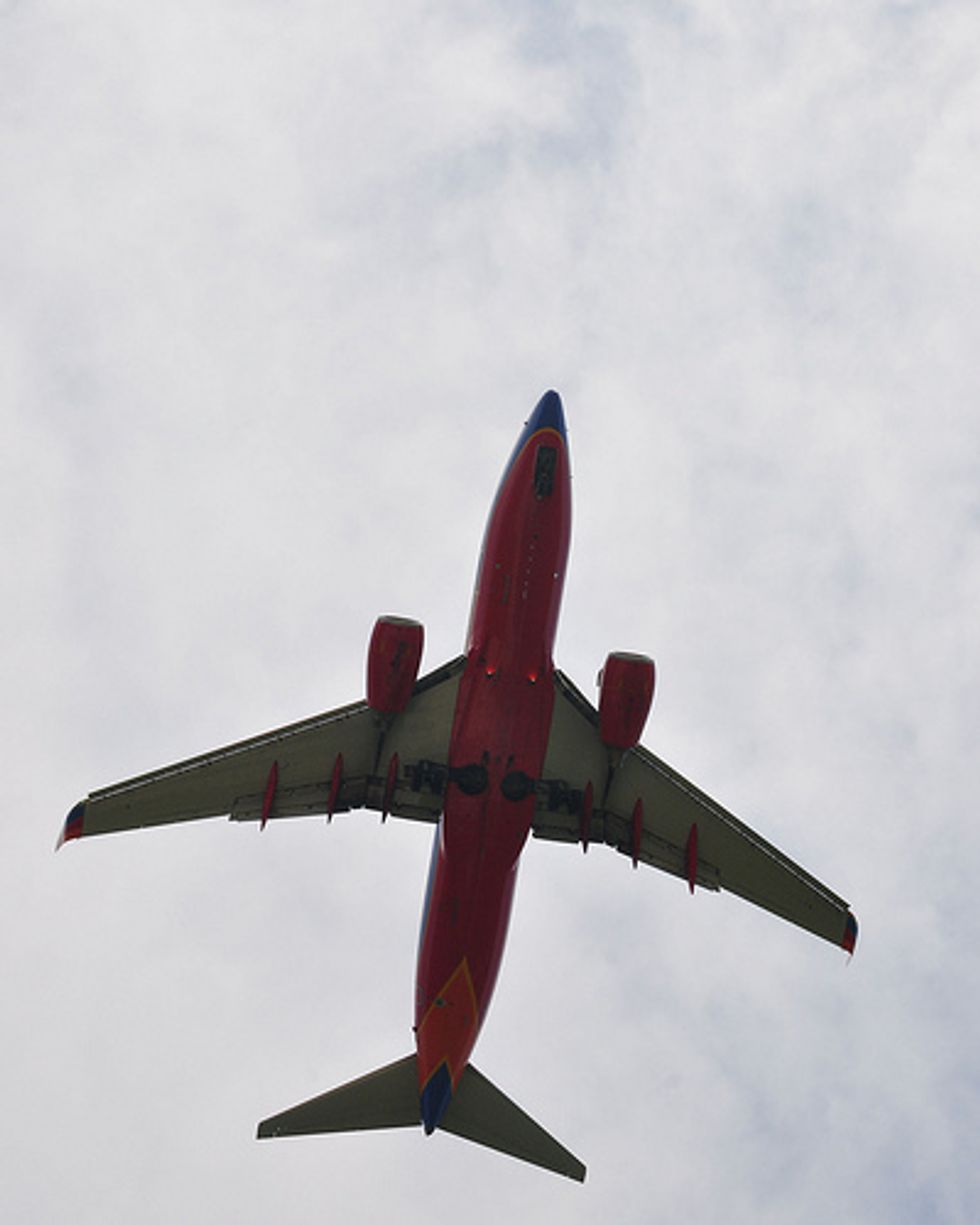 The Case for Talking to Strangers While Traveling the Friendly Skies

Halfway through a cross-country flight to New York, somewhere around Iowa, I’m trapped in the middle seat and 400 images deep into a stranger’s Flickr set of 600, taken on his last trip to Southeast Asia. I furiously elbow my sleeping wife (correction: my pretending-to-sleep wife) to come to my rescue. “You made your bed,” she says after we land. And she’s right.

Air travel divides us into two types of passengers. There are those who treat the sky like a private office, donning headphones, opening laptops, and refusing to greet whoever’s seated less than an inch away on either side. Then there are passengers who treat the cabin like a personal coffee klatch, sharing snacks, swapping stories, showing pictures—their enthusiasm hardly dampened by an irascible aisle mate.

But consider this: In June 2010, I boarded a JetBlue flight bound for New York, the one that leaves in the morning and deposits you at JFK in plenty of time to meet friends for dinner. My bag was oversized and too heavy for the overhead, but I shoehorned it in there anyway, collapsing in a sweat beside a man in 11A.

What began as small talk slowly developed into a deeper conversation. A native San Franciscan, he was bound for the Webby Awards, the first hint of a shared interest.

We then talked for five hours, learning that we had the same CSA pick-up location and taste in books, as well as a common love of Band of Horses (in San Francisco, this is akin to discovering a long-lost relative). When the plane touched the tarmac in New York, we exchanged business cards and promised to stay in touch. And then we did. We met for oysters at Hog Island Oyster Bar, he met my wife and I his girlfriend, and in time, the four of us quickly became like family. This coming June, we’re attending their wedding.

Sure, we might have met someplace else. But we didn’t—we met because we were willing to acknowledge the person sharing our armrest. That meeting alone makes up for the unbearable flights I’ve suffered through. The ones where I’ve watched a row of wizened business travelers roll their eyes as a beleaguered new parent boards, infant in tow. And the ones where my seatmate (or his meal) possessed a powerful aroma.

Once while waiting for a red-eye to Boston to take off, about a half hour of conversation with my neighbor revealed that he had roomed with a good friend of mine back when they were undergrads at Boston College. Talking to him was like playing a game of 20 Questions, quickly narrowing in on our shared experience: Are you from Boston? Where did you go to school? What year did you graduate? You don’t by any chance know so-and-so?

Coincidences like these are my bread and butter. But to experience this ordering of a seemingly random universe, I have to talk to people. I imagine that during the golden age of air travel, passengers smoked and drank and spoke to one another because there were fewer distractions. But these days, our flights are increasingly equipped—first televisions, now Wi-Fi, and soon cellphones—to help us pass the time and ignore whoever’s sandwiched in next to us. (Not to sound like a Luddite—I’ve certainly sat through many a long flight watching back-to-back episodes of Millionaire Matchmaker.)

It all makes me wonder if we’re moving further away from certain social behaviors—like say, small talk—once fostered on planes in order to create something closer to an average day at 500 miles an hour. As a city largely made up of transplants who find themselves traveling by air every year to spend the holidays back home with our families, we’re instead more keen on faceless connections that usually take place online. Introduced through Twitter and consummated in Google Chat, the new relationships we forge have a depth (and often an intimacy) that we often can’t muster even on the streets of the Financial District in the real world—let alone 35,000 feet above it.

Looking at last year’s numbers, we can expect three million people to fly through SFO over the holidays, some bound for sunnier climes, some for places where white Christmases are real, true things, and some to tie up the loose ends of Q4 business. Wherever they’re going, one thing’s for sure: On planes where all interests and types are forced together, we’re presented with a choice of whether and how we’ll interact with one another. Afraid of wasting time on uncomfortable encounters, some air travelers prefer to fly free of eye contact, the potential for embarrassment or rejection or for getting stuck in an uneasy conversation virtually erased. Others like me take a risk and say hello to whoever’s seated next to them. Get lucky, and you meet a lifelong friend. Other times, that choice means your curiosity and politesse end at the point where I was, over Iowa on a cross-country flight, looking at photographs of a paunchy old man and his wife at every  monument in Kuala Lumpur while my spouse “slept.”

In both cases, I have no regrets. Like flying itself, turning to acknowledge the person sitting next to you on a long trip is a game of chance. But chance often affords new opportunity—or at the very least, a good story to tell your friends and family when you land.