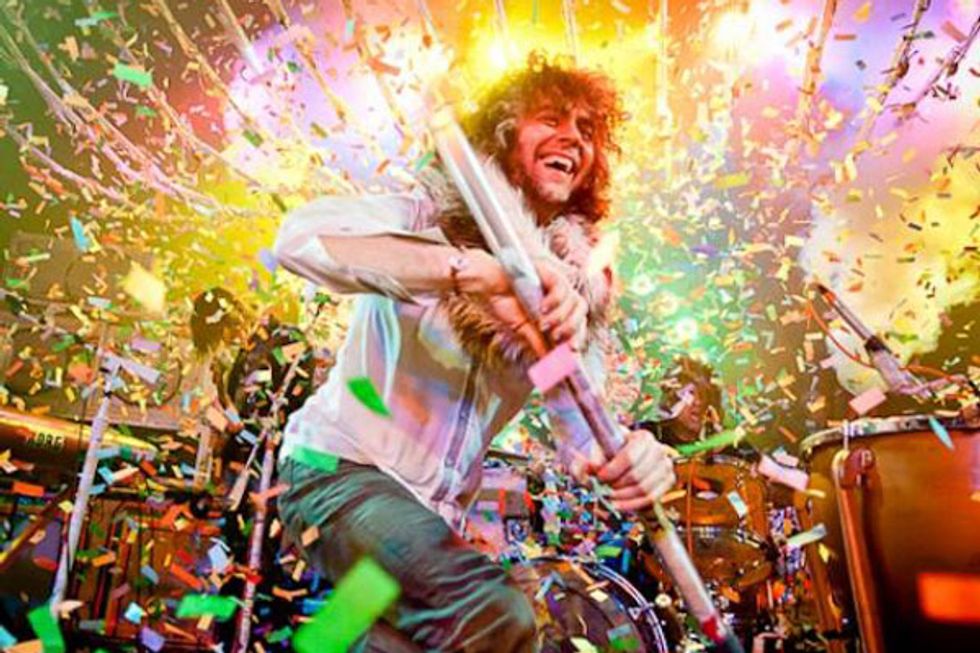 The Legendary Brio of Bimbo's 365 Club

As the legend goes, guests visiting Bimbo’s 365 were subjected to a scandalous visage. They called her Dolfina, the woman in the fishbowl, and her appearance was part optical illusion made possible by strategically placed mirrors, and part burlesque dancer, in place to entice patrons towards the bar. She appeared as a mermaid relaxing underwater, and many of the frequent visitors and workers claimed to have dated her, “the fishbowl woman,” but like Dolfina’s illusion, who really knows the truth behind the fantasy?

"The Woman in the Fishbowl", Courtesy of Bimbo's 365 Club

These days, no real woman lounges in the fishbowl, but its iconic image is a simulacrum of the club’s glamorous history. The image appears throughout the club in different places, from the bars to secret rooms tucked away as an everlasting leitmotif, re-emerging here and there like a recurring theme throughout Bimbo’s three-generation dynasty.

Nearing 100 years old, Bimbo’s is a pillar of San Francisco, and like Bimbo himself, who in the 50s created what manager Allyson Moulton aptly describes as “the original Critical Mass,” the family has always been a big part of North Beach’s rich history. In fact, Bimbo was so well-liked in San Francisco, that when Mayor Moscone (who was a good friend), caught wind of his epic 75th birthday celebration he ordered in a very special birthday card—from the President.

Today, Michael Cerchiai, Bimbo’s grandson, owns and operates the club. It’s something of a second home. He can even recall his eighth birthday at the venue, when he and his friends ate a Batman-themed cake while Smokey Robinson played onstage.

The club has been in operation for nearly 85 years under the ownership of Bimbo’s family (first at 365 Market St., which is where the “365” derives from), and they’ve indeed seen their share of entertainment history in action. For example, there was that George Clinton show in 1992, when Cerchiai had just taken the reigns to the club, and Stevie Wonder and his entourage rolled in. “He couldn’t have been any nicer,” he recalled. “But before I could bring him a glass of champagne, he was on stage singing with Clinton.”

History gets made at Bimbo’s. Even before the Condor rolled in their topless dancers, Bimbo’s had topless performers, appearing festooned with extravagant plumage and embroidery onstage. Many years later, Fiona Apple played her first San Francisco show here as did Adele. Charlize Theron once kissed a woman in the audience for a 20k charity donation event, and Robin Williams riffed new material in a semi-secret, unbilled show just after 9-11, when, as Cerchiai puts it, “people really needed to laugh.”

But he’ll never forget when Al Pacino walked in. It was a party celebrating the 25th anniversary of The Godfather film, which, as the rumor goes, Francis Ford Coppola wrote just down the street at Caffé Trieste and Vesuvio. The whole thing is practically a North Beach production. But that’s an important sentiment in Bimbo’s history as well—community.

Recent decades are rich with history too. Once, The Kooks almost burned down their dressing room at a show put on by Alice@97.3. It wasn’t their fault—a malfunctioning laptop in their room exploded—but nevertheless, everyone, including the night’s headliner Colbie Caillat, needed to be moved out of smoke’s way. Cerchiai escorted the small group down to “Bimbo’s Cantina”, an intimate, semi-secret room attached to the venue’s immaculate kitchen.

Not many have seen this room, but it’s full of very old wine bottles, a mirror with a design of the legendary woman in the fishbowl (pictured above), and antiques, including a statuette of a wind-up, whistling sad clown standing next to a lamppost. When Jack White played Bimbo’s (and he has several times, with both The Raconteurs and The White Stripes) his manager requested Cerchiai show White the clown, as he apparently has an affinity for antiques like these. He was right—White was smitten.

Probably the most memorable show in recent memory was that of The Flaming Lips in 2012 as part of Noise Pop’s 20th anniversary celebration. The band revived their legendary Boom Box Experiment, where essentially the band engineers a diabolical surround sound using multitudes of boom boxes to create, as MTV puts it, a sound that “vacillate[s] from sheets of metallic rain and electric hail falling on a tin roof to a dog barking in the distance as the song fade[s]  out six minutes later.” They ended the show with confetti—which the staff still finds today here and there.

Bimbo’s has seen it all. From its nascent stages, where Bimbo self-admittedly used to bootleg liquor during the prohibition, to the last supper club dinner in 1969 and beyond, they’ve remained a sturdy presence in the city. They’ve seen nightly events spanning from a Rita Hayworth chorus line to the Cox-Arquette Wedding to Zola Jesus later this month, and they’re not showing any signs of slowing down.

But most importantly, they hang on to their sincere hospitality, a fundamental component to their success. They love their guests, and they treat them well. “What I have in my heart—it’s on my tongue,” Bimbo told a news crew in a 1970s segment. “I love people.”