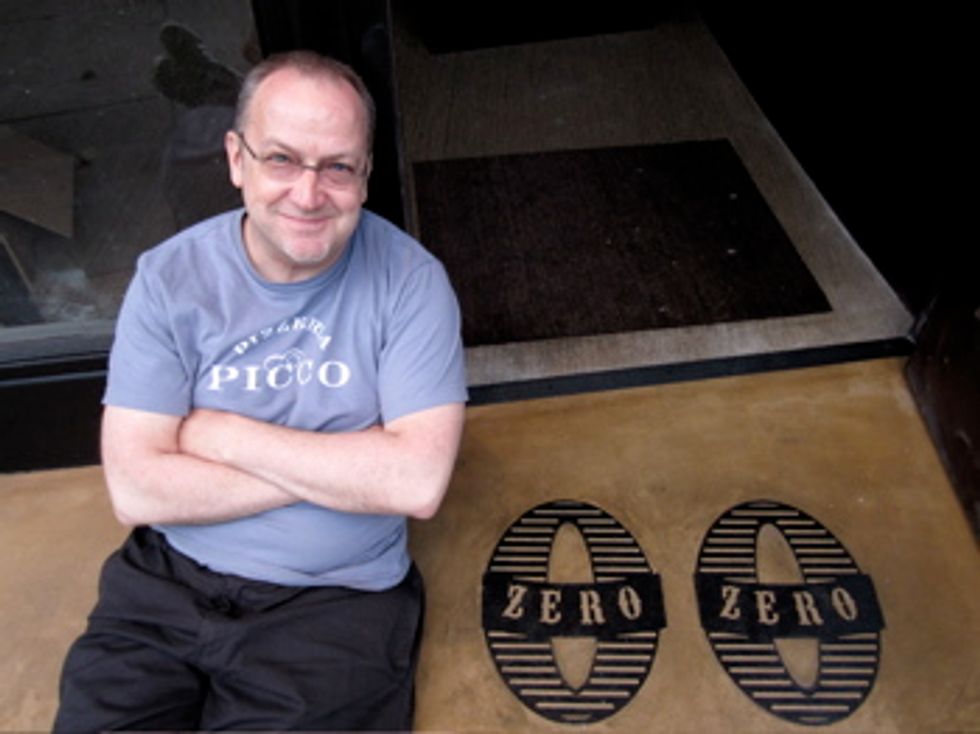 Bruce Hill, chef-owner of Bix in SF and Picco and its next door pizzeria in Marin, is set to open the doors to his newest venture tomorrow: Zero Zero. Located next to LuLu in the former Azie space, the two-floored building has received a very Michael Brennan redesign (imagine a dark, rather gothic mural on the second floor, complete with images of tomatoes on the vine and … Pinnochio), massive mirrors over one of the two bars and salvaged vintage lights from flea markets. The man who first brought us pizza and soft serve took a minute out of a foggy day to give us the skinny.

So what's on the menu?
Pizza, pastas, Italian small plates. Honestly, we have too much kitchen. We weren't intending to do so much.

What will separate your pizza from the pack?
We're not going to cut our pizzas. We'll let you cut them yourself. They'll stay crisper longer. A lot of Neopolitan pizza gets soupy in the middle.

Are we headed for a pizza backlash?
No, I think high-quality pizza will raise the bar for everyone. Besides, when was the last time you've seen a pizza place close?

I'd say you really started the soft-serve trend in the Bay Area with your pizza and soft-serve at Picco.
Yeah, we actually forced Straus to come up with the soft serve mix that everyone uses now, but we still make our own. Ours is 10 percent fat. Theirs is only six percent.

What's the story with your pastas?
We'll be making stuffed pastas by hand. But to my taste, I like dried pasta. For that we'll be using Granoro, which is the best.

The oven?
Mugnaini
. It's not a full freak-out kind of oven. But these guys are based out of Watsonville and restaurants like Chez Panisse and Oliveto use them.

The pizza?
The sauce is simply canned tomatoes from Italy and Sicilian sea salt. Our crust is made with zero zero flour. We get our mozzarella from local Fromaggi di Ferrante who makes the curd for us. We stretch it daily. We cook our sausage for our pizza in sous vide. All the flavor is in the fat, so doing it this way it's not lost.

The bar?
Delicious cocktails that don't take forever. Also, we're going to serve punch. You go and get a bowl of punch at the bar and off you go!

Are cocktails and pizza a good pairing?
I'm not positive it's the best thing. But I love pizza and Coca-Cola together, so maybe we'll do something like an amaro with a little spritz?

You've been dividing your time between Bix in SF and Picco in Larkspur. What's the difference?
The Marin crowd is families. We also get packs of women that call themselves "yummy mummies." Their husbands are out fishing or something and they all come in to dinner together. As for Zero Zero? We're going to be the place you end up after the Folsom Street Fair.