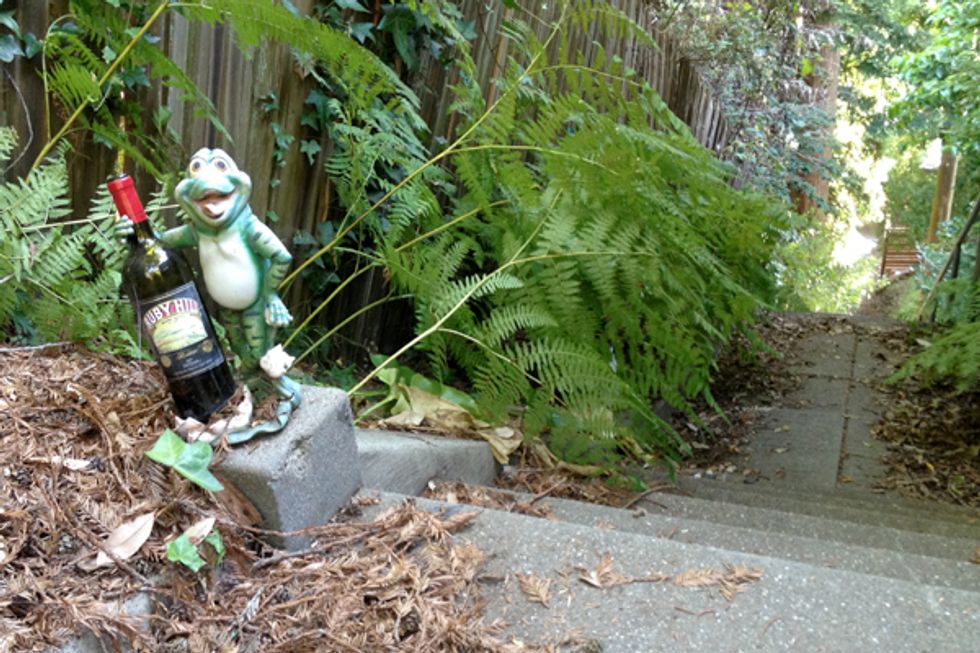 This month's Ultimate Sunday Hike is a short and steep journey of urban discovery. While only 2.2 miles long, you're sure to get your heart rate up ambling around this network of meandering paths in the Berkeley Hills while enjoying marvelous views and eclectic architecture.

This sojourn might have turned into a day in a maze if I had just tried to wing it –thanks to berkeleypaths.org for providing an excellent map (shown below) for me to get started. To access this hike by car take the Albany exit on I-80, go up Marin Ave, then right on Los Angeles, followed by a left on Spruce–park where you can on the 1000 block) or use AC Transit route 67, which goes up Spruce from downtown Berkeley.

Head up Spruce, crossing Santa Barbara Road (our return route) until you encounter our first set of steps, Easter Way. Kudos to the City of Berkeley, as all the paths in this neighborhood are well signed (and maintained). This path spans three blocks, and gives us a good start on our nearly 700 feet of elevation gain. The entrance to the third leg of Easter is 100 feet up Euclid and brings us to Cragmont Park. Take a moment to walk over to its viewing platform for a magnificent vista of the San Francisco Bay and Golden Gate.

Continuing on Regal Road our next path (on the left) is Pinnacle, which takes up to Poppy Lane and Remillard Park, noted for its rather large rock (great for budding rock climbers). At the end of Poppy Lane we'll continue up Poppy Path to Miller Avenue. At this point, you'll probably have a growing appreciation for the hidden gardens and the many interesting building styles you've encountered on the way. It only gets better.

Proceed to the right on Miller for about 1000 feet and hang a left for our last path up, Bret Harte Lane. At the crest, you'll find busy Grizzly Peak Boulevard (and an AC bus stop, the 65 Euclid). We'll head right and start our descent, turning onto Stevenson, where we'll pick up the Anne Brower Path. At the base (Miller Ave) briefly go left, then right down Whitaker Avenue passing Grizzly Peak Park and going right at the T intersection with Sterling, followed by an immediate left down on the Whitaker Path.

At Keeler Avenue go right, then left on the Upper Covert Path, cross Cragmont Avenue and continue on the lower section as it winds down through a gully to Keith Avenue. As you swing around to right on Keith, ignore the temptation to go down Redwood Terrace and go six houses more to the last path (of this hike) El Mirador, where you may encounter offerings left on the steps by previous visitors (or perhaps local gnomes). To get back to the start point go right on Euclid, then left on Cragmont and finally a left on Santa Barbara. As you may see from the maps, there are many other paths nearby that can extend this hike in a number of directions–for example you can continue up at Grizzly Peak Boulevard to Crescent Park and beyond to Tilden Park and Lake Anza.

An interactive version of the map below can be found on the Berkeleypaths.org website, a great resource for more walking adventures in the East Bay's hippest city.