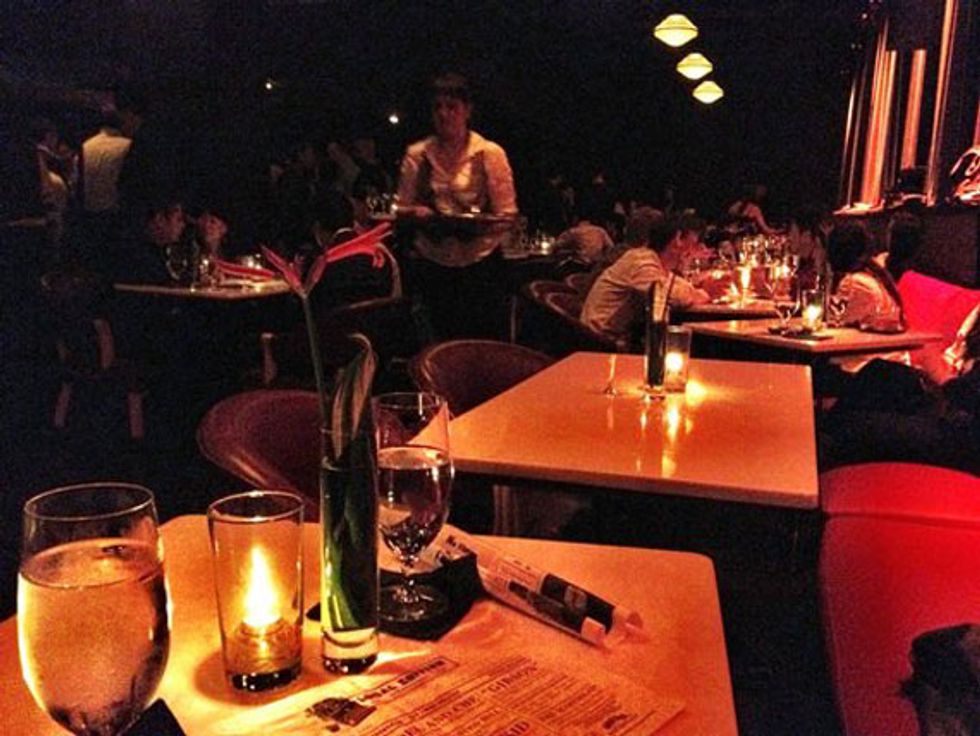 I’d been meaning to check out Local Edition ever since it opened, so when my friend Lauren Nicholl facebooked me yesterday about coming to her Travel Massive event, I jumped at the chance. Travel Massive is a networking and drinking thing for travel industry people that happens at a different bar on the first Tuesday of each month. It’s about as up my alley as anything possible.

Muni had fucked me again and I’d spent more time chasing buses than actually riding them, so upon descending into the basement of the Hearst Building, I was a schvitzy mess. Landing at the bottom of the stairs, I was greeted by framed newspapers from various dates showing off things as disparate as clothing ads from the late 1960s and Herb Caen columns. I didn’t dawdle too long, though. I needed a drink.

Walking from the landing into the main room I was astounded by its size. Local Edition is huge! Vintage typewriters (at this point are there any other kind of typewriters?) were randomly placed around the room on any surface that wasn’t a cocktail table or a banquette. The movie theatre like curtains that lined the back walls were complemented by low lighting and the little candles that dotted the tables. There was even a huge, old school projector projecting something that I didn’t bother to check out. After taking this all in I decided that Doug Dalton, and the folks from Future Bars, really went all out as usual. Having hit homeruns with the much smaller venues, Bourbon & Branch and Rickhouse, Doug and Co. absolutely rose to the occasion of outfitting such a large space. Being inside Local Edition made the thought of being a newspaperman (or woman) seem glamorous, like something special, like something that is gone forever and can only now be accessed with romantic hindsight and a well planned bar.

I caught up with Lauren and some other friends that I’d met through various travel related events. My buddy Mike McColl, who does a monthly adventure travel drink up, reminisced on one of the previous incarnations of the Local Edition space, “Man this place used to look like a 1980’s cocaine nightclub,” he told me, “There were mirrors everywhere and even little side rooms with tiny tables also topped with mirrors.” Looking around the room at the people drinking fancy cocktails made by bartenders in suspenders, I was glad the space no longer looked like it was a nightclub from Scarface. The Future Bars people even went so far as to create drinks with newspaper referencing names like “The Yellow Kid” and “The Masthead” and have the cocktail menu look like it was an old paper itself.

While finishing my drink and typing notes into my phone for this article I couldn’t help but wonder what Herb Caen would’ve thought of the place. Would the patron saint of ellipsis and vodka have ponied up to the bar and laughed about the fact that there was a bar turning his sacred profession into a museum piece? Who knows, it doesn’t really matter anyways. What does matter is this: Local Edition is a brilliantly executed idea and a great bar. With the right amount of booze in you and the perfect level of light, you might just be able to be nostalgic for a time that existed before you were even born…