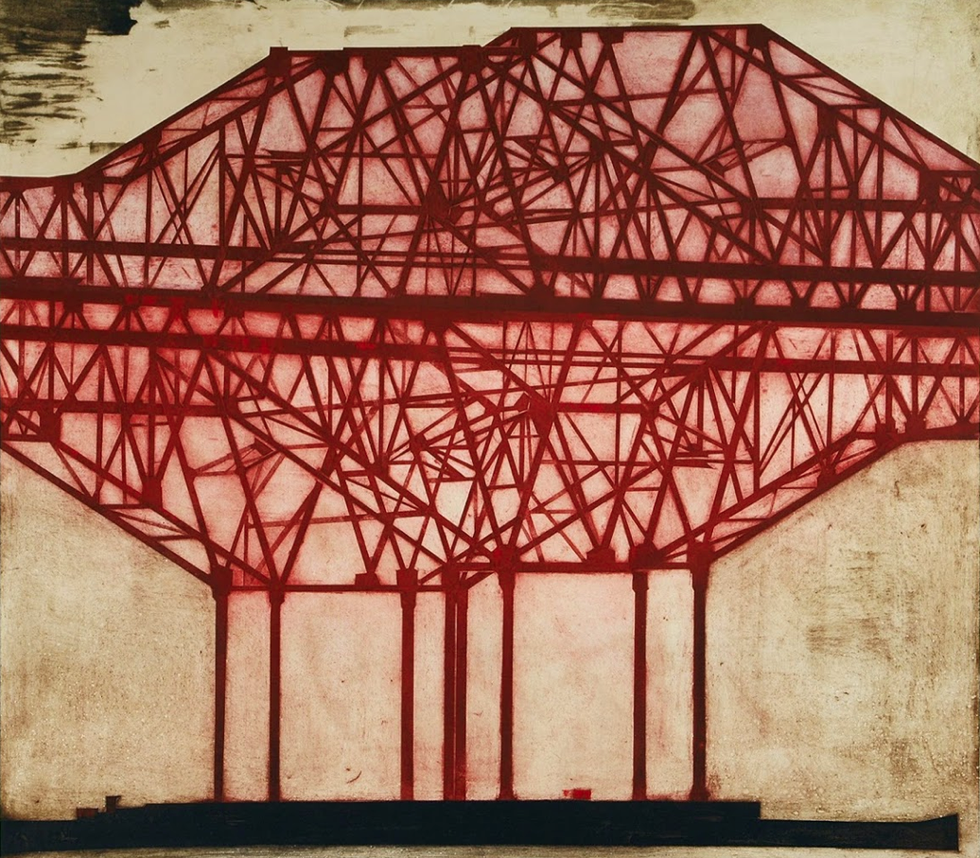 The ever-edgy Bill T. Jones/Arnie Zane Dance Company pivots around collaborative choreography and the integration of art forms. Catch the troupe's exploration of the laws of chance in /Time: Study I, a site-specific performance at CounterPulse, and then take a look behind the scenes in an exhibition of costumes, props, photos, and videos—including Keith Haring's backdrop design for 1984's Secret Pastures.

Music
Fiona Apple
When moody provocateur Fiona Apple teams with music industry vet Blake Mills, the only promise is uncertainty—which sounds like code for a fully improvised gig. Berkeley is one of just 12 spots on the intimate tour. Plus, who knows when Apple might disappear again.
When: 8 p.m., Tues. 10/8
Where: Zellerbach Hall, Bancroft Way and Telegraph Ave., Berkeley

Art
"Architecture Undigested"
The intermingling of art and architecture in "Architecture Undigested," curated by Jessica Silverman, is on display at Fused Space. The exhibition presents works that play off the surrounding environment in abstract and challenging ways. The rough stone, disjointed tiles, and bulging walls gives the impression of a collapsing building far past its prime. The show features works by Brian O'Connell, Mitzi Pederson, Ben Schumacher, Marte Eknaes, Petros Moris, Ruairiadh O'Connell, Stephen Prina, and Hugh Scott-Douglas.
When: Starting Wed. 10/9
Where: Fused Space, 1401 16th St.

Performance
Joachim Koester
Tarantism, presented by Joachim Koester, is a film installation featuring performers acting the "dancing cure." The dance, which consists of spasmodic, fitful shaking, appeared during the Middle Ages in Italy, and was believed to cure a tarantula bite. Come view Koester's examination of the body through the Italian folk cure, and participate in a discussion and Italian dinner.
When: 6:30 p.m., Wed. 10/9
Where: Headlands Center for the Arts, 944 Simmonds Rd., Sausalito

Talk
Jhumpa Lahiri
The thought-provoking writer Jhumpa Lahiri will sit down with Peter Stein to discuss the startling and serious content contained in her books and how she's made them works of success. As just one of the writer's in the "On Arts" series for the 826 Valencia Scholarship Program, Jhumpa Lahiri will share her feats as a Pulitzer Prize winner and well-reputed author of fiction. Her best known work is Interpreter of Maladies, however The Namesake has won its fair share of awards and Lahiri's latest novel The Lowland is bound to draw more praise.
When: 7:30 p.m., Fri. 10/11
Where: Nourse Theater, 275 Hayes St.

Exhibit
Day of the Dead
Be dead at this year's Day of the Dead exhibit. Bay Area artists influenced by current events, human experience, and Day of the Dead celebratory rituals create an enlivened atmosphere full of intricate, traditional altars and multi-dimensional art installations.
When: Starting Fri. 10/11
Where: SOMArts Cultural Center, 934 Brannan St.

Lit
Litquake
It's time again to hunker down for a week of syntax and storytelling at the annual literary festival Litquake. As always, the lineup includes luminaries such as local bestseller Joyce Maynard, novelist and screenwriter Jerry Stahl, Chilean writer Isabel Allende, and up-and-coming Italian author Viola Di Grado. But on the fest's penultimate day, brace yourself for the heavy hitters. On the docket are short story master TC Boyle, mistress of the taboo Mary Gaitskill, and Anne Perry, the English detective novelist whose own conviction for murder inspired the 1994 film Heavenly Creatures. And rivaling the LitCrawl for the week's most ribald moment is a reading of psychologist Jesse Bering's Perv: The Sexual Deviant in All of Us at the Armory Club.
When: Fri. 10/11–Sat. 10/19
Where: Various venues


Art
SF Open Studios
Support local artists at this month's citywide Open Studios, which garnered about $1,500 in sales for each participating artists in 2012. Look for Noe Valley visual artist Carol Koffel, who also designed the patterns and materials for BART's new seats.
When: Sat. 10/12–Sun. 11/10
Where: Various venues


Science
Mythbusters: Behind the Myths Tour
Look out for the myth-busting on-stage experiments by Jamie Hyneman and Adam Savage in the live stage show MythBusters Behind the Myths. The co-hosts of the Emmy-nominated series MythBusters presents a whole new batch of surprising experiments with audience participation, video, and behind-the-scenes stories. Fans will get to aid Hyneman and Savage in their mind-boggling and unusual scientific tests, and perhaps they'll help bust yet another myth.
When: 2 and 8 p.m., Sat. 10/12
Where: Orpheum Theatre, 1192 Market St.


Music
Lou Doillon
Lou Doillon's Places is a sigh of relief in the actress/international model's career. Mentor Etienne Daho helped support Doillon to launch into the unknown of music. At double platinum status in France, and with Doillon awarded Female Artist of the Year, the singer's debut in the U.S. is sure to impress.
When: 8 p.m., Sun. 10/13
Where: Great American Music Hall, 859 O'Farrell St.