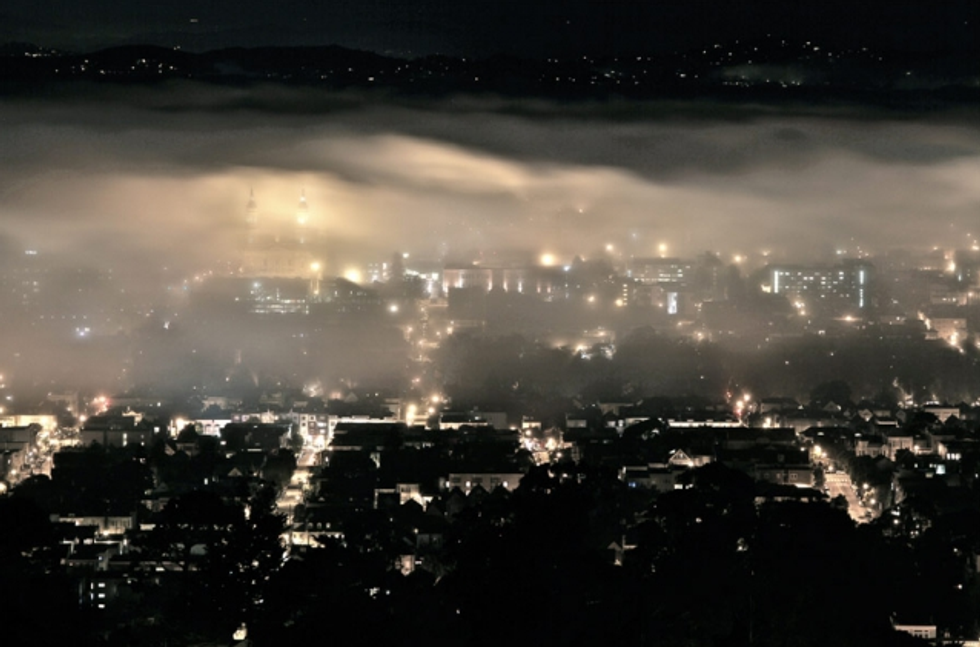 This Week's Hottest Events: Fog Film, Andrew Bird, and Ice Skating with Off the Grid

Art
"Unseen"
The inaugural exhibit for new contemporary gallery CULT, "Unseen" features the subtle energy and visual language of sacred geometry and abstraction in the works of five artists: Miya Ando, Miguel Arzabe, Chris Duncan, Klea McKenna, and Dean Smith. Through the use of shapes, vivid colors, swirling patterns, magnification and ethereal light, they arrive at abstraction in different ways. This show is a must-see for art lovers around town.
When: Through Sat. 12/21
Where: CULT, 3191 Mission St.

Film
A Cinematic Study of Fog in San Francisco
Presented in partnership with the Exploratorium's Bay Observatory and Cinema Arts Program, A Cinematic Study of Fog is the brainchild of acclaimed filmmaker Sam Green and cinematographer Andy Black (you might remember the two for their Oscar-nominated film The Weather Underground). Experience the beauty of this Bay Area phenomenon on film and see what existential feelings it evokes in you.
When: Through Sun. 6/29/2014
Where: Oakland Museum of California, 1000 Oak. St., Oakland

Theater
Tristan & Yseult
From the makers of the Wild Bride (one of the best shows to hit Berkeley Rep in recent years), this comedy is a love story with great music and clever staging. King Mark falls head over heels with his enemy's sister, prime material for endearing theatrical shenanigans.
When: Through Sat. 1/18/2014
Where: Berkeley Repertory Theatre, 2025 Addison St., Berkeley

Holiday
Off the Grid at Embarcadero Center Ice Rink
Six rotating food trucks will make your spin around the ice rink this winter that much sweeter. Skaters get four hours of comped parking, offering plenty of time for noshing and skating (not at the same time, of course). Look out for Sam's Chowder Mobile, Cupkates, Drip!, Johnny Doughnuts, The Chairman, and Me So Hungry Too.
When: 11 a.m. - 3 p.m., every Sunday through 1/5/2014
Where: Justin Herman Plaza

Music
Andrew Bird Gezelligheid
Never mind the venue—Andrew Bird's Gezelligheid is no religious affair. Making limited stops in Chicago, LA, and SF, this cozy performance brings together violin and Victrola, with accompaniment by guest musician Tift Merritt, for music that Bird says is "adapted to the atmosphere of the sacred space and season."
When: 8 p.m., Mon. 12/16 and Tues. 12/17
Where: Congregation Sherith Israel, 2266 California St.

Local
Rick Prelinger's Lost Landscapes
Rick Prelinger's ever popular Lost Landscapes screening of archival SF film clips is back for the eighth time. The first night sold out in a hot second, but there will be limited tickets available at the door the night of. For those of you who don't want to chance it, Rick decided to host a second night as a fundraiser for the Internet Archive, whose scanning facility was just seriously damaged in a fire. Do your good deed for the season, and splurge on the tickets for the IA fundraiser.
When: 7 p.m., Tues. 12/17 and 6:30 p.m., Wed. 12/18
Where: Castro Theater, 429 Castro St. and Internet Archive, 300 Funston Ave., respectively