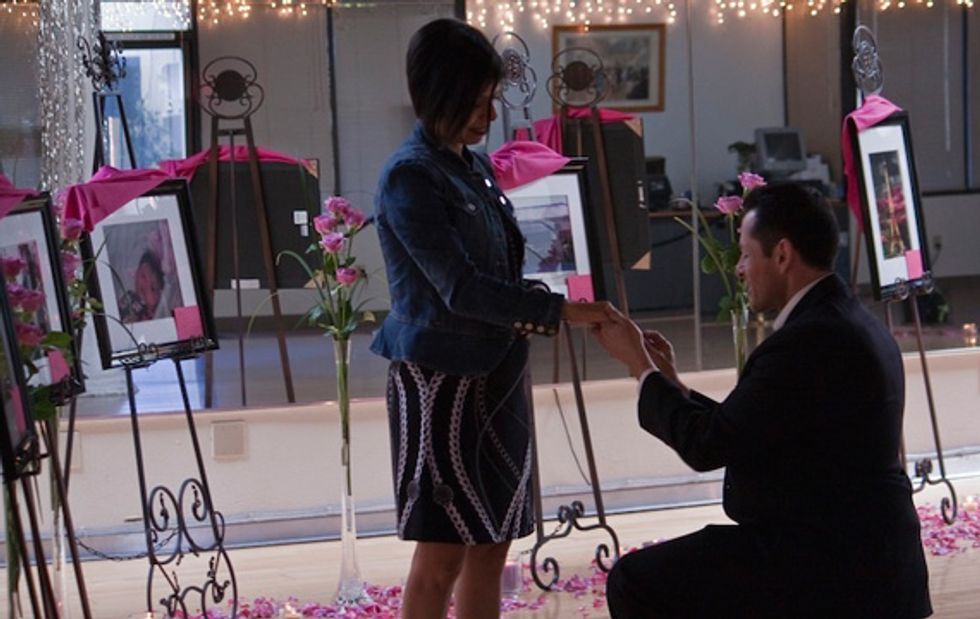 Last week we brought you the ultimate in creative wedding proposals, a “will you marry me” written in the sand on Ocean Beach. A lot of wanna-be grooms commented that Jason Fordley was making the rest of the male population look a bit, well, lame. Fellows (and go-getter women), if you haven’t got game, we’ve got your solution. Simply U Events, a wedding planning business that has recently expanded to Northern California, is providing help for the romantically challenged.

Owner and wedding planner Heather Vaughn saw a need for proposal services after hearing story after story of people who popped the big question, only to have it go over like a lead balloon. The response was immediate. Since launching what she calls her “Simply Perfect Proposal Package,” two years ago, she’s engineered more than 100.

But, although she excels in customizing the experience for clients (she asks a lot of detailed questions and requires them to fill out in-depth forms), she will not tell nervous suitors what to say. “I refuse to write a script for them,” Vaughn says. “I plan the whole thing and guide them through it, but they have to figure out the proposal speech by themselves.”

Shall We Dance?
For a Sacramento woman who loves to dance, the Simply U team filled a studio with meaningful photos on draped easels. The soon-to-be groom tricked his beloved into entering a dark studio and then pretended to go back out to the car. When the lights came up, she was prompted to lift the drapes, revealing photos of their baby girl, the Eiffel Tower (she also loves Paris), and (finally) him on bended knee. When she turned around, there he was in the classic pose.

Pretend Photo Shoot Engagement
Another set-up involved the guy luring his girlfriend onto a boat under the pretense of scouting locations for an advertising photo shoot. Once on the water the “scouting photographer” asked him to kneel on in front of her to test out a shot. To her surprise, her boyfriend then whipped out a diamond ring.

Artful Engagement
Vaughn launched another couple’s nuptials by having a man take his girlfriend on a vacation to San Diego. On a visit to an art museum, the pair was given a fake brochure listing the institution’s best paintings. The final artwork on the list wasn’t pictured. After pretending to be unable to find it, the BF excused himself, saying he needed to go to the restroom. He then called his girlfriend on her cell phone, saying he’d found the painting and telling her where to meet him. She discovered him in front of a painting showing him proposing to her. A picture is, indeed, worth a 1,000 words.

I ask you, who is going to say no when a question is framed like this? Prices range from $55 per hour for a brainstorming package (you leave with two ideas) to $499.99 for a more detailed plan.