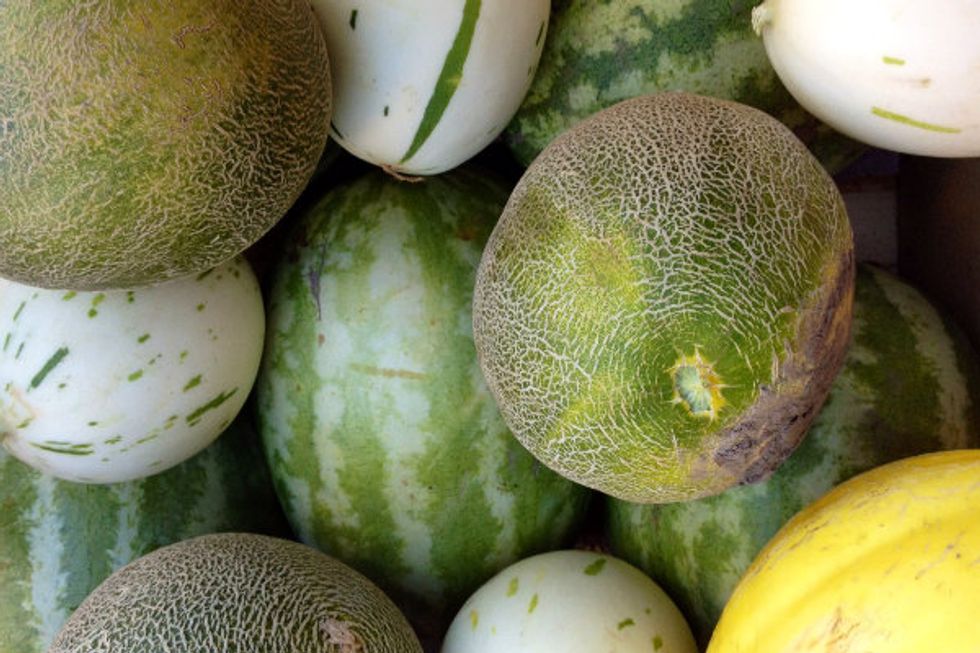 What to Get at the Farmers Market in August

It’s National Farmers Market Week, and there’s no time like the present to savor the late summer harvest while supporting your favorite farmers market. In August the Ferry Plaza Farmers Market is brimming with heirloom tomatoes, sweet summer corn, juicy summer grape varietals and peppers in a wide range of colors and piquancy. Here’s what not-to-miss this month:

Cucumbers are abundant at the market right now, but there’s also a plethora of other great vegetables to preserve for the months to come. Try your hand at pickled yellow wax beans, sweet cherry peppers, or tender baby carrots and radishes like the ones available at Marin Roots Farm. Adding a tannin-rich grape leaf to your jars will encourage a crisper pickle, and Lagier Ranches will be bringing a limited crop of them to the Saturday market this month for picklers to experiment with.

Known for their heady aroma and juicy flesh, muskmelons are at their peak in August. The many varieties in season right now include Crenshaw, Sharyln, Casaba, and Ambrosia, which vary in flavor from honey-like and sticky sweet to crisp and earthy. The best indicator of ripeness when choosing a melon is the smell, which should be fragrant and floral. Also don’t be shy about asking for a taste. As Everything Under the Sun farmer Bill Crepps, who grows several varieties of these summer treats, is fond of saying, “Sampling is mandatory.”

Apples made their glorious return this week, including the must-anticipated and short-season variety known as Pink Pearl. On account of its tart flavor, farmer Stan Devoto of Devoto Gardens and Orchards says this variety is not for the faint of heart. Pink Pearls have a crisp bite and pink flesh, and their acidity and dramatic color makes them well suited for desserts and applesauce. Stop by Devoto’s stand on Tuesdays and Saturdays in the next couple of weeks to try them for yourself.

Mountain Ranch Organically Grown has been bringing their pasture-raised poultry to market since 2009. This year they added guinea fowl to their operation. Less gamey than pheasant but richer in flavor than chicken, guinea hens make a lovely roast, while the carcass can be used to make a rich deep-flavored stock. Mountain Ranch will be selling the hens at the Saturday markets over the next couple of months.