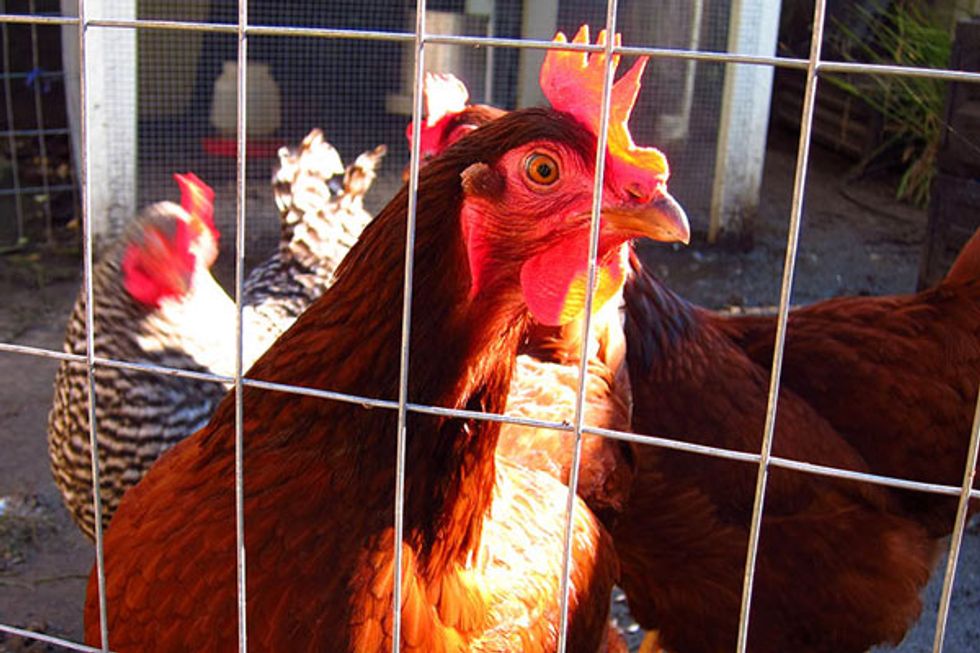 Why Are There Chickens in Golden Gate Park?

Take a left off of Fulton around 35th Avenue, and next to Spreckels Lake, you’ll find a long, shaded walkway that cuts deep into the thicket of trees that makes Golden Gate Park one of the most revered parks on the West Coast. The area around this part of the park is well known for it’s mysterious and sometimes hidden pathways that can lead to waterfalls, tiny statues, and massive soccer fields. But even more mysterious is the occasional shock of bright red comb and riot of plumage peaking out from the bushes—that's right, chickens. Chickens aren’t supposed to be there, and the parks department doesn’t officially recognize that they exist in the park at all, but YouTube videos, Reddit strings, Twitter posts, and Facebook photos all show that they are, in fact, roosting in the park.

But, to paraphrase the Talking Heads, how did they get here? All signs point to owners who buy chickens, either as pets or for their eggs, and end up letting them go by dumping them in the park. “In any urban area, it’s an issue because people don’t necessarily do enough homework before getting chickens and think it’s a viable solution to abandon them in public places,” says Christine Morrissey, sanctuary manager for Harvest Home, which educates the public on how to care for fowl, among other pets. “It’s something that pops up in Oakland and in major cities beyond San Francisco.”

Many news outlets have linked the fad of buying chickens to hipsters and young urbanites who want to help offset corporate farming with their own henhouse. But the increase in chicken purchases has also led to an increase in chicken abandonment. A shelter in Minneapolis had six calls in 2001 for owners looking to find homes for chickens, and by 2012, there were over 500, according to the Associated Press.

That trend is nothing new in San Francisco, where local shelters in the area currently have almost 200 chickens housed from owners who couldn’t handle the responsibilities of owning them. Harvest Home has even had to turn away callers who are looking to rehome their chickens.

Some of the problems are just biological: almost two-thirds of chickens in Bay Area shelters are roosters. There is a 5 percent chance of a chick growing up to become a rooster, which is illegal to own in SF. Morrissey adds that people who buy chickens for farming fail to realize that hens won’t lay eggs forever. “One of the issues that come up for people that have chickens is that once they drop off in egg production, people don’t want to care for them. They’re having these animals for the wrong reasons,” she says. Which has made many chicken owners turn to ditching them in Golden Gate Park.

In an open letter published last July on the website Golden Gate Park Ducks, a blogger wrote that 68 fowl have been dropped off in the park between August 2012 and July 2014, and more than 50 of them have gone missing. Morrissey explains that when chickens are left in the park and are not picked up by animal control, they are often attacked by other animals like raccoons.

But the San Francisco Recreation & Parks Department doesn’t have any indication that chickens are even in the park.

But with the few sightings that have been made and shared publicly, along with the horde of chickens in shelters, there’s a worry that not enough is being done, especially in terms of public safety.

“Right now, the avian flu is something that is affecting chickens throughout the United States. There is a possibility a chicken carrying avian flu being abandoned in Golden Gate Park,” says Morrissey. “There’s a number of issues at hand.”

Which begs the question—will the city ever give a cluck to do something about it?