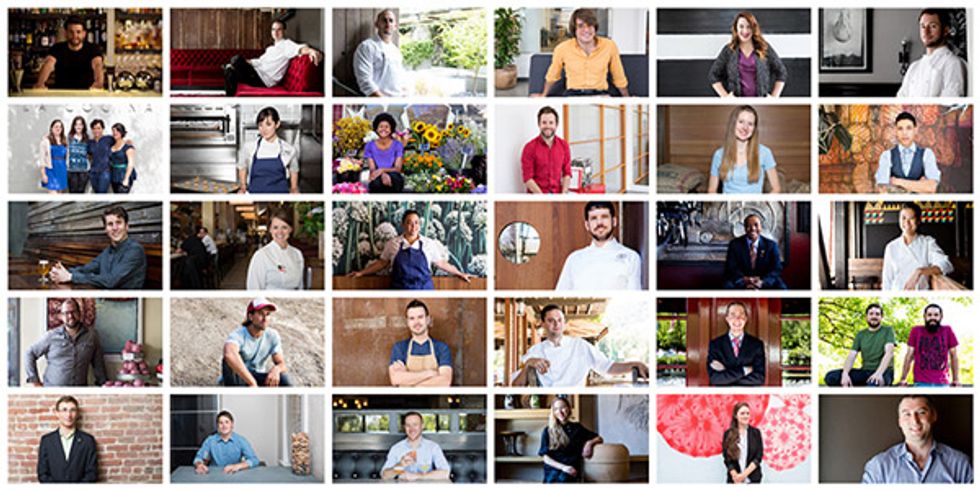 While 7x7 has traditionally done a list of the Hot 20 Under 40 (it's now just the Hot 20, we don't discriminate by age, and you can vote on this year's nominees here), Zagat started going city by city through their markets and naming their Top 30 Under 30 in the local food and drink scene. Today they're unveiling this year's list, and we have it for you below.

Paying homage to Zagat’s iconic 30-point rating scale, the guidebook's editors (now under the Google umbrella) pay tribute each year to 30 men and women who have already distinguished themselves in the industry and who "represent the next wave of culinary talent in San Francisco." This year's list includes a group of four women honored together, as they're all part of the team at food business incubatorLa Cocina, and a group of chefs, bar managers, pastry chefs, sommeliers, managers, and entrepreneurs all ranging in age from 22 to 29.

The youngest of the bunch is Maya Okada Erickson, head pastry chef at AQ and soon to take the lead as pastry chef at their spinoff properties TBD and Bon Marche. She got her start at 16 in the pastry kitchen of Elizabeth Falkner at Citizen Cake, and decided to forgo a performing arts career (her mom is one of the founders of dance company ODC) in order to study pastry.

Jessica Largey, the 27-year-old chef de cuisine at highly regarded Manresa down in Los Gatos for the last year, continues to attract accolades following on being named one of Eater's Young Guns last month.

And at 27, Spoonbar's Cappy Sorentino is one of the youngest bar stars to make the list. After mentoring with Spoonbar's opening bar manager Scott Beattie, he began making a name for himself by bringing some of the cutting edge cocktail trends in San Francisco up to Healdsburg, with a sophisticated cocktails-on-tap program, clarified milk punches, and house-carbonated cocktails. We spoke to Cappy, who's currently down at Tales of the Cocktail in New Orleans, and he says, "Seeing all the existing recipients of 30 Under 30 from last year, it's a great list, and a great honor." And he tells us that as soon as he gets back from the boozy conference, he's got a few new things up his sleeve at the bar. "I'll be doing a weirder menu, by request only. It's stuff I want to mess around with that we don't have menu space for, like a bunch of shrub-based cocktails, and old-school soda fountain cocktails, and stuff like that."

The full list of honorees, with their ages, is below:

See more details, and a slideshow, over at Zagat.