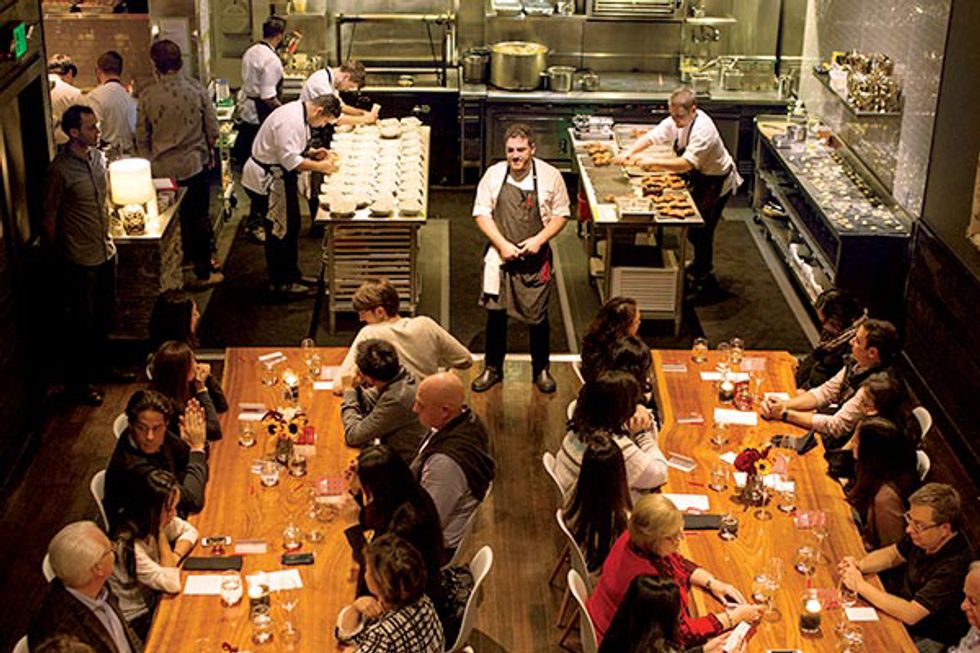 As a culinary mecca populated with world renowned chefs and recreational foodies alike, it makes sense that San Francisco is a hotspot for underground supper clubs. These social dining experiences can take place anywhere from a Victorian house in the Mission to a houseboat on the bay. They're often themed and typically feature local ingredients, but the off-the-grid aspect of the dinners is arguably their most alluring quality. Get a few friends together for a high quality meal without the pretense of a fancy restaurant, or go stag and meet interesting people over the multiple courses.

1. I Forgot It's Wednesday

Founded in NYC and recently started in SF, I Forgot It's Wednesday seeks to create a dining atmosphere that—true to its name—captivates guests with interesting conversation and ingenious pairings, causing everyone to forget it’s Wednesday. The five-course dinner is prepared by chef Jenny Dorsey and served with wine pairings and cocktails crafted by her husband Matt Dorsey. Jenny posts some of the recipes on her blog. The only rules of admission are: Be a nice person. Act respectfully. Bring an open mind. And be kind to the dogs. The location is super secret, but they do post upcoming events on the website. Join to the mailing list to stay updated about future suppers, and send an email here to reserve a seat.

After hosting garnished dinner parties for his classmates in law school, chef David Barzelay carried his culinary passion with him to Lazy Bear, where he started hosting supper clubs at various locations before opening up a brick-and-mortar version in the Mission. In honor of the traditional family-style shared eating experience, now Michelin-starred Lazy Bear remains as inviting and energetic as it did in its pre-restaurant days, where snacking and mingling kick off the feast, which is served to guests at long American elm slab tables. Barzelay cooks up modern American food complemented by seven to eight ABV pairings. Two seatings are offered each night, one at 6pm and one at 8:30pm. Purchase tickets in advance here, and subscribe to their Twitter feed to be kept up to date on upcoming events.

After Ko Son left his tech career in Silicon Valley, he turned his attention to the culinary world, inviting guests to dine at his beautiful Victorian house in the heart of the Mission. Son started hosting his underground supper clubs as a way to create an intimate atmosphere of food, wine, and art. Naked Kitchen offers talented emerging and experienced chefs the creative freedom to try out new and innovative dishes. Fill out the mailing list here and reserve your spot at the table online.

When Iso Rabins of forageSF isn’t hosting foraging excursions that include wild mushroom adventures, wild food walks, and sea foraging, he can be found heading Wild Kitchen’s roving supper clubs. Dinners take place at a large communal table located everywhere from a roof-deck or warehouse in the Mission to a houseboat in Sausalito. Each course of the eight-part meal features a sustainably foraged local ingredient, such as halibut, rabbit, wild boar, mushrooms, or miner’s lettuce, that has not been touched by human hands until the day of hunt and harvest. To attend the next Wild Kitchen and get a taste of Bay Area-grown delicacies, sign up for their email list here.

In 2010, five good friends joined together to meld sustainable ingredients and inspired cuisine into what would become Stag Dining Group’s successful Clandestine Dinner Series. Currently, they still host regular dinners that support a large network of local organic farmers, produce zero waste, and are landfill free. Each supper features some of the Bay Area’s leading artisans and artists. Stag has held dinners at historic mansions, shooting ranges, art galleries, and wineries. Their largest event to date, a one -of-a-kind foodie-concert called Mission Battleship, occurred on top of the Liberty Ship SS Jeremiah O’Brien. Dinners are promoted via their mailing list, so the best way to score a seat is to sign up here.

Brewer Eric Denman unites his libation skills with savory culinary pairings in a Mission apartment where he composes weekly themed meals. Dishes are made from fresh, local ingredients and paired with home brewed ales. To become a dinner guest, you must first be a member, and then the luck of the draw will determine if you get a seat—the list is composed randomly from the club’s database. This method encourages unique, engaging conversations and fosters new friendships and networking. To get added to the invite list, send an email here and tell them how you heard about the club.

Although chef Ben Long doesn't have any traditional cooking education, his secret and exclusive supper club (currently members-only) is built around he and his wife’s shared love for good food and wine. The eight-course dinner parties are held every month. The vibe is fun and casual, with emphasis on a good time and lively conversation. As Long puts it, “there’s nothing fancy about it except the food.” Although SPICE is currently not accepting new members, you can still try to get put on a waitlist by getting in touch here.

This underground dining experience is run by Vance and Kelly Rose, who curate a unique, seasonally-driven menu for their monthly nine-course spreads, featuring local ingredients such as produce, grains, fish, and meat, and paired with eight different wines. The setting is both personal and professional, with an emphasis on flavor combinations and complexity that is also present in the wine selections (the chef is also a winemaker). Members receive an email a week prior to the dinner that gives a preview of the menu and pricing; two days before the event, the location will be revealed. Sign up for the mailing list here.

Hearsay Supper Club’s founders Dan and Jeanne are self-proclaimed globetrotting food geeks who have a devotion to food and drink that is evident in their dinner parties. Periodically, they open up their kitchen to about a dozen guests, and serve a six-course tasting menu, paired with beer, wine or cocktails, that blends traditional and modern techniques. Occasionally, they host tasting events that highlight a single ingredient or producer. The best way to hear about their upcoming events, which are planned a month in advance, is to subscribe to their email list here or follow them on Twitter.

Shane Stanbridge and Marie Chia met while going to school at the Natural Gourmet Institute for Health and Culinary Arts, where they learned how to cater to special dietary restrictions and studied the techniques and benefits of cooking plant-based meals. After working at vegan, raw and gluten-free restaurants such as Millennium in Oakland, Pure Food and Wine in New York, and Michelin-starred establishments in San Francisco and Paris, the duo decided to form S+M as a way to create beautiful and sustainable dishes. Their current supper club series, The Blind Tiger, fuses quality local produce that is prepared using organic beer from Bison Brewing, and takes place in the Bay Area on every last Sunday. The locations, which can be held anywhere in San Francisco and its neighboring towns are sent to ticket holders as the dinner approaches, and the chefs sometimes host meals at their Oakland loft. Events are often BYOB, but Stanbridge and Chia do offer suggested pairings. Contact them here to join the mailing list or for other inquiries.