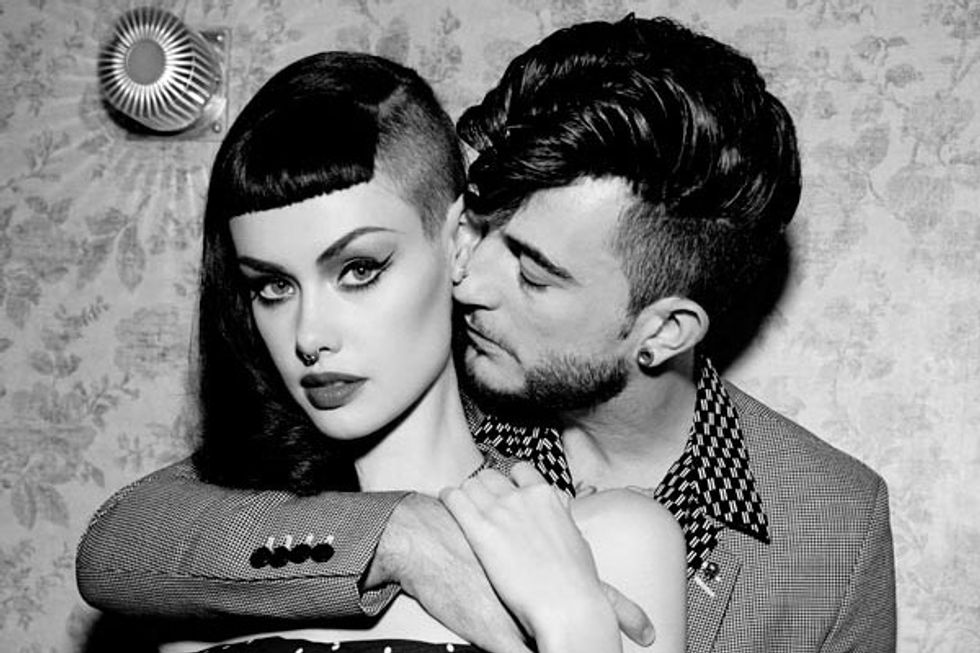 7x7 Magazine's annual Best of SF showcases all you could ever hope to eat, drink, see, buy, know, and do in the city. Here is the Best of Style:

The next big fashion duo á la Proenza Schouler and Dolce and Gabbana comes courtesy of our own Academy of Art University. Bethany Scott, a Fulbright scholar who studied textile traditions in Nepal, and her collaborator, Sabah Mansoor, have shown their yummy knits and tailored pieces at New York Fashion Week, earned a coveted spot at Macy’s Fashion Incubator, and won the Gen Art Fresh Faces Award in 2013. This fall, look for embroidered jackets to add to their essential pieces.

In wearable tech, we’ve been fixated on accessories for your face (Google Glass) and wrists (see Pebble Smart Watch), but Autodesk artist-in-residence, Dutch-born Anouk Wipprecht, reimagines the entire human body as host for her tech garments. At May’s Maker Faire, she showed a provocative collection of “interactive couture,” which included a dress that released a plume of smoke when its wearer came into contact with others.

Just in time for summer’s chilly temps, Mill Valley native J’Amy Tarr, a protégé of Michael Kors, designs fashion forward coats that fit like a glove. Her signature moto jacket comes in leather or iridescent moiré and has a flattering crop that hits just below the waist (read: no gratuitous flashes of midriff). It’s
a rebellious accent to layer over a flirty cocktail dress—combat boots optional.

The Electroloom 3-D printer—now in prototype phase—manufactures entire garments, reducing the people energy required to weave, cut, and sew. Better still, it is currently being programmed to achieve that holy grail of fashion design, the perfect fit. Inventor Aaron Rowley, recent winner of a grant from Alternative Apparel, has also been awarded membership in the SF incubator TechShop. Look for the fruits of his futuristic loom by year’s end.

Guideboat Co., opened by avid rower and Restoration Hardware founder Stephen Gordon and YouTube cofounder Chad Hurley, stocks boats and such aquatic accoutrements as British army knives, vintage oars, and Freeman windbreakers. Among the offerings for summer, camp shirts made of genuine madras cotton, in case a passage to India—or the
Hamptons—is on the bucket list.

Michelle Snyder, the hairdressing genius behind Zooey Deschanel’s famously blunt bangs, opened the local outpost of her West Village salon this past May, bringing not only her celebrity cred (she counts Karen Elson, Sienna Miller, and Zoë Kravitz as clients) but also a slice of NYC bohemia to our fair city. The library-like salon is decorated with Snyder’s favorite tomes, Audobon prints, and illustrations by local artist Lena Wolff. Fair warning: Due to the neverending stream of cool kids who come and go, this chop shop’s got a three-month waiting list.

Worn by World War II pilots and later seen on the members of such Summer of Love bands as Jefferson Airplane and the Grateful Dead, Golden Bear—a 1920s heritage brand—has always had cachet among SFers. In the past year, J.Crew and Japanese retailer SHIPS have collaborated with the brand to create varsity jackets, and its latest capsule collection with Unionmade features a collegiate spin on the windbreaker, which comes in bright nautical colors and features corozo nut button accents.

The retail strip’s strict chain store ban is up for debate, but in fashion, where exclusivity is a mark of uncompromising standards, it has led to an influx of cultish boutiques. Chic but not flashy, Fillmore has become a Marais–meets–West Village with in-the-know brands from Paris (Sandro and coming attraction, The Kooples) and New York (Rag & Bone, Steven Alan, and NARS) joining local favorites Elizabeth Charles and Curve.

From Palo Alto (by way of Paris), this zero-waste label of gamine blouses and sundresses has landed several magazine features, including Vogue. The brand created a sold-out capsule collection—you might recognize pretty prints from Oakland textile princess Stevie Howell—for Gwyneth Paltrow’s lifestyle website, Goop. Husband-and-wife founders Christoph Frehsee and Linda Balti are channeling their popularity for good: Through their T(r)EE collection, they’re planting a tree for every tee they sell, with the goal of reaching 100,000 trunks in the ground by 2015.