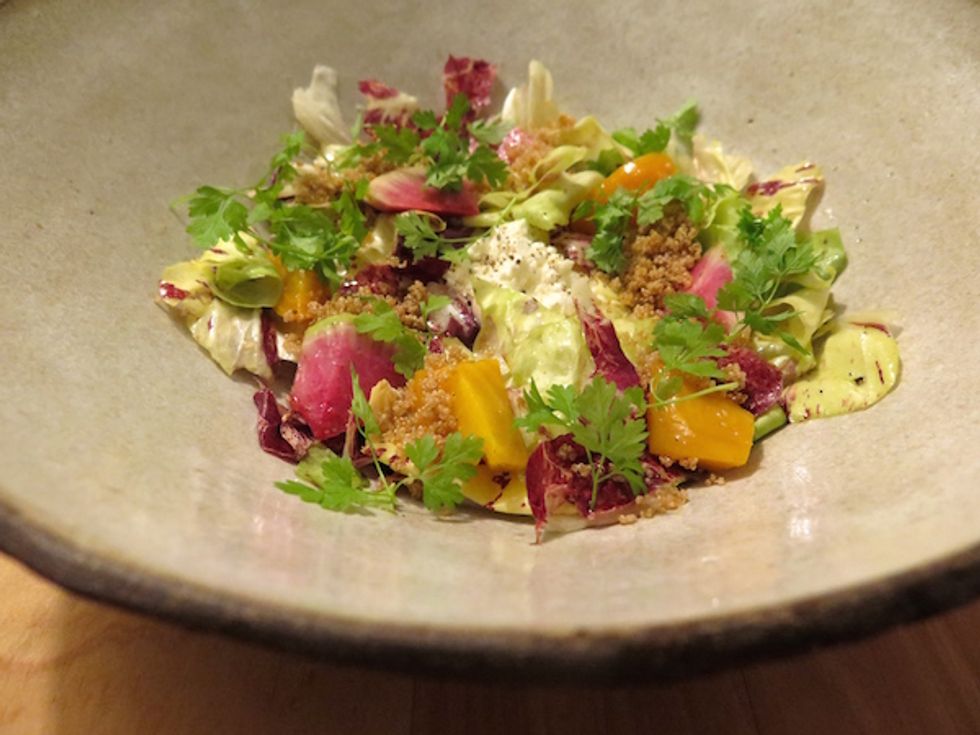 5 New Places to Check Out This Month

Looking for somewhere new to eat? Here’s your monthly cheat sheet of five brand-new places that recently opened around town.

Anyone who lives, works, or shops downtown will want to add this Union Square newcomer to their list. Past fans of the fab little bar Big will now find bartenders Brian Felley and Mo Hodges behind the stick here, so already things are rad. There’s also a menu full of European-inspired dishes by chef Sam Fechheimer of the neighboring Klyde (also in the Hotel G, but a separate project). The 124-seat space is pretty snazzy, a bit luxe-meets-industrial, with raw beams, blood orange velvet banquettes, and botanical wallpaper. Bar and dinner nightly. 398 Geary (at Mason), 415-654-5061

San Franciscans have been waiting for this opening for some time: the folks behind the ever-packed Burma Superstar opened a new location in the Mission shortly after Christmas. While you’ll find some Burma Superstar faves on the menu (hello, tea leaf salad and samusa soup), this isn’t a Superstar facsimile: the menu features dishes you’d find at a family gathering, with a lot more seafood, and look for the heat meter to be a bit more dialed up. (The prices have also climbed a notch.) The space is pretty good looking too, with grey leather banquettes, scallop tile, and there’s a bar that will be serving cocktails (soon), which is where you’ll be waiting for your table, because, yup, the lines are already here too. 5pm–11pm daily, and lunch will be added soon. 211 Valencia (at Duboce)

There’s a new addition to the dining scene in the Mission, one that’s a bit avant-garde and definitely unique. Chef Val Cantu has moved from pop-ups to this 25-seat restaurant, where he’s offering a nightly tasting menu for $57. The food is modern and innovative, pulling influences from Mexican and Californian cuisine. His wife, maître d' Carolyn Cantu, has really tricked out the space: it’s chic, dimly lit, and has some fun artistic flair (she was formerly with Ken Fulk’s design firm). Don’t expect a menu when you sit down (it comes at the end), so anyone with ingredient issues or concerns will want to let them know when you book your reservation (which also has a cancellation fee, by the way). Open Tuesday–Friday: 5:30–10pm; Saturday: 5:30–10:30pm. 3115 22nd Street (at Mission), 415-757-0994

Another Union Square addition is this new beer hall, and it doesn’t have that dark tavern/reclaimed wood look going on at all—it’s actually quite contemporary and eyecatching. The beer list is major, featuring 30 on tap from around the world (local beermeister Rich Higgins assembled the list). Your brew comes to you served in proper glassware, too. Also, you won’t go hungry: Morgan Hamm of Le Beau Market crafted the menu of housemade sausages and snacks, ranging from lamb to vegetarian to pretzel bites. Open daily 6pm–1am, lunch coming soon. 582 Sutter (at Mason), 415-361-5500

The most-anticipated opening of late is this hot tamale: the sequel to State Bird Provisions. Chef-owners Stuart Brioza and Nicole Krasinski opened this new concept just next door to SBP, and there’s a new dining format and full bar. This is definitely a place you’ll want to come to with friends: the menu is formatted in a shared/family style, with each table ordering however many dishes you want (choose from about 15 or so) that will come out in waves (six dishes are $65 per person). Among the favorites people are already buzzing about include the housemade ricotta, the sunchoke roti, squab, black cod fried rice, and lamb scallopini. The airy space is full of crafted touches, from the dishware to the tables, and there’s an exciting wine list by Jason Alexander. Tip: follow @theprogress_sf for suggestions on last-minute reservations. Dinner nightly. 1525 Fillmore (at O'Farrell), 415-673-1294