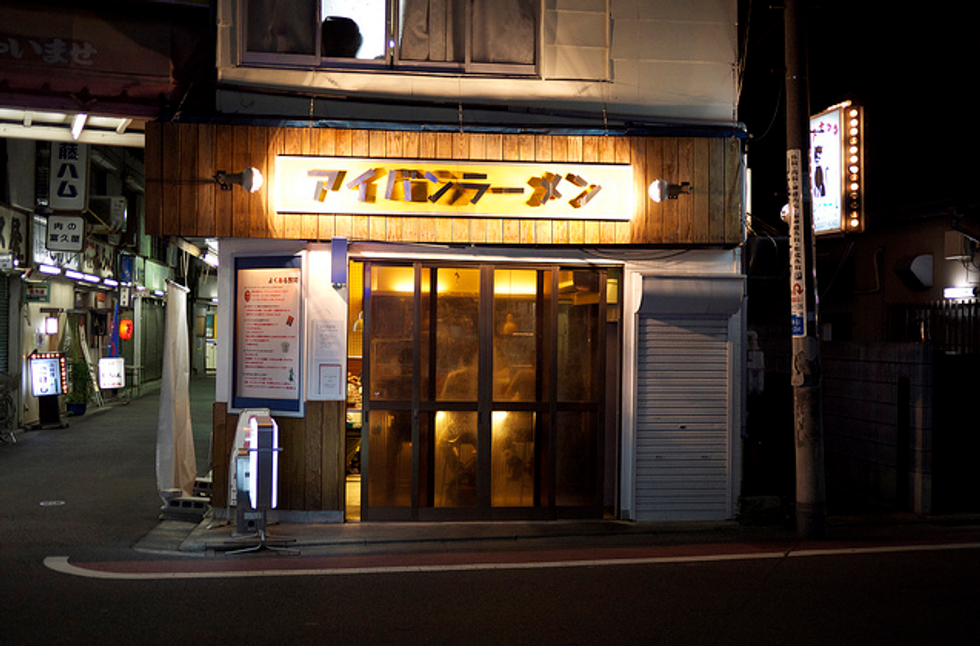 A Taste of Japan: Slurpy Noodles, Rare Salt and Kudos to our Hometown Boy

I’ve attended almost every Culinary Institute of America at Greystone World of Flavors conference in St. Helena since they started with Mexico way back when. These conferences are for food professionals only, which is a shame because they are phenomenal. I always get to try something I’ve never had before. That first year, way back when, it was traditionally-made conchinita pibil—a pig roasted in the ground (they actually dug a pit on the grounds of the CIA) by an expert pibil maker from a village in the Yucatán—a man who had never been out of his village, much less hung out a castle-like facility such as the CIA. When Rick Bayless called him up on stage to receive a warm applause from some 500 people, he wept. I wept.

Last weekend was the World of Flavors: Japan conference. To say the least, it was a little more buttoned up. There were 40-some chefs/experts that flew over from Japan to participate. It was a conference that took three years to pull off. Relations had to be fostered, Michelin-starred chefs had to close their restaurants for the first time ever (well, one did) in order to attend.

There was umami talk everywhere, not to mention kombu and dashi. I watched pale-green new-harvest soba being being hand-made by masters that follow a recipe that's been handed down for five generations. What a brutal workout it is to whip that dough into shape. Crunch needs to pick up on this: Soba Sweat. The flash of Japanese knives was everywhere. I’ve never seen so many menacingly beautiful specimens.

This year, my first-ever taste was of shrimp brain. It was shrimpy and unctuous—if small. A chef who runs a famous tempura shop in Tokyo scooped them out of the shrimp and cooked them up before frying the rest of the shrimp.

The usual cast of American chefs and writers was there too, including Thomas Keller, Chris Cosentino, David Kinch, Douglas Keane, Alex Ong, Ruth Reichl, Mourad Lahlou and so on—a powerful bunch. I don’t think there’s been a time when American chefs haven’t been more influenced by Japan.

The take-away from these conferences is so overwhelming that I’d bore you if I recalled it all (or I’d spend the next week writing it). Here’s my very abridged version. Japanese for cheaters.

• From the lecture on Japanese cuisine and health, I took away the fact that Americans are doomed. The Japanese (although more doomed now that they’ve been Westernized) are still some of the healthiest people in the world due to their fire and water ways of cooking and fish, vegetable and tofu–based diet. Here is some Japanese food for dining thought:

• Ruth Reichl talked about Japanese food in American history and basically how long it's taken us to embrace it. The first review she could find of a sushi restaurant came from a reviewer in SF in the 1970s who called it “most delicious, delicate, with a flavor of raw oysters.” (Raw oysters probably being the only reference point he had.) She also discussed how the “cuisine of FedEx” changed everything in the US when it came to fish, which could suddenly get to cities all over the country overnight. She surmised that the current street food movement is directly related to people raised on sushi—people used to watching their food be made for them right there. (Not sure I can agree with that, but it's an interesting thought.) Reichl concluded by saying that while the sushification of America is complete, we now need to move onto a new frontier: the frontier of texture.

• Speaking of texture, one of the most delicious things I had at the conference was made by Kyoto's Masagasu Yonemura. Who has hair that is dyed blonde with something of a perm. It was a slipperly little bowl of soy milk custard topped with sea urchin, basil seeds (which, if you put them in water, kind of puff and turn slippery) and fresh wasabi. As I was loving it, a guy from the CIA who I was speaking to practically gagged on it, claiming he was too American for the texture. Guess we have a ways to go with this.

• Almost every chef had a translator. One chef from Peru was speaking of the health benefits of some horseradish-type root and it he translated as saying that the root was good for women with "gynecological problems." I really don't think that this was a correct translation. I hope it wasn't.

• Some of the best noodles I had were made by a white guy named Ivan Orkin from Ivan Ramen in Tokyo. Orkin is from New York and moved to Tokyo to follow his dream of opening a ramen shop there. Now that’s ballsy. But damn the noodles I tasted (udonlike noodles made with some whole wheat flour too) were amazing. He served it with a soymilk dipping sauce. I fell in love, as did about everyone else there.

• Some of the other best food I had was made by another white guy from our very hometown: Nick Balla of Nombe was there. I really feel like Balla, if put in the right restaurant with the right ambiance, could be the city’s Japanese Charles Phan. His food hits that mark between authentic technique and Calfiornia brightness. Read Ruth Reichl's account of the conference and she gives him a shout out too.


• Not all salt is what it’s cracked up to be. As one Japanese chef passed around some fancy ancient salt from some ancient part of Japan—salt that he claimed only he had access to—Ruth Reichl, who was sitting next to me, put a bit on her tongue. Wondering what she thought of it, I asked. She replied, “If I closed my eyes, this could be Morton’s.”

• Umami might be considered the fifth flavor. But that's just the beginning. Expect to hear more on sixth, seventh and even eighth flavors soon.