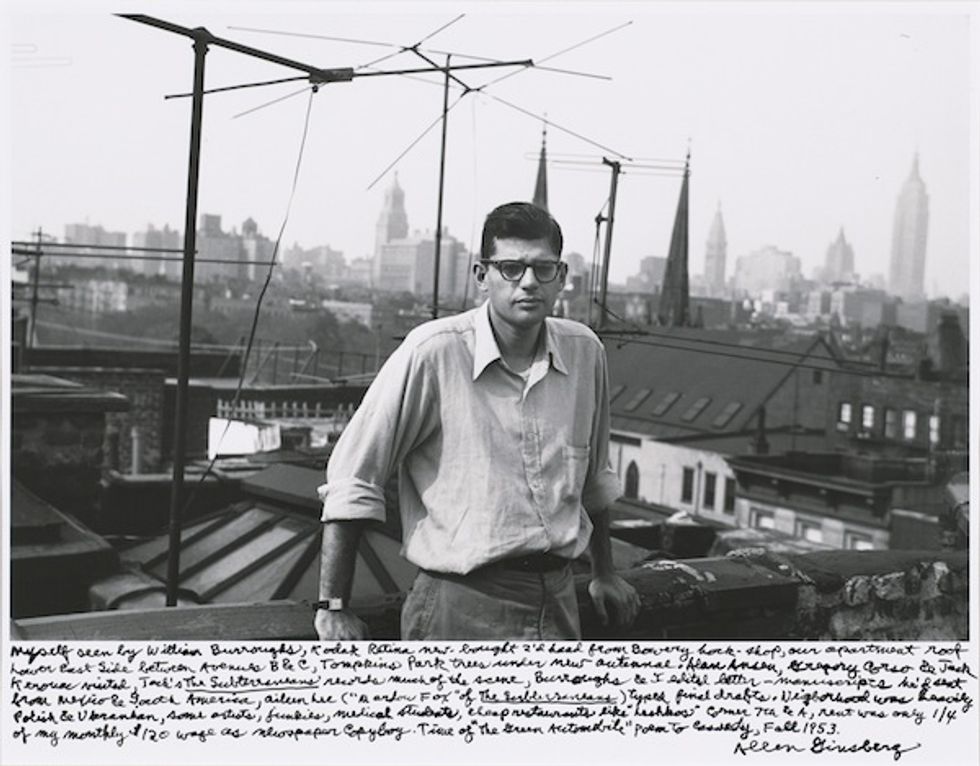 Allen Ginsberg's Photographs On View at the Contemporary Jewish Museum

This subterranean culture is well documented in works like Jack Kerouac's On the Road or Allen Ginsberg's "Howl." However, Beat Memories, now at the Contemporary Jewish Museum, would seem to offer a rarer pleasure: Visual access to the beat world, in the form of several dozen photographs taken by Allen Ginsberg.

But as a record of beat culture, Beat Memories is actually a little lackluster. Spanning about forty years, the photographs are striking in how similar the ones taken by young Ginsberg, during the heat of things, are to the ones taken by old Ginsberg, long after the movement cooled. Early photographs capture quotidian scenes like, for instance, Ginsberg grinning on the roof of Manhattan apartment building, William S. Burroughs dispensing advice to Jack Kerouac on a sofa, or Ginsberg's grandmother heading the dinner table. In later photographs, Ginsberg treats the viewer to a nude selfie taken in a hotel room, Burroughs poses by an Egyptian codex on an outing to the Natural History Museum, and another writer devours Chinese take-out. This is not to say that the photographs aren't tender, vivid, or funny, but the oft-mythologized scenes of beatnik hedonism and reckless adventure are nowhere to be found. No doubt, posterity was on no one's mind in those moments.

The series does offer at least one new treasure, ironically in written form. Upon exhuming these photographs in the 1980s, Ginsberg captioned each of them with a handwritten note describing or giving background to the scene at hand. Facilely poetic, these jottings bring the photographs to life with vivid details, such as which Brahms sextet was emanating from a neighboring apartment at the time, how a friend's mother had just suffered a botched surgery by a drunk surgeon, or that the substance of Burrough's advice to Kerouac was that he needed to quit visiting his mother so much, lest he find himself inextricably "wound in her apron strings."

Beat Memories, if a little boring, does open an interesting route of access to Beat culture–namely, through the perspective of an aging Ginsberg looking back. The lives depicted here look substantially quieter than the prevailing mythos would have it, but are clearly exceptional nonetheless, and rendered all the more vivid through a loving act of recollection.