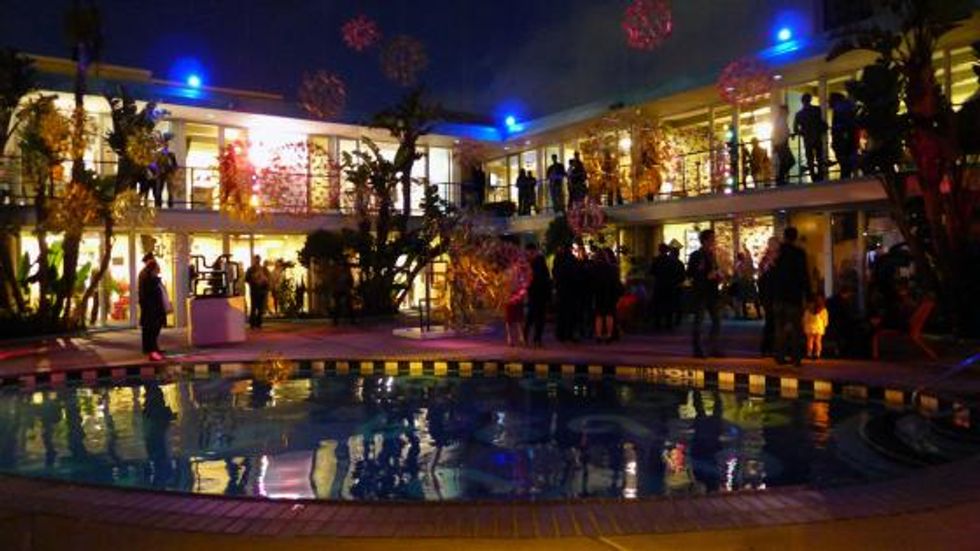 Attempt to hit all seventy booths at this year's artMRKT (May 16 - 19) in Fort Mason Center, and you're going to stagger out bleary eyed and capable of remembering maybe the first three things you saw. ArtPadSF (May 16 - 19), the smaller and hipper of the two art fairs, will itself be hosting thirty-five galleries in the pool-side rooms of Larkin Street's charmingly retro Phoenix Hotel – still a heaping serving of contemporary art.

Having made many a mistake at art fairs past, we've come to realize that there's only one way to go: Limit your itinerary to a handful of promising galleries and spend time with the art and gallerists in them. The whole booth construct is a less-than-ideal way to show art, but fairs do present the opportunity to visit galleries from around the country and the globe, chat with their representatives, see what artists they're excited about. From San Francisco to Birmingham to Berlin, here are our must-visit galleries for each fair.

CCG bid farewell to its Minna Street space last month and is now preparing to relocate to Potrero Hill (assuming all goes according to plan). That means that artMRKT may be your only chance this summer to enjoy its stellar artists roster – which includes Sandow Birk, Walter Robinson and collaborative duo Andy Diaz Hope and Lauren Roth.

Swarm's booth will be a bittersweet spot for Bay Area art lovers. The Jack London Square-based gallery and studio, which proved itself to be one of Oakland's stand-out spaces, is shuttering for the foreseeable future. This may be your last chance to pay a visit to the gallery, which will show the photographic work of Adam Katseff, among others.

Originally from Chicago, this gallery now operates out of a space in Berlin, where it represents a number of all-star artists including Thomas Ruff, a German photographer who has explored the digital frontier of his medium, and Normunds Braslins, a Latvian painter known for his sumptuous style laden with art-historical reference.

If you've only ventured into Krowswork amid the chaos of Oakland Art Murmur, then a visit during the at least somewhat more relaxed conditions of the Phoenix Hotel is a must. The gallery focuses on video art – one of few Bay Area spaces to show true dedication to the medium – but also represents artists like Mark Baugh-Sasaki and Liz Walsh, who brilliantly blend media.

This Mission District gallery made headlines this winter for nearly burning itself down when Paris-based collective Claire Fontaine ignited its central piece, "Burnt/Unburnt" – a map of the United States consisting of thousands of matchsticks that, upon burning, are meant to leave scorch marks in the shape of our country's borders. It left a little more. This commitment to risky, politically-pointed art, however, is what makes the gallery worth following

One of our favorite galleries from the Los Angeles' Culver City arts district, Luis de Jesus represents a strong roster of artists working in media that range from painting to performance. Ken Gonzales Day's recent exhibitions have been particularly impressive. In them, the artist has used photography to mine the racial history of the California landscape and as well as the sculptural depiction of race, as embodied in specimens found in museums around the world.

Formerly on Geary Street, Marx and Zavattero has been between locations for the better part of the last year. The gallery represents a fantastic roster of artists with a focus on painting and mixed media canvases. Their booth at ArtPad will be a great opportunity to see work by the likes of Arngunnur Ýr.

$6 million Presidio penthouse has windows and views for days