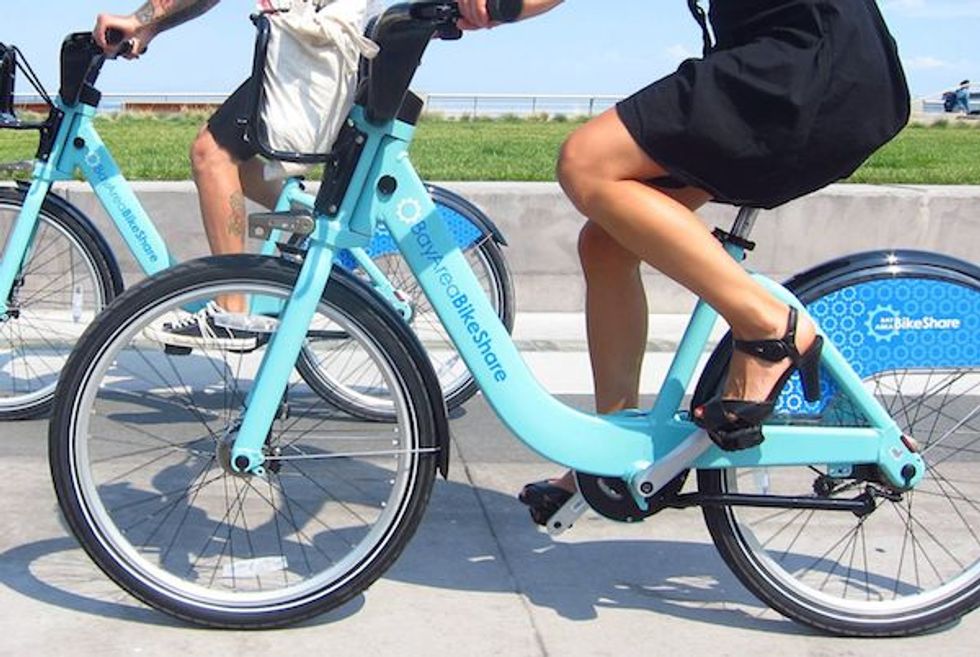 Back in 2013, the Bay Area Bikeshare system launched. Around 700 light blue bikes were set up around San Francisco and San Jose, available for people to rent for an hour or more to scoot about town. Two years later, the program, considered an astounding success with nearly a half million riders, plans on not only adding 7,000 more bikes but also expanding to the East Bay. Sweeeet.

"This 7,000-bicycle expansion of bike share will be a major expansion of our public transportation system," said Noah Budnick, executive director of the San Francisco Bicycle Coalition. "It will improve mobility for generations to come. Making bike share bicycles and stations accessible to all will give San Franciscans a much-needed convenient transportation option."

With over $15 million in funding allocated to the Bike East Bay program, an estimated 1,400 bicycles will come to stations in Oakland, Berkeley, Richmond, and Emeryville by the end of 2017. So, you know, you'll have to wait.

Bay Area Bikeshare has been a boon for those of us who don't drive. (Remember, one of the many benefits of living in SF is that one doesn't have to drive!) From getting to your regular BART station to heading to gym, the temporary bike system takes the hassle out of owning and maintaining your own cycle.

Places like Paris, Chicago, New York, London, Barcelona, Shanghai, Wuhan, and Hangzhou have already seen major success with similar bike sharing programs. And best of all, it's a comparatively more affordable and inarguably more sustainable way of transportation. If you want to check out the bike sharing system, look at the many stations already available in San Francisco... and get pedaling.