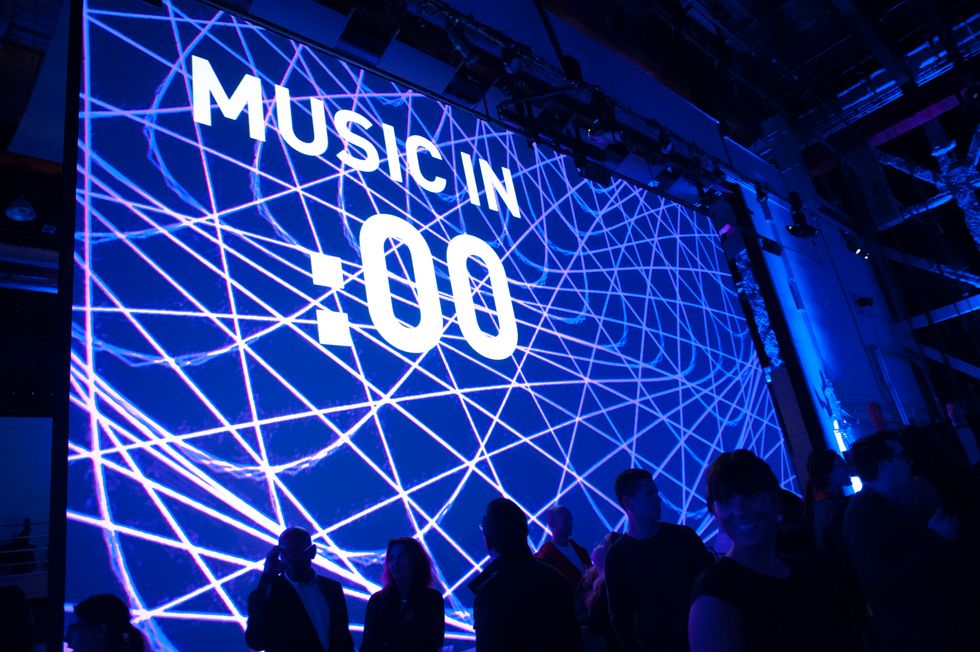 Smart Arts: SF's Classic Cultural Institutions Get Hip to the Next Generation

San Francisco's most venerated arts establishments are connecting with the next generation of audiences through modern, electrified programming, interactive events, and plenty of booze.

If you were to take your little black dress or your best suit out for a Saturday-night date at one San Francisco's most venerable arts institutions—we're talking the opera and the theatuh—you will most likely find yourself sipping chardonnay amongst the over-50 set. Which is great if you are (a) over 50, (b) strategically steering clear of local millenials, or (c) just really like the opera and the theatuh. But what does it mean for the millenials and the young-at-heart who have sophisticated tastes in art but crave a more modern way to engage? And what does it mean for our hallowed cultural institutions whose lifeblood is the audience, and whose future success absolutely relies upon capturing the next generation of fans?

In San Francisco, a city that seems to get younger by the day, it means that artistic companies, some of them established more than a century ago, must dust off their marketing and programming strategies and get with the ubiquitous buzzwords of the day: Disrupt. Connect. Experience. Inclusive. And we have to hand it to them—the city's most celebrated stages are rising to the challenge. In the past year alone, the stately halls of the Civic Center and downtown Theater District have made a real effort in reaching out by fully reinventing the way we experience their art forms.

Suddenly pop-up performances, hyper-modern lounge settings, cocktail bars, and chilled-out dress codes are de rigueur in houses once best known for their posh society galas. Some have even gone as far as to encourage use of social media during performances through the use of hashtags—a thing that would be considered sacrilege in the main house. But guess what? It's working. See how four of San Francisco's most beloved cultural establishments are getting hip to the next generation.

When was the last time you attended the opera? If this question catches you blinking at the ceiling like a Kit-Cat clock, it may be because you know that a night at l'opera is a serious commitment of your time, money, and carefully selected attire. For some, especially those M-worders, the barrier for entry is simply too high to scale. But the San Francisco Opera has sensed your pain: Witness the newly created SF Opera Lab, which promises to be nimble, eclectic and even, gasp, modern. Elkhanah Pulitzer, the Lab's programming director, refers to it as the R&D wing of the venerable house.

“We’re an incubator of ideas," says Pulitzer, sounding more Silicon Valley than Civic Center. "We can hybridize the art form and discover new ways to foster storytelling. You can think of us as creators of operatic mashups.”

Such an experiment deserves a stylish innovation lair, and the Opera Lab has it in the new 299-seat Dianne and Tad Taube Atrium Theater, located on the fourth floor of the freshly renovated Diane B. Wilsey Center for Opera on Van Ness. This so-called R&D arm sits in the former Veterans Building adjacent to the War Memorial Opera House, which seats a whopping 3,146 opera fans.

“The smaller space allows for a greater sense of intimacy, both for the audience and the performers,“ says Pulitzer. “It allows us to advance the discourse of the art form itself.”

On March 11, she'll put the venture to the test with the Lab’s inaugural performance of Winterreise, Franz Shubert’s romantic song cycle of love and loss. If it sounds like the same old opera, picture the 80-minute performance, consisting of a single baritone and a pianist, surrounded by bespoke stop-action films projected onto the theater walls. Created specifically for the event by South African artist William Kentridge, the cinematic works will act as visual cues to Shubert’s language.

The Lab’s inaugural season consists of just five shows, from March through May 2016, and promises an eclectic line up: Svadba-Wedding (an a capella piece for six female voices about a Serbian wedding); ChamberWORKS (an hour-long performance of two pieces of chamber music); The Triplets of Belleville Cine-Concert (a live performance of the French film's score accompanied by the movie); and Voight Lessons (a one-woman show written by Terrance McNally and starring soprano Deborah Voight).

While tickets aren’t exactly cheap (they range from an affordable $35 to a more hefty $125), they are considerably less than standard opera tickets. Plus, Dede's theater (as we like to call it) will blessedly have a bar. That means you can enjoy your cocktails during the performance—the seats even have cupholders, go figure. In addition to in-house performances, Opera Lab has been playing the pop-up game with recent appearances at The Edwardian Ball and Public Works. Look out for another op-up (get it?) on April 1st at The Chapel.  //  SF Opera Lab, sfopera.com/sfoperalab

“Soundbox is our attempt to break as many rules as we can, while altering everything about the space, and still keeping our focus on the quality of the music,” says Richard Lonsdorf, SF Symphony associate director of artistic planning, about the newly electrified yet once hidden venue that is Zellerbach Rehearsal Hall A.

Situated behind a Franklin Street door once used mainly by performers and crew, Soundbox made its sold-out word-of-mouth debut in December 2014. Since then, the raw space has come quite alive as a makeshift lounge and gathering spot for the cool kids in town. And because it's acoustically dazzling—equipped with the same Meyer Constellation Sound System as the Taube Atrium Theater—Soundbox has what it takes to power truly brilliant performances that might scandalize the stage at Davies Hall—back in December, Aussie burlesque performer Meow Meow climaxed with an operatic orgasm to Schulhoff’s Sonata Erotica.

(That said, the Symphony itself is to be commending for upping its cool factor in recent years with main-stage performances from the likes of Janelle Monae and orchestra-accompanied screenings of movies ranging from The Nightmare Before Christmas to E.T.)

But one of the most incredible things about Soundbox is that it manages to achieve both a level of intimacy and also feel like a nightclub that we in our post-clubbing prime actually want to hang out in. With room for just 500 people, the space has a way of making every guest look interesting, each curious about the other. Every evening is curated by a different person to different themes. And since the room itself is bare bones, each night takes on a life of its own with original art installations, moving stages, projected imagery, mobile furniture, standing room, and a full bar with cocktails and snacks. The audience is encouraged to move around during performances and to share their experiences on social media.

When discussing Soundbox, Lonsdorf and choral maestro Ragnar Bohlin are practically giddy: “We get to play some of our favorite pieces, works that rarely, if ever, are performed in the main house," says Bohlin. "And the sound in here is sublime, it’s tangible. Playing baroque or modern American chamber music is simply exciting.”

Soundbox's first event of 2016 season, last weekend’s Transcendent, quickly sold out—tickets tend to run out on day one. To stay in the know, sign up for the email list.  // Soundbox, sfsoundbox.com

In 2015, in its own quest to make friends with younger audiences (who may not be racing out to see Swan Lake or The Nutcracker again), the San Francisco Ballet looked to James Buckhouse, a visual artist whose body of work is a creative hodgepodge of cinematography (Shrek, Madagascar), production design (New York City Ballet), fine art (at the Guggenheim and Whitney museums), and UX design (Twitter). Currently head of content at the VC firm Sequoia Capital, Buckhouse joined the Ballet as host and curator for an all-new dance experience: Sensorium.

Working closely with choreographer Christopher Wheeldon, the two conceived of a dynamic happening that would include shorter pieces of dance bookended by pop-up displays of costumes, toe shoes, and hair and makeup sessions; autographs with the dancers; and a DJed dance party in the basement of the War Memorial Opera house. The debut was a hit.

On March 23rd, Sensorium makes its second annual return with Buckhouse again at the helm. Dance lovers can look forward to a 90-minute performance of two works—Yuri Possokhov’s Swimmer (based on a John Cheever story) and William Forsythe’s Pas/Parts 2016. There will again be interactive art installations as well as a “pool” party afterward. Tickets ($29-$150) went on sale February 24.  //  Sensorium, sensoriumdance.com

A bright coat of red paint isn't the only thing that's fresh at the American Conservatory Theater's renovated digs at The Strand. Inside the Mid-Market venue, A.C.T. is taking something of a Writers With Drinks approach, inviting theatergoers to directly engage with performances via themed pre- and post-show events and to commune with the actors over cocktails.

This past fall, for example, in tandem with A.C.T.'s run of Monstress—about the experience of Bay Area Filipino immigrants—the theater displayed Filipino art and held Filipino-American open-mic nights after the show. Currently, if you buy a ticket to see the The Unfortunates (through April 10), you can join in the singalong happening at the bar, tended by three of the cast members. Post-show, you may order another drink and mingle with the cast in the lobby.

But while boozing is now encouraged during performances at all A.C.T. theaters, publicist Kevin Kopjak says to keep your phones in your pockets: “We don't encourage tweeting, texting, or photos during the show—just great immersion and real live reactions!” Perhaps it's nice that some traditions still hold.  //  A.C.T. Strand Theater, act-sf.org