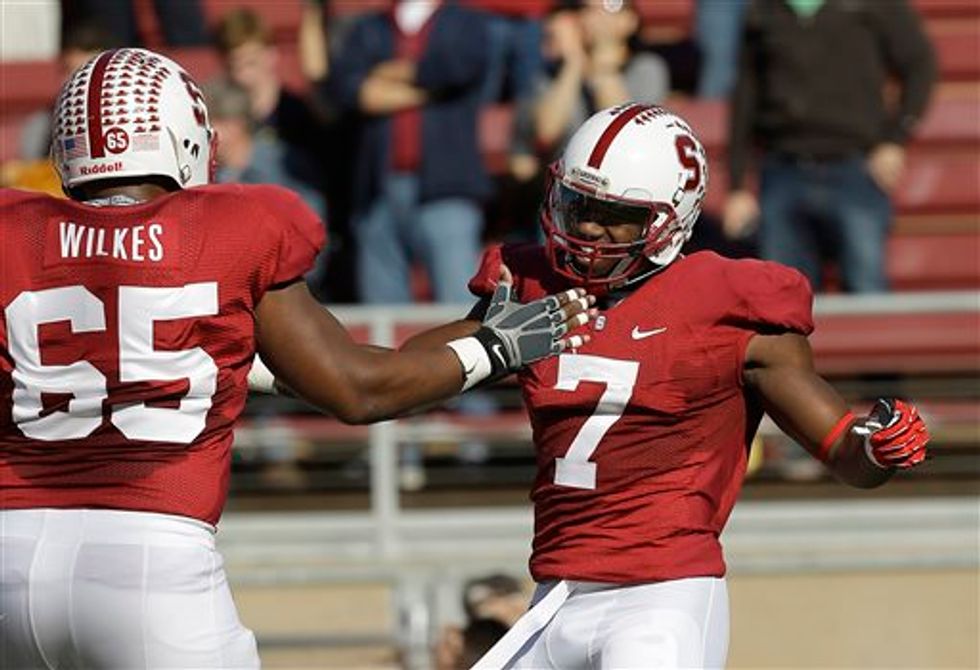 The Big Game happened, but oddly the game with the biggest Stanford-related implications didn’t even take place in the Bay Area.

Stanford mercilessly smashed rival Cal 63-14 on Saturday, but the win bore even greater significance when word spread that Pac-12 frontrunners Oregon was shocked 42-16 in Tucson by Arizona.

With the Rose Bowl seemingly a pipe dream after the Cardinal fell to USC a week ago, Stanford is now on track to compete in the Pac-12 title game (likely against Arizona State) with a trip to Pasadena for the Rose Bowl on the line.

In fact, with the game quickly out of hand in Palo Alto, the student section supporting the Cardinal started chanting “AR-I-ZONA” as news trickled of the Wildcats’ upset win over Oregon.

Roses, it seems, may be in the cards, after all.

Lost amidst the hoopla of new life for Stanford in the Pac-12, Stanford quarterback Kevin Hogan had himself a day against Cal’s putrid pass defense.

Hogan tossed career-bests in both touchdowns and passing yards with five and 329 yards one week removed from a middling performance against USC.

“After this game, he’ll come back Monday and he’ll be upset about the three of four things he didn’t do right. That’s just how he’s made.”

Stanford finishes up its regular season next week against Notre Dame.

Hudson back in the Bay

Tim Hudson made his name in Major League Baseball as a stalwart member of the Oakland A’s, but it will be in San Francisco now where is latter years will be remembered.

And it looked as though an East Bay return was in the cards, too.

The 38-year-old Hudson had been a member of the Atlanta Braves since 2005 but ultimately decided to sign a two-year deal with the Giants worth $23 million as opposed to returning to the A’s, a team he made his MLB debut with in 1999.

“I just think the whole package there (in San Francisco) is something that I’m looking forward to at this point in my career,” Hudson said in a recent interview on KNBR. “It’s a great stadium, it’s a great pitchers’ park, the fans are awesome – they’ve had sellouts every game since 2010.”

For Giants fans, the love affair is mutual. Hudson sports a career 205-111 record with a 3.44 earned run average. The diminutive Hudson should also provide a steady guidance for Tim Lincecum, as the former adjusted in his later years without being able to rely on a once-electric fastball.

Soccer FootySF, a local group aiming to build a larger football (the variety played with one’s foot) community will be holding a viewing benefit on December 7th at McTeague’s on Polk Street for the MLS Cup Final.

Donations will be accepted at the door and all donors will be automatically be entered into a halftime raffle. There will also be food and drink specials during the match, starting at 12:30 p.m.

The proceeds will go to Street Soccer USA-Bay Area, a group whose mission is to transfer job and life skills to homeless young adults through soccer.