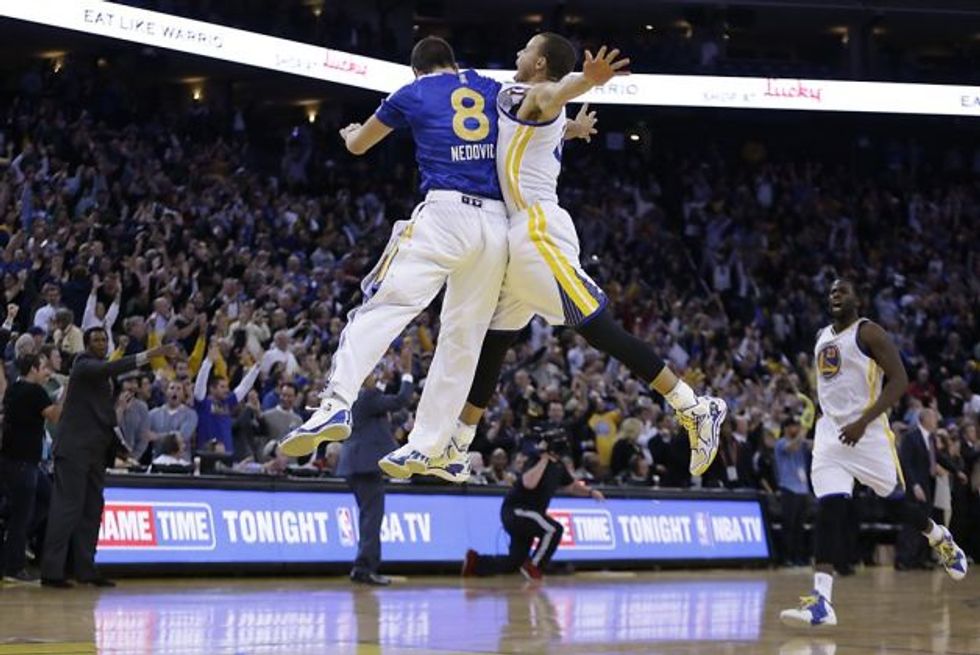 Give this much to the mercurial and oft-middling Warriors: they’ve got a flair for the dramatic.

On one hand, Stephen Curry continued to edndear himself to the Bay Area with a last-second game-winner in a white-knuckle 95-93 victory over the Mavericks. On the other, something of a recent trend, the Warriors had to claw back from an 18-point deficit.

They also continue to struggle against top-notch competition, as evidenced by Friday night’s 116-112 defeat to the Houston Rockets. It was another game that required a late Warriors flurry to make things interesting.

Turnovers (18) continued to plague Golden State, which sits a game behind Dallas for the eighth and final playoff spot in the Western Conference.

“I thought we competed, battled and fought, but we were careless at times,” Warriors coach Mark Jacksontold the San Francisco Chronicle. “We did a lot of good things, but we turned the basketball over, and that costs you.”

On the bright side, Curry’s theatrics also prompted him to call himself the second most clutch player of all time, behind Michael Jordan. Some guy you may have heard of.

It’s not all inconsistency for the Warriors, though, Friday night marked the 48th consecutive sellout at Oracle Arena.

Read about in in the Chroniclehere.

No Seahawks-beating hangover in Florida

The stage was set for a letdown-like game for the 49ers: early start time, long travel, struggling team and a week removed from a pivotal win over a hated rival.

Well then, Colin Kaepernick and friends quickly put an end to any thoughts of a “trap” game. The 49ers kept their stranglehold on the NFC’s final playoff spot with a comprehensive dismantling of the Tampa Bay Buccaneers, 33-14.

Kaepernick continued his string of impressive displays, throwing for 203 yards and touchdown strikes to Michael Crabtree and Vernon Davis. Davis’ touchdown was of the 52-yard variety, with Kaepernick hitting him perfectly in stride and the speedy Davis couldn’t stop after hauling in the ball, slamming into the wall behind the end zone.

San Francisco (10-4) exerted its dominance early and often, surging to a commanding early 17-0 lead and never looked back.

“That’s what he always gets across to us, especially this week,” cornerback Carlos Rogers told the Chronicle in reference to coach Jim Harbaugh’s don’t-underestimate-anyone approach. “Because anyone can get hyped up for Seattle. But now when you come in and play a team like Tampa that has (four) wins, how did you get hyped up for that? At 10 a.m. our time? But he lets us know what we have to do every week and as players we take ownership and go out and get it done.”

The 49ers now conclude the regular season against Atlanta and a potentially playoff-deciding trip to Arizona to face the upstart Cardinals.

Certainly, the Raiders have had a few signs of life this season. At least glimpses into hope for the future in spite of another losing campaign.

Said glimpses were few and far between on Sunday. Kansas City scored 56 (!) points, the most the Raiders have ever allowed to an opponent in a 56-31 thrashing.

The Raiders (4-10) actually came within four points at one point, but elusive Chiefs playmaker Jamaal Charles broke the Raiders’ backs by the form of a 71-yard touchdown scamper.

Charles tormented the Raiders with five touchdowns on the day.