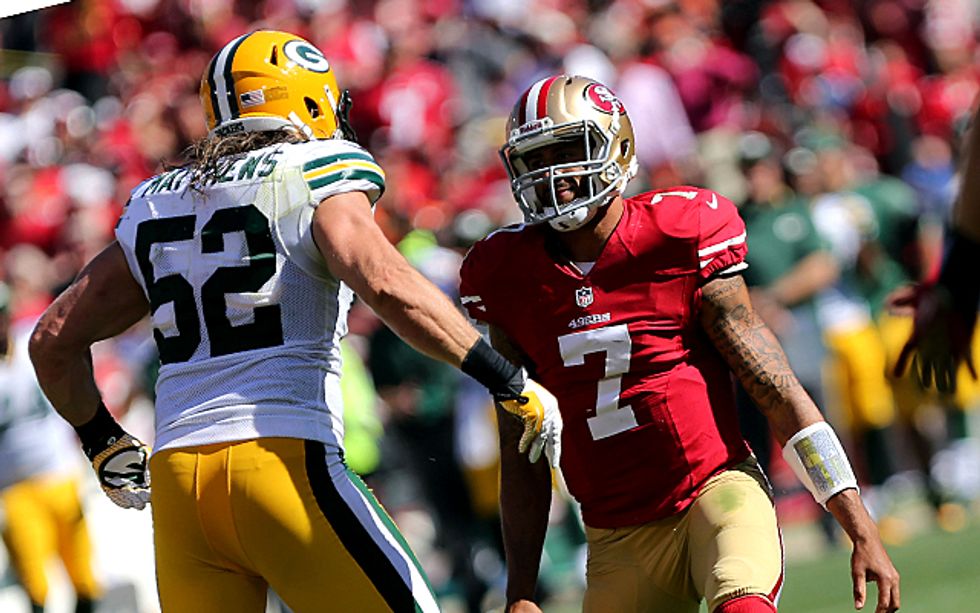 When Phil Dawson nailed a 40-yard field goal as time expired to secure a 23-20 victory over the Arizona Cardinals, he accomplished two things: he clinched a hard-fought road win over a divisional opponent and booked the 49ers a trip to Green Bay to meet a familiar “friend.”

With the win, the 49ers finished the regular season with an impressive 12-4 record, but only the No. 5 seed in the NFC since they couldn’t overtake Seattle in the NFC West.

So to Lambeau they go.

Their opponents, the Green Bay Packers, stumbled to an 8-7-1 record, but still have home-field advantage since they won the NFC North. The Packers’ record is misleading, though – they played the latter part of the season without quarterback Aaron Rodgers. Rodgers, a native of Chico who grew up a 49ers fan, only returned to the team on Sunday to lead them to a last-ditch victory over the Bears. He had been coping with a broken collarbone.

49ers fans will sleep well leading up to Sunday’s 1:40 p.m. kickoff knowing that San Francisco has defeated the Packers each of the last three meetings, including in last season’s playoffs and this season’s opener.

But two of those meetings were in sunny San Francisco and the one victory in Green Bay was in the fall, not January.

Next Sunday’s forecast in Green Bay calls for 25-degree weather with a chance of “snow.” (Reports tell us it’s some form of cold, white, miserable substance that plummets from the sky.)

Ordinarily, a seven-game road trip would seem to be a daunting undertaking.

Thankfully, on the heels of a highlight-filled week, the Warriors are hardly playing ordinary.

Golden State ripped off four consecutive victories, including a tense 105-103 victory over the Los Angeles Clippers on Christmas night. So for now, the Dubs are riding high as they head east for 13 days, which features a trip to Miami against the two-time defending NBA champion Miami Heat.

“It’s a test for us to continue what we’ve established the past four games,” Stephen Currytold the San Francisco Chronicle. “Early in the season, we performed for four or five games, and then had a dead period for two or three straight games.

“We know what’s ahead of us. We’ll be on the road together, battling for two straight weeks, and we’ve got to come out ready to play.”

The trip got off to a flying start on Sunday night, even if they didn’t make it easy on themselves, coming back from a 17-point deficit in Cleveland to nip the Cavaliers 108-104 in overtime.

While most of the country (hand raised) will be spending New Year’s Day rehydrating and trying to wash the shame off, Stanford will be competing in the athletic feat of many of the Cardinal’s players’ lifetimes.

As a result of their conquering of the Pac-12, Stanford will compete in its second consecutive Rose Bowl and its fourth consecutive BCS game.

This year, the Cardinal will take on Big Ten champion Michigan State. Even though they’ve become a mainstay in Pasadena around the new year, the significance still isn’t lost on them.

“It’s almost weird to feel like we were just here,” Stanford coach David Shawtold the Los Angeles Times. “It’s no less special. “It’s just as exciting because the Rose Bowl is different than any other game.”