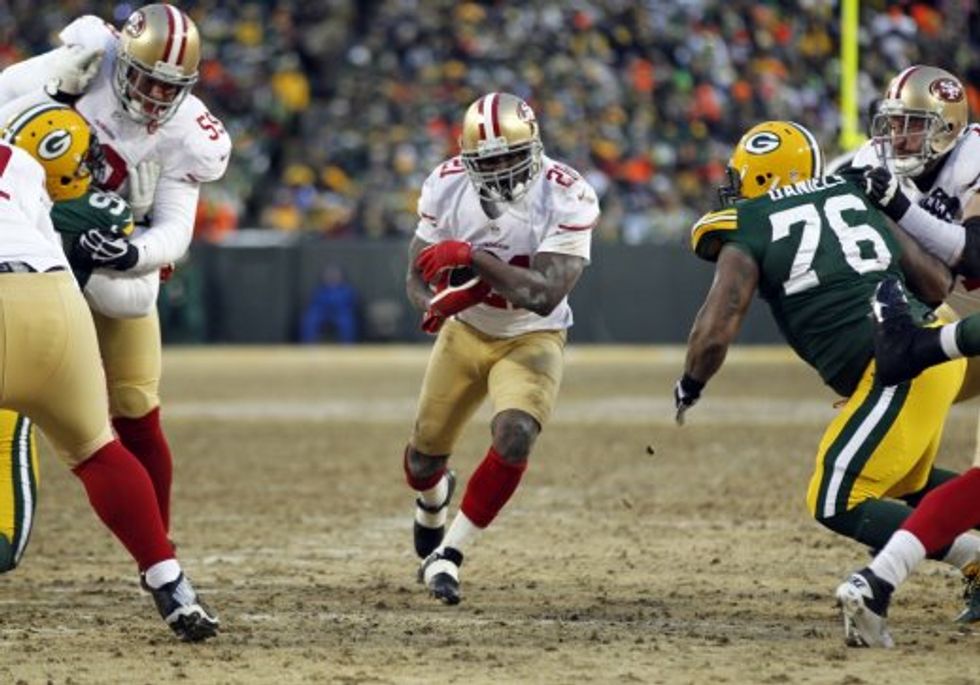 To Colin Kaepernick, in the end, the temperature was just that: a number.

Much was said and debated about the frigid temperature of the 49ers’ playoff battle in Green Bay against the Packers.

Would they freeze to death?

Would the ball spontaneously combust at the first sign of impact?

These are the questions that are asked as Californians when our beloved 49ers go to Wisconsin in a game that was once assumed would be the coldest game in NFL playoff history.

When the ball was snapped, though, it was a cold but not historically cold five degrees, and Kaepernick and friends were hardly fazed en route to a wild 23-20 victory.

Kaepernick, a native of Wisconsin, led a game-winning drive in Hellish conditions so Phil Dawson could chip in a 33-yard field goal as time expired to fire the 49ers to the next round.

Next up is a rematch with the Carolina Panthers in the divisional round.

This, however, is a 49ers team that’s riding high on a seven-game winning streak.

Third-year coach Jim Harbaugh is now 4-0 against the Packers since taking the reins to the 49ers. Kaepernick threw for 227 yards and rushed for another 98 in a winning effort.

“Just trying to figure out a way to get that first down,” Kaepernick toldESPN in reference to a late third-down run to give the 49ers a first down with under two minutes remaining. “Had a play called, we didn’t get the look that we wanted. It worked out for us.”

As a result, to Carolina they go. Kickoff is at 10 a.m. in Carolina. In spite of the Panthers’ triumph over the 49ers in the Bay Area earlier this season, the 49ers are confident in reversing their fortunes.

“They got us the first time,” NaVarro Bowman said. “What’s on our minds is to get them now. It’s the playoffs. Win or go home.”

We all knew the Warriors would be good. But can they be historically good?

In two games far from home, we should know.

Golden State embarked on a long road trip a week ago with high hopes. Said high hopes were, and have been, vindicated and then some as the Warriors have won their first five games and if they win the next two will tie an NBA record for the most consecutive road wins in NBA history.

The streak has been no small task, either.

The Warriors (23-13) dumped the defending NBA-champion Miami Heat and relied on a game-winning shot from Andre Igoudala on Friday over the Atlanta Hawks to keep the hot streak alive.

Igoudala made a three-pointer as time expired against the Hawks to earn the ‘Dubs a 101-100 victory. He also hit a game-winner this season against the Oklahoma City Thunder.

Golden State only has to topple middling Brooklyn and Milwaukee in order to tie the NBA record for consecutive road wins.