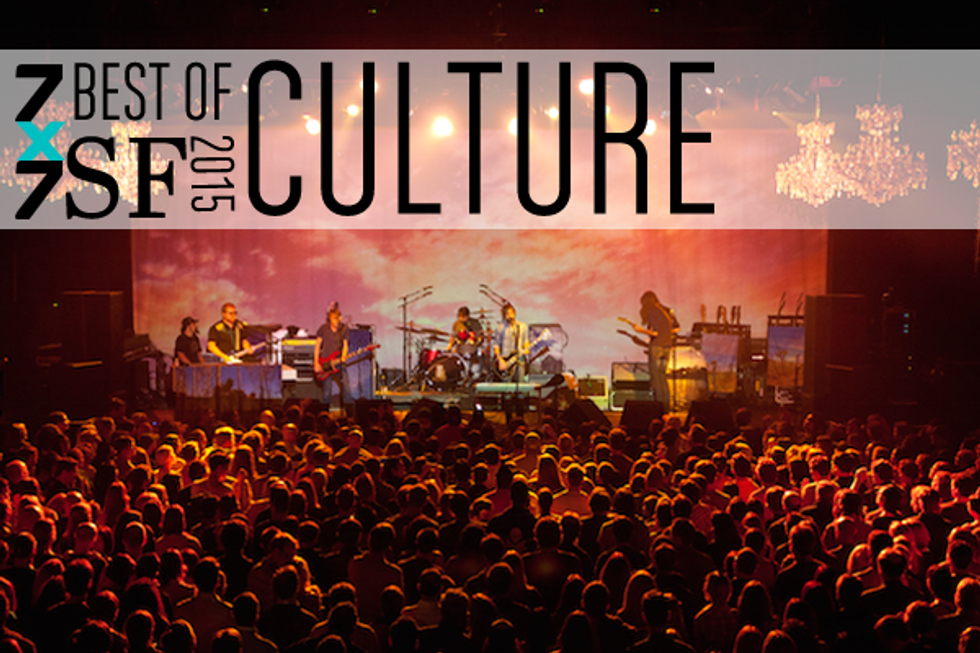 Whether you're headbanging at the Fillmore, streaking naked down Hayes Street, or hitting up a printing class in Emeryville, there's always something fun to do in the Bay Area. Here are some of our favorite pastimes in 2015.

Erin Fong and Taylor Reid, the creative duo behind Western Editions, an Emeryville-based letterpress, customize invitations using a huge 1960s Vandercook press. The friends and former roommates founded their company out of a mutual passion for the craft and, they admit, “all things cute," but it's the team’s skillful use of off-beat colors, old-timey fonts, and whimsical illustrations, that make their fun prints seem like pure magic. —Sarah Medina  //  (Emeryville), westerneditions.com

The massive renovation of the midcentury architectural marvel once known as the California Masonic Memorial Temple includes enhancements such as a state-of-the-art sound system and cocooned “Zeppelin” chandeliers—finery befitting such classic bands as Daryl Hall & John Oates and the Pixies, both of whom took the stage at the freshly minted SF Masonic this year. If you're looking for somewhere to relive the glory days of classic rock, this is it. —Leilani Marie Labong  //  1111 California St (Nob Hill), sfmasonic.com

IfOnly meets The Onion in Well Deserved, “the premiere marketplace for privilege.” Founded by Kasima Tharnpipitchai (CEO, CTO, Chairman, Head of Product, Senior VP of Design, Thought Leader in Privilege, Mensa Applicant, Mom’s Favorite Son Who Got an “Excellent Work!” Sticker in the 3rd Grade), Well Deserved is a new leader in the sharing economy, serving up unused entitlements with a white glove and a wink. Here you’ll find rent-controlled apartments (cost: pay this lady Sue’s $2,000 rent); a get-out-of work-early pass (just pick up Kristin of Mill Valley’s kids from school); and a sweet spot in Dolores Park (cost: 1 PBR to the dude who’s about to pack up). — Chloe Harris Hennen  //  welldeserved.me

Among the most beautiful and scenic (Karl-willing) of all international icons, the Golden Gate’s many vantage points, sunset opportunities, and overall splendor make it a wholly acceptable backdrop for a selfie—whether you’re a first-time visitor or lifelong devotee to the International Orange. — Marina Smith  //  goldengatebridge.org.

Stanford University is now home to a prized assemblage of 20th Century American art thanks to generous Palo Alto collectors Harry and Mary Margaret Anderson and their daughter, Mary Patricia Anderson Pence. Doing the only thing a grateful beneficiary could do in the face of such an important endowment, which includes works by such blue chip artists as Jackson Pollock, Wayne Thiebaud, and Ellsworth Kelly, Stanford constructed a special building—part of the campus' growing arts district—exclusively for the Anderson Collection. Go check it out. —L.M.L.  //  Stanford University, 314 Lomita Drive,(Palo Alto), anderson.stanford.edu

Take three real estate agents—a hipster-bearded business guy, a suave Pac Heights cutie, and a bitchy gay out for total domination—have them compete for the best listings in San Francisco, and make sure a camera crew is filming the whole time. What do you get? That's right, Bravo's Million Dollar Listing is coming to San Francisco, and we can't wait to watch every disasterous moment. —Damion Matthews  //  bravotv.com

These days, it's rare to see someone reading an actual book on BART during commuter hours. But, when the glow of your iPhone or Kindle gets to be just a little too much, nothing can beat the smell and touch of real paper-bound books. Step back in time at 871 Fine Arts, an art gallery and bookstore specializing in books on contemporary art as well as new and out-of-print novels. In business since 1986, stop by this summer for one of their scheduled literary readings and art exhibits—the complete collection of Hairy Who Publications on view now—or to persue the selection of prints, paintings, drawings and sculpture for sale among the hardbacks. — S.M.  //  20 Hawthorne St (SoMa), artbook.com/871store

Movie That Stole Our Hearts: Batkid

You might remember Miles Scott, the five-year-old former leukemia patient who captured San Francisco's heart with a wish to be Batman for just one day. Well, now he's getting the Hollywood treatment. His triumphant story has been made into a tear-jerking documentary, Batkid Begins, which debuted at Sundance last year. Relive Batkid's Gotham City adventures for yourself: the film hit theaters on June 26. — S.M.  //  batkidbegins.com

Phoenix from the Ashes: Strand Theater

After languishing in intermission for years, the nearly century-old Strand Theatre in downtown San Francisco is poised to re-enter the spotlight. A.C.T. purchased the former movie house—which had become an adult cinema before shuttering back in 2012—with a vision of adding a second, smaller venue they could use both for their MFA program productions and to stage edgier new works. After a $34.4 million renovation that includes a bright coat of red paint, the 283-seat main theater debuted with its first public performances, Love and Information, on June 3. — S.M.  //  1125 Market Street (Mid-Market), act-sf.org

You've never experienced the symphony quite like this. Stroll through a nightclub setting while sipping on handcrafted cocktails at the SF Symphony’s SoundBox, an after-hours harmonic experiment in which classical masterpieces are set to a backdrop of abstract imagery by video artist Adam Larsen. — Leilani Marie Labong  //  300 Franklin St. (Civic Center), sfsoundbox.com

Busta Rhymes, Guys and Dolls, Nirvana, and the Founding Fathers of the United States of America have one man in common: rapper Daveed Diggs. The Oakland-based star stunned New York audiences earlier this year with his incendiary Public Theater performance as both the Marquis de Lafayette and Thomas Jefferson in Hamilton, the critically adored hip-hop historical smash that tells the story of Alexander Hamilton, George Washington's chief staff aide. Now, the show moves to Broadway and begins previews on July 13 at the Richard Rodgers Theatre, the same venue that premiered Guys and Dolls, Chicago, and countless musical-theater classics before it. Not bad for a rapper from the Town. — S.M.  //  hamiltonbroadway.com

A few things you won't find on San Francisco-based photographer Troy Holden's Instagram account: food, "effortless style" shots of fashionistas, latte foam art, feet on the beach, or a gratuitous abuse of saturation. What you will find are choice images, usually shot in black and white, documenting the city through his eyes. From local color and Market Street kerfuffles to fellow Muni passengers and this glorious #BeatLA shot, Holden's vision and narrative of the city are deceptively clear and concise without ever taking a fatal turn toward the cliche. —B.K.  //  instagram.com/troyholden

Since their EP release last September, the SF-based electro-pop duo comprised of Johnny Hwin, 29, and Brodie Jenkins, 27, has been traveling the festival circuit. Their performance of their debut jam, “Harlem,” at last summer’s Treasure Island Music Festival, is still stuck in our heads; the duo also gave kickass performances at Austin's SXSW and Noispop this year. Look out for a new album on the horizon.  —S.M.  //  wearecathedrals.bandcamp.com

The founders of Trick Dog and Flour + Water have conspired to reimagine one of the city’s most iconic music venues, resulting in a gift for the soul of San Francisco. The venue itself is a huge coup for cultural protectionists and the local music scene, but Cafe du Nord’s renaissance doubles as a win for nocturnal foodies. The gastronomically forward music hall will serve food until 2am most nights, a welcomed last call time in an otherwise early-to-bed gastro scene. —Chris Trenchard  //  2174 Market St. (Duboce Triangle), cafedunord.com.

While many bemoan the massacre of gay nightlife in SF (LGBT spots are shuttering to become hetero-littered craft beer lounges for topknot-sporting bro trash), legendary drag icon Heklina is doing something about it. Enter Oasis, her gay-tinged sanctuary in the heart of SoMa. In addition to choice DJs and a spacious dance floor, Oasis has a massive stage for nightly drag shows drawing on local and national talent. (Anyone who's appeared on RuPaul's Drag Race makes a pitstop here, if they're lucky.) Unlike other drag cabaret joints in town, the crowd at Oasis shuns the gaggles of bachelorette partyers who've come to gawk at the gays in their natural habitat. —Brock Keeling  //  298 11th Street (SoMa), sfoasis.com.

The Fillmore, or as we like to call it, the “inspiration for our Grand Foyer when I’m filthy rich,” remains hallowed ground to every San Franciscan who yearns for hyper-relevant live music with a touch of historical gravity. The long-celebrated venue still prides itself on varied, sophisticated curation—in 2015 alone, the Fillmore welcomed an absurdly wide spectrum of accomplished artists, from the electro nirvana of Caribou to the alt-American genius of Jeff Tweedy to the dance-pop of Sylvan Esso to the instrumental wonder of Budos Band and beyond. If they're relevant, they've played the Fillmore. —C.T.  //  1805 Geary Blvd. (Western Addition), thefillmore.com.

Ever come across a public art installation outdoors in SF? Sure you have, and very likely it was Cheryl Haines who put it there. For starters, there's the “spire” among the trees at the Presidio from sculptor Andy Goldsworthy; then there were the impressive works of more than 16 artists, including Bill Fontana and Cornelia Parker, to commemorate Golden Gate Park’s 75th anniversary; and, oh yeah, the blockbuster show “@Large: Ai Weiwei on Alcatraz,” an installation by political dissident and international multimedia art superstar Ai Weiwei on the Rock— all three done under the umbrella of the FOR-SITE Foundation. All in a year's work for this art world superstar. What till you see what she's working on next. —Cheryl Locke  // 49 Geary Street, Suite 205 (Union Square), for-site.org

San Francisco non-profit Gray Area (also known as GAFFTA) has almost single-handedly validated an emerging form of art called creative coding over the past decade. Creative coding is about programming expressive, rather than functional, work—think everything from interactive maps of Tenderloin data on crime to designing the parklet. After being priced out of the TL (ironic, right?), GAFFTA has moved into the heart of the Mission with new digs in the old Grand Theater space. The new Gray Area’s Art & Technology Theater hopes to be the Bay Area's newest stage for imagination and exploration, where multimedia artists can come together to showcase their work for the community. —S.M.  //  2665 Mission St (Mission), grayarea.org

In the wake of an impossibly complicated housing crisis and ever-rising rents, the future of the San Francisco music venues hangs in the balance. Recognizing the cultural value of institutions such as The Independent, Bottom of the Hill and other venues facing ugly encounters with neighbors and landlords, city supervisor London Breed pushed legislation through local government this spring to afford music venues special privileges and allowances. Way to go, London. — C.T.

As the oldest professional ballet company in America, the San Francisco Ballet exhibits a grace and elegance that just can't be beat. This season, SF Ballet celebrates Helgi Tomasson’s 30th anniversary as artistic director with three of his greatest story ballets, as well as the return of Shostakovich Trilogy; iconic works by Balanchine and Robbins; two world premieres; and more tutus than you ever dreamed of. —Isabel Moniz  //  sfballet.org.

Power cords and dead batteries may become a thing of the past. That is, if San Jose-based Energous has anything to say about it. The energy start-up has cut the cord on portable electronics with its revolutionary over-the-air WattUp charging system. The safe, clean power of their wireless charging zones are akin to a Wi-Fi hotspot, a feat David Pogue calls, “the future of technology.” — James Vest   //  energous.com

Say what you will about the CEO, or the recent case ruling, Uber still offers the ultimate convenience for the urban wanderer: no credit card or cash transactions and no need to whistle or wave down the elusive cabbie. Despite the city’s walkable nature, after a night out in the Mission, it’s usually too much to even think about the trek back to your SoMa crash pad. — Marina Smith  //  uber.com