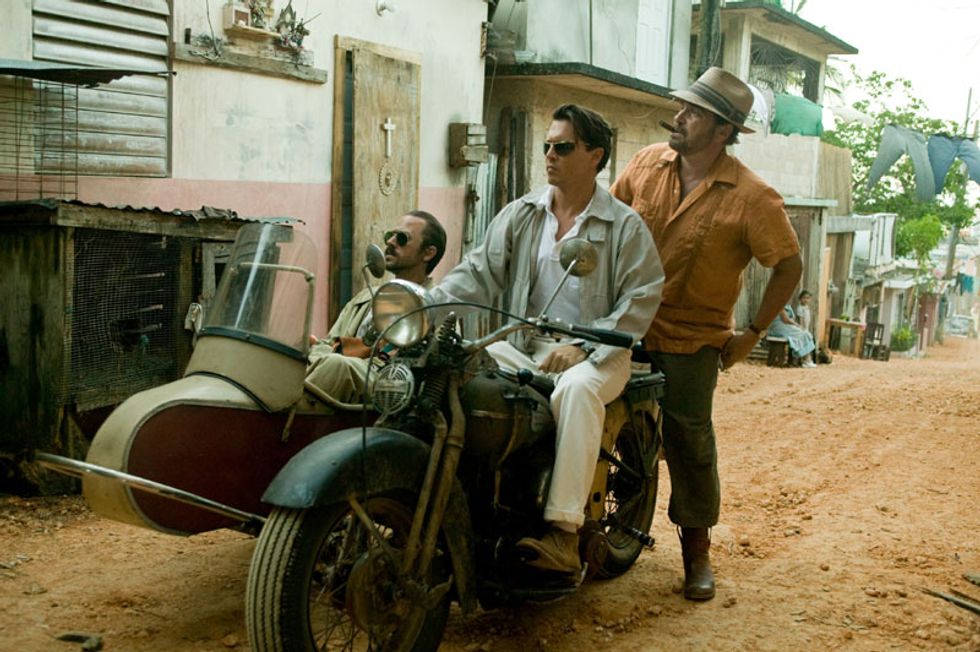 Both for his skillful portrayals of life on the lunatic fringe, and his capacity for playing dual roles on the screen – at once the architect of his own delirious demise and a bemused spectator to it – Johnny Depp has become Hollywood’s designated stand-in for the late Hunter S. Thompson, and rightly so.

Thompson, whose hedonistic exuberance and wry self-awareness inform the hard-living alter egos that people his fiction, returns, at least in spirit, in The Rum Diary, Bruce Robinson’s cheerfully meandering adaptation of the author’s second novel.

As in Terry Gilliam’s ambitious but grating Fear and Loathing in Las Vegas (1998), Depp serves as narrator and hero, an irreverent biographer of noble burnouts, restless beauties and money-hungry swine. A friend of Thompson’s who kept Diary alive through a decade-long series of false starts, the actor, still impossibly fresh-faced at 48, knows how to speak the man’s language, in a way that makes even Thompson’s most indulgent asides seem like poetry.

Here, he plays Paul Kemp, a New York journalist whose impulsive, possibly desperate move to Puerto Rico thrusts him into the thick of an on-again, off-again love story rife with jealousy, violence and betrayal.

For all his revolutionary zeal and vague ambitions to out crooked capitalists and the politicians complicit in their crimes – once again, Thompson, abetted by Robinson’s faithful screenplay, targets favorite whipping boy Richard Nixon – Paul is a more passive protagonist than Fear and Loathing’s Raoul Duke. Life happens to the besotted scribe between drinks, of which there are many. He is content to observe, moved to react only when bodily harm seems imminent.

Paul is rankled by the injustices of the world, and resolves to expose them as the newest contributor to the San Juan Star, a perfunctory publication wearily edited by the soulless Lotterman (Richard Jenkins). A corporate lackey in a cheap toupee, Lotterman has no time for Paul’s populist sympathies – tourists don’t flee the mainland for wordy indictments of the American Dream, he reasons. They come to drink the rum, soak up the sun and read puff pieces about lottery winners.

When he’s not giving himself over to the island’s most irresistible temptations – the cocktails, and the beautiful blonde Chenault (Amber Heard) he lusts after but never really pursues – Paul doesn’t write very much. His misadventures are the stuff of legend, though. How else to explain a frenetic odyssey that lands him and his debauched sidekick Sala (Michael Rispoli) in jail, charged with setting a cop on fire?

This being a tropical paradise where the locals take keen pleasure in torturing rowdy interlopers, there’s no get-out-of-jail-free card at their disposal. Rather, they must rely on the charity of “freelance P.R. consultant” Sanderson (Aaron Eckhart), a manipulative puppet-master attempting to turn some of the region’s most beautiful scenery, still unmolested by greedy developers, into a chain of beachside resorts.

It’s just the sort of thing that turns Paul’s stomach, but he accepts Sanderson’s help – with strings attached – because the money is good and he’s got bar bills to consider. That doesn’t make Paul a patsy. Rather than using his media pedestal to get the public behind the development, he uses whatever insider dirt he gleans to expose Sanderson and his partners for the bastards they are.

Along the way, Paul enjoys frustratingly brief flirtations with Chenault, who happens to be Sanderson’s trophy girlfriend, and the cockfights favored by local gamblers, Sala included. But to what end? Will Paul show up Lotterman by restoring some semblance of integrity to the Star? Will he sabotage Sanderson’s get-rich-quick scheme? Will the fighting roosters pave his and Sala’s road to minor riches?

None of the above. Paul gets the girl, or so we’re told in the movie’s epilogue, but even that victory, however significant, is left off-screen. If Seinfeld was hailed as an aimless, ongoing narrative about nothing in particular, Diary is its cinematic cousin. It succeeds in creating a mood, through a series of fitfully funny episodes that unfold at their own languid pace, and doesn’t aspire to much more.

Like another intoxicating tale of excess Robinson wrote and directed, 1987’s Withnail & I, it treats us to the outrageous highs and humiliating lows of a booze-addled journey to self-discovery. The movie, perhaps, is an apt metaphor for alcohol itself, providing a fleeting rush, and an almost hallucinatory diversion, but nothing that lasts until morning.

That sounds like faint praise, I’m sure, but give Robinson and Depp credit: they spare us the aftertaste and the hangover.

The Rum Diary opens tonight at the AMC Metreon, the AMC Van Ness and the Century 20 in Daly City. For tickets and showtimes, click here.