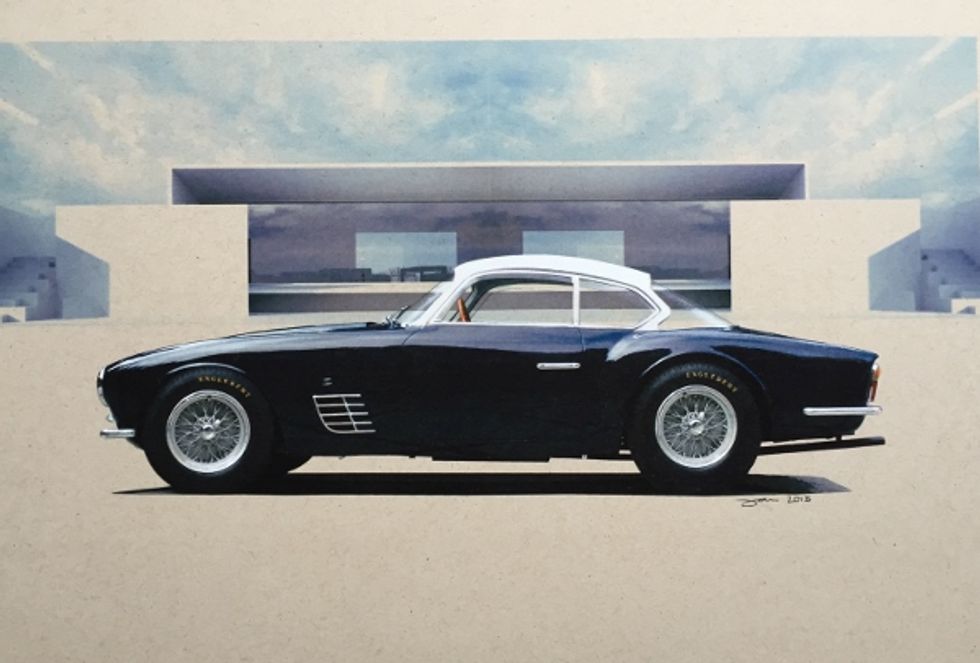 Inside its new San Francisco menswear shop, international lifestyle brand Club Monaco is keeping the vibe local with a mix of art from California painters.

Located inside Westfield San Francisco Centre, the Club Monaco Men's Shop, opening Aug.15, is taking on a techie, masculine vibe with art that speaks to many dudes' first love: cars.

We're obsessed with Los Angeles artist Jan Matthias' photographs, including one of a 1953 Jaguar C-Type: A famous British racing car, it is one of only three of its kind to have ever been made. Coincidentally, the hot rod will hit the auction block at RM Sotheby’s in Monterey this Thursday, Aug.13. It is expected to fetch a price tag of $9 to $12 million.

Originally from Germany, Matthias himself is a car designer who moved to L.A. to study industrial design at the Art Center College of Design. Besides his extensive design work for BMW and Porsche, Matthias photographs classic cars and produces enhanced prints via digital and hand work.

In addition to the two pieces from Matthias, the shop is also hung with the 1970s abstract paintings of Oakland artist Louis Siegriest. A true local, he studied at the California School of Arts and Crafts and at the California School of Fine Art in SF; taught at the SF Student’s League in the early 1900s; and passed away in Oakland in 1989. Part of a painting group called the Society of Six, Siegriest was partial to the palette of the French Fauvists and exhibited frequently in Oakland through the 1920s. Softer and more dreamy, Siegriest's work hangs in pleasant contrast to the sleeker Matthias pieces.

Check out the art as well as the mens fashion at Club Monaco Men's Shop, opening Aug.15.

Jan Matthias' C-Type, gouche and color pencil on photograph. This car, one of only three of its kind, goes up for auction in Monterey on Aug.14.