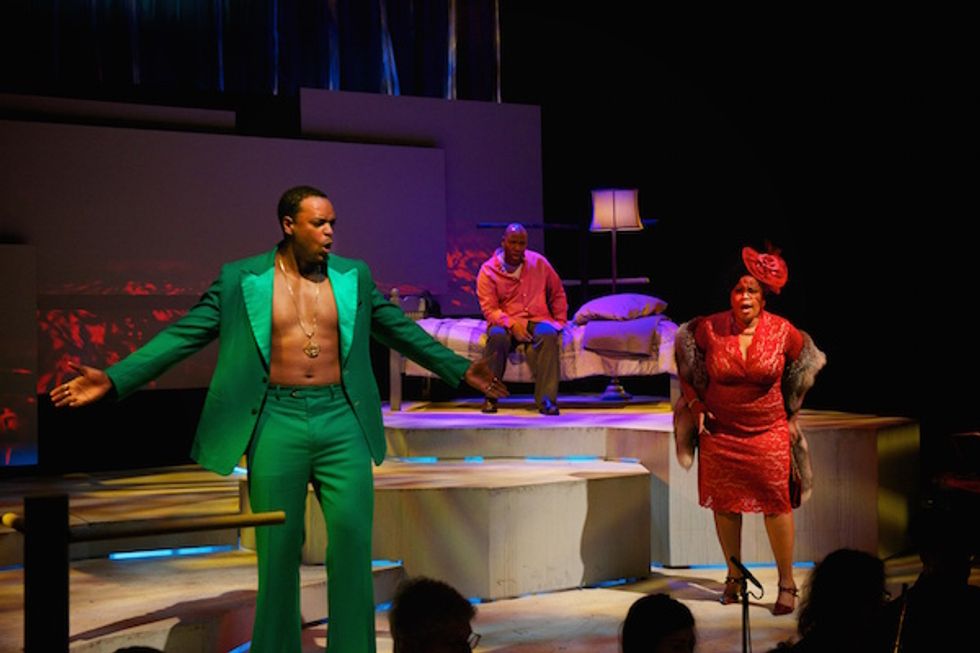 If a hunky black baritone—shirtless and stalking the stage in a shiny green bell-bottomed suit with big lapels and sparkly platform shoes is not your idea of a night at the opera—we get it. It wasn’t ours either. But that’s exactly what happens at the beginning of the second act of Champion, now playing at SFJAZZ.

Known for programming that ranges across the jazz landscape—from last year’s riveting Joni Mitchell tribute and multiple appearances featuring the lithe and fierce Grammy-winning bassist Esperanza Spalding, to an upcoming acoustic concert from two of Brazil’s most graceful and hypnotic musicians, Caetano Veloso and Gilberto Gil—SFJAZZ continues to leave a mark on the cultural landscape of San Francisco in general, and definitely on Hayes Valley in particular.

This past Friday night, we started out a few blocks away at Cala, for drinks and small plates. While I had eaten at Chef/owner Gabriela Camara’s Contramar in Mexico City, this was my first opportunity to try her new SF venture. Tucked in at the communal table, we wound our way through some gorgeous Avinyo Cava Reserva Rosada, which it turns out, is a perfect complement to an array of ceviche, trout tostadas, quesadillas, and sopes playeros. After all, opera is a demanding mistress and we aimed to be up to the task.

The crowd for Champion’s sold-out opening night was varied and brimming with the kind of glamour that seems miles away from the sedate look and feel of the more traditional symphony, opera and ballet programming happening nearby. While making our way through the lobby, we were immediately taken by the striking and slim silhouette of a woman with her back to us, using her long and expressive extended arms the color of café au lait to make a point. With springy blonde hair no more than half an inch in length, when she turned around to make her way up the stairs, she seemed aloof and self-contained; the first words that came into my head were Lupita Nyong’o.

A recent piece in Nate Silver’s FiveThirtyEight makes the somewhat sad point that four works in almost constant rotation dominate opera today. Year in and year out, companies looking to keep box offices percolating by satisfying the desires of confirmed opera fanatics present Aida, La Bohème, Carmen and La Traviata, again and again (three of these four will show during the San Francisco Opera's 2016-17 season). And while these staples can be guaranteed when well done to electrify an audience, they don’t seem to have done much to whet the appetite for new and contemporary stories of heartbreak and betrayal. Or for that matter, encourage new composers to write the kinds of soul-tearing epiphanies that compel heartbroken heroines to behave in a rash manner and do things like throw themselves into the throes of a snowy avalanche as in Catalani’s relatively seldom performed La Wally.

Champion—produced by SFJAZZ in conjunction with SF’s groundbreaking and ever original Opera Parallèle with a score from trumpeter and composer Terence Blanchard—tells the tragic (and true) story of Emile Griffith, who went from teenager with dreams of becoming a hat maker in St. Thomas to U.S. welterweight champion of the world. In 1962, enraged after being taunted by his opponent Benny Paret at their pre-match weigh-in over Griffith’s reputation as an out and about homo (or maricón, as Paret calls him multiple times in Champion), Griffith knocks him out so violently that he never recovers consciousness and dies in the hospital 10 days later. Champion skitters between Griffith’s boyhood, his later days of regret and dementia, as well as his ’70s prime as disco daddy/lothario enjoying the attention of both sexes (hence the eye-popping green suit!).

If all that seems an unlikely journey, well that is something opera and boxing both seem to specialize in—see how Martin Scorsese paired the two in Raging Bull—and heading home after, I couldn’t help but contemplate how rage can motivate and scar a life.