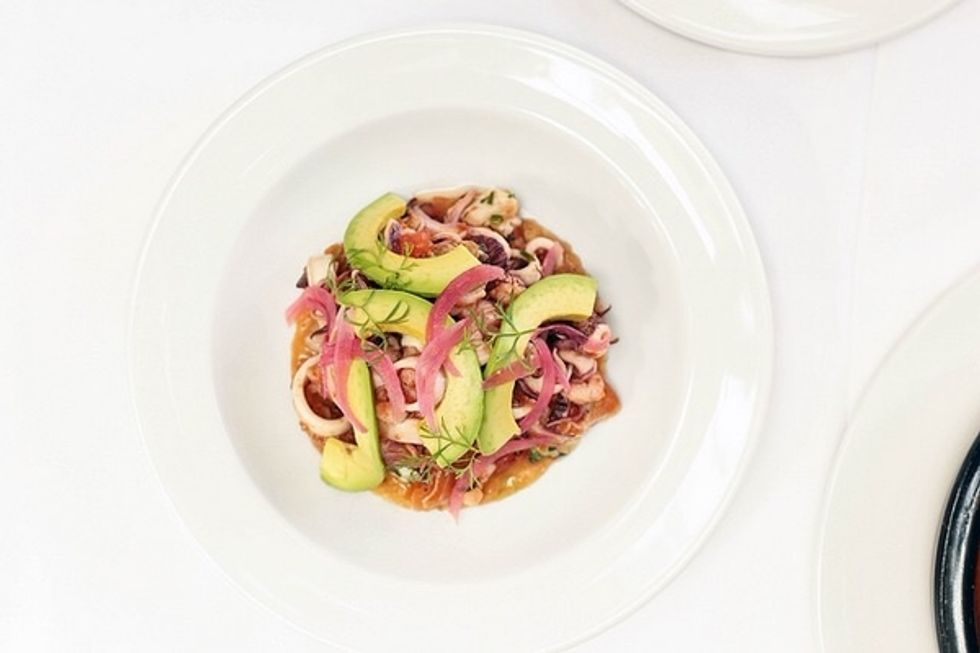 Gabriela Cámara is kind of a big deal in the food world. The chef and restaurateur owns four restaurants in Mexico, including her 17-year-old famed seafood-centric flagship, Contramar. She’s chummy with Diana Kennedy, and has been featured in Food & Wine and Bon Appetit.

So when Cámara came to San Francisco to open Cala, her first stateside restaurant now open in Civic Center, the food world got giddy. It certainly excited Chad Robertson of Tartine, who, after meeting Camara, went out on a limb: Tartine, which doesn’t provide custom-baked-anything for just anyone, is baking bolillos (a sort of Mexican baguette) just for Cala.

Located next to the Rickshaw Stop and around the corner from the symphony and opera halls as well as SFJAZZ, Cala is a beautiful, modern space ideal for a pre-show dinner. Skylights, leafy greens of the indoor plant variety, and a black and white palette feel transporting—the restaurant doesn't feel like San Francisco; somehow, Cala feels as though it could be anywhere in the world...and we love that about her.

On the food front, Cámara brings her seafood-first sensibility along with her Contramar classics like trout tostadas and rock cod a la talla. The former features thin slices of soy-marinated trout, sourced from McFarland Springs, over a spread of chipotle mayo on a housemade tostada dotted with dabs of avocado puree and threads of fried leeks. Each tostada is a two-biter, with four tostadas per plate—they're great for sharing, but you’ll want them to yourself. The rock cod is definitely intended for two: Butterflied and grilled over a woodburning oven before being brushed with salsa verde, the perfectly grilled fish is beautiful on its own, but also makes a hell of a taco.

Missionites with sopes daily at their fingertips might skip this specialty and save room for the menu's raw options, including sea bass ceviche verde or tostada campechana—an admittedly pricey tostada that’s plentifully topped with what seems like a pound of marinated sea creatures.

The unexpected star of the menu goes to the sweet potato, which Camara cooks directly on embers ala Mallmann. The outside is thoughtfully burned black and crisp; the inside remains soft and sweet. It’s placed on a plate along with a quenelle of salsa negra (made from bone marrow) and is undoubtedly the most badass sweet potato you’ll ever eat.

Camara adds meat to the menu at brunch (where you’ll taste the best carnitas torta made with Robertson's bolillo) and at the new Tacos Cala, the pop-up in the back alley that serves a daily array of guisados (stews). Drinks are mezcal-forward, strong, and delicious. Try the horchata colada—it tastes like a boozy Christmas in a cup...perfect for liquid dessert.