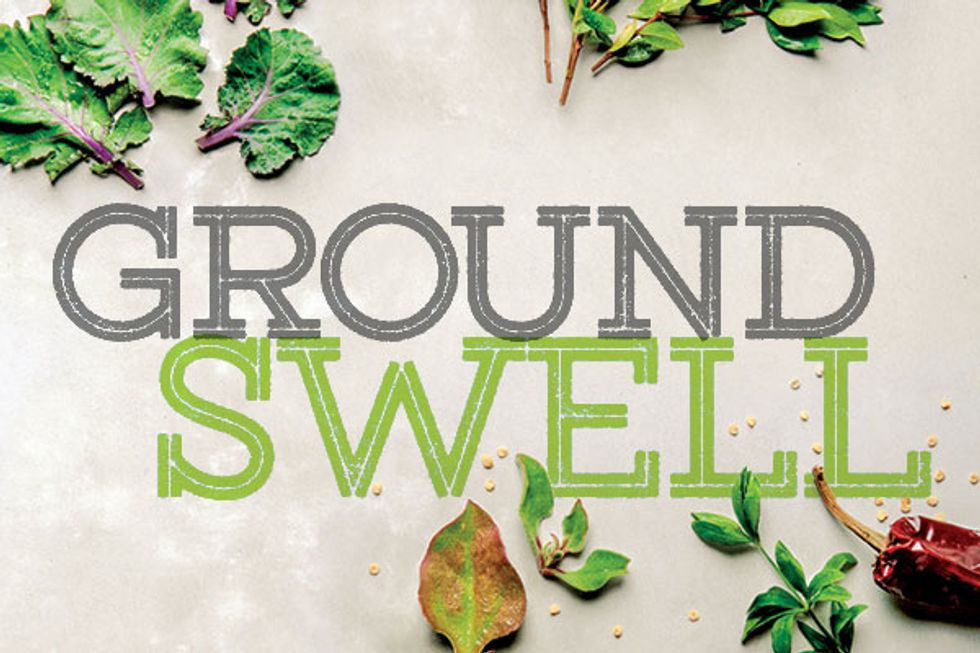 The greatness of Northern California dining, any local will tell you, starts with the top-notch ingredients grown here. But creative Bay Area chefs and farmers aren’t always satisfied with the standard bounty: They’re scouring the globe for a slew of exotic varietals to add to the regional mix. This new bumper crop of fruits, herbs, and vegetables is cool, kooky (lollipop kale, anyone?), and—in the right hands—refreshingly delicious. Meet the new “locals.”

Five years ago, chefs Matt McNamara and Teague Moriarty (Sons & Daughters, The Square, and Sweet Woodruff) and his team planted a garden at his mom’s Los Gatos property, “with the intention of growing things that you cannot purchase,” he says. Sweet woodruff, a stemmy, flowering ground cover native to North Africa and Western Asia, was one of the first ingredients they set out to grow.

After much testing fraught with failure, McNamara’s crew learned the trick to preserving sweet woodruff’s subtle vanilla-meets-fresh-hay flavor during cooking: dehydration. It worked to flavor a whipped cream for banana cream pie as well as their signature meringues. “At the end of this process, I said we have to name our restaurant after it, because it represented an interesting battle for us.” Look for it in cocktails, too, at The Square in North Beach.

Imagine if cultish kale and beloved Brussels sprouts had a baby. When John Moore, of Salad Savoy farm, heard about this hybrid being grown in Britain, he put seeds into production and changed the name from flower sprouts to Lollipops™ (aka lollipop kale sprouts).

“The flavor profile is just like you would imagine,” says 1760 chef Adam Tortosa. “It’s mild-tasting and has pleasant kale-like flavors with the bite of Brussels sprouts.” He sautés them with guanciale (a cured Italian pork cheek) in grapeseed oil, lemon, and soy sauce, explaining, “If you’re going to have a special vegetable on the menu, you want to show it off by making it the center of the plate.”

The Dish: Baccala with artichoke mustard, radishes, and ice lettuce

That colorful, spiny succulent known as ice plant that drapes our coastline? There’s an edible version. “I hadn’t seen ice lettuce on a menu since I was in Europe about 10 years ago,” says SPQR chef Matt Accarrino. “I could find a few greenhouse versions in California, but field-grown ones store more salt to help hold in water. They end up tasting more intensely salty and sour, which I prefer.”

Accarrino grows his own crop at Jacobsen Orchards, which he uses at SPQR to add seasoning, acid, crunch, and visual interest to dishes such as summer crudo and their spin on baccala, a salt cod-based dish that he subs in with halibut and other fresh white fish. “The artichokes and mustard have some earthiness and spiciness. Then the ice lettuce comes in with salinity and texture.”

Long cultivated in the Basque town of Espelette (by way of Mexico), this moderately spiced pepper has typically been imported as a powder. But Rich Table chef Evan Rich probably wouldn’t be using it if it were available only from France or Spain. “It’s an exotic, special pepper with a lot of complexity,” he says, “but I like to use as many local ingredients as possible.”

Luckily for him, farmer friend Annabelle Lenderink brought back seeds four years ago, but she keeps to tradition by stringing and drying hers. “They take on even more of the terroir of the farm by drying out right there,” Rich says, who steeps them for up to four days in Champagne vinegar to add spice to chitarra pasta.

Camino chef Russell Moore is used to farmers gifting him with oddball ingredients. “One day, a big bunch of myrtle branches came my way,” he says, adding that he’d never tasted the evergreen shrub but had heard of them being used to infuse a Sardinian digestivo called mirto. With a piney, medicinal aroma, the leaves can prove tricky for amateur chefs. “Like any new ingredient, you’ve got to work in the kitchen trying to figure out what to do with them.” His favorite use is with dairy, from ice cream to pudding to milk-braised pork. “The dairy both distills the flavor and tempers some of its resinous, piney qualities.” He now bakes it with sheep’s milk ricotta, serving it as a bar snack with toast and a plethora of leafy herbs.