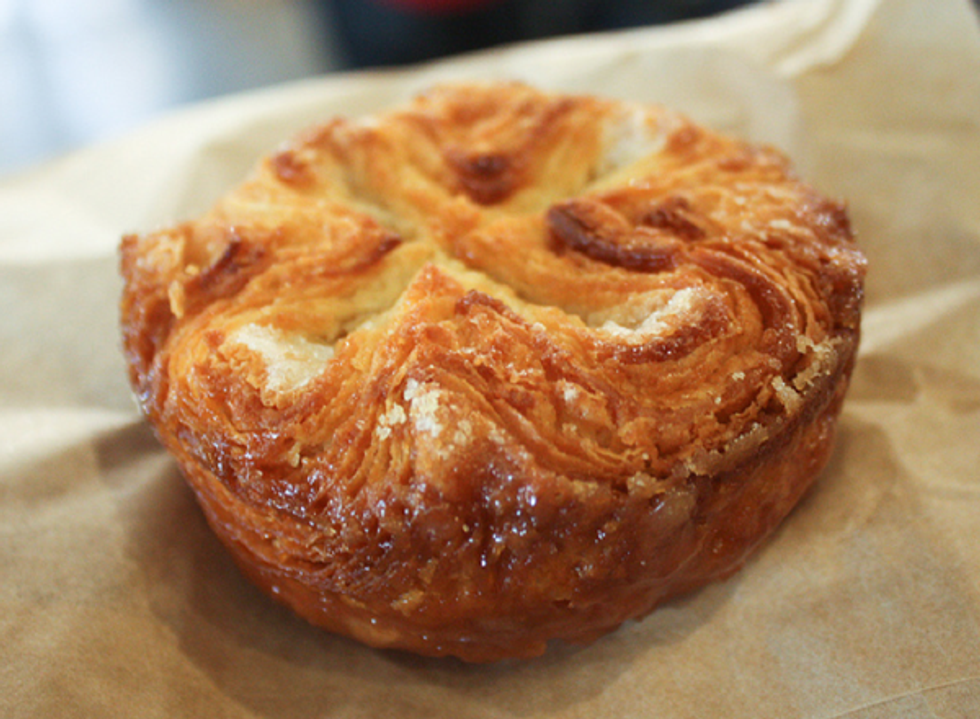 Almost every Sunday someone approaches the Starter Bakery stand at the Temescal Farmers' Market, frantically scanning the selection of baked goods for something, something they can't quite identify. Brian Wood knows what it is. His kouign-amann launched Starter into existence about a year ago, and its popularity spread so quickly through the East Bay (where the bakery is headquartered) that people started seeking out the pastry with the name they couldn't pronounce, solely based on the buzz on the street. [For the record, the first word "kouign" is pronounced "queen," and the second part, "amann," is prounced like the capital of Jordan, Amman.]

Now San Franciscans can find the rare treat at several cafes around town, and Wood has had to put a hold on new accounts because his little bakery can't keep up with the demand. So what the heck is kouign-amann, you ask? Let's start by saying your morning croissant is about to get upstaged in the pastry case.

Originally from Brittany, France, kouign-amann is made using a similar method to its more widely known French cousin, the croissant. But, salted butter is used instead of unsalted, an added layer of sugar is folded in with each layer of butter, and the whole creation is baked on a pan that's brushed with butter and sugar. By the time the the three-inch disk grows to its full inch and a half height, its caramelized crispy exterior belies a light, airy middle. Sugar and salt wrestle temptingly for center stage with each bite.

Adding to the intrigue, the perfect kouign-amann is trickier to achieve than the textbook croissant. Wood says the sugar can easily liquefy during the baking process, causing the entire pastry to turn into a pile of goop. After a stint training with world-renowned pastry chef Pierre Herme in Paris, Wood was set on figuring out a way to recreate kouign-amann in the Bay Area.

Now you can find a version filled with TCHO chocolate and seasonal fruit-variations at Starter Bakery's farmers market stalls. As of two weeks ago, the original plain version is available daily at Bi-Rite Market. You can also find it at farm:table and Rapha Cycle Club in the Marina, and atLittle Vine in North Beach on the weekends.  This Wednesday, kouign-amann will be available on the regular in the Financial District when the brand new location of Coffee Bar opens at 101 Montgomery St. And I'm told former Manresa and Gary Danko pastry chef Belinda Leong is now sending a regular supply of kouign-amann to the pastry case at Four Barrel in the Mission. At this rate, that strange new pastry you can't pronounce could become an everyday delicacy.