Design Envy: This Midcentury Home in Marin Is Perfect for Summer Entertaining

They looked at nearly 40 houses before coming across a midcentury gem clad in clear heart redwood. It formed an L shape around a courtyard pool and sat far back on a flag lot, affording plenty of privacy. "It checked all the boxes for life in California that would be diametrically different than life in New York," Krefman says.

To update the home, they removed the "Golden Girls Florida-style shutters," Krefman says, that had previously covered all the large windows. This brought in natural light and views to the pool, now visible from nearly every room. They also built a new deck with a custom retractable shade feature to enjoy the sunny weather, replaced the interior floors, made minor but impactful updates to the kitchen, and filled the rooms with modern classics and vintage furniture pieces. 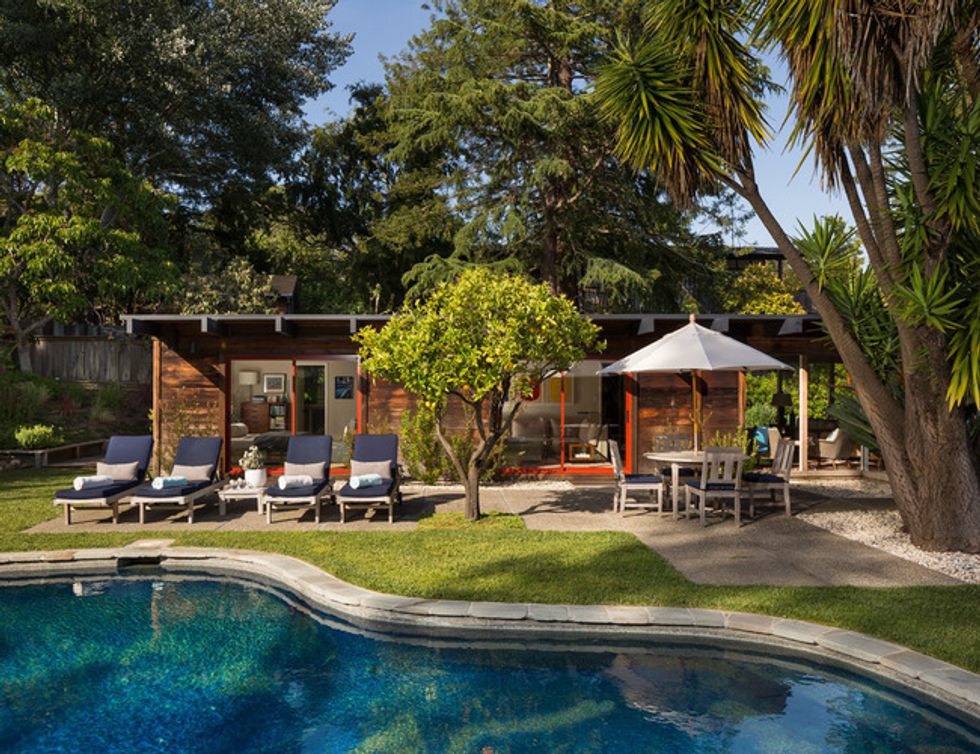 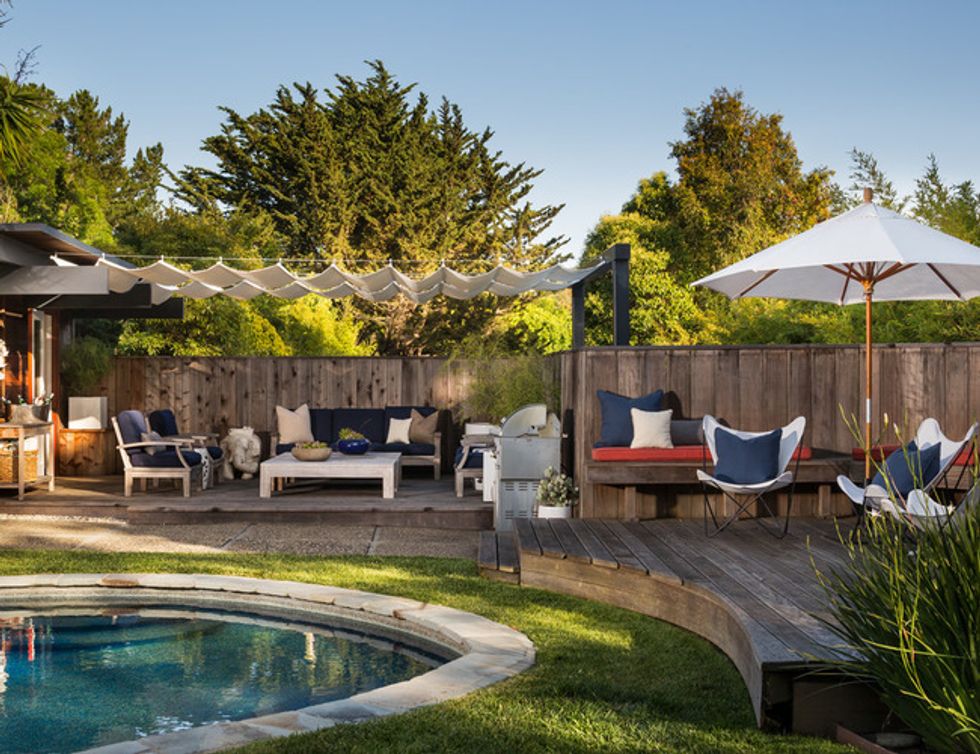 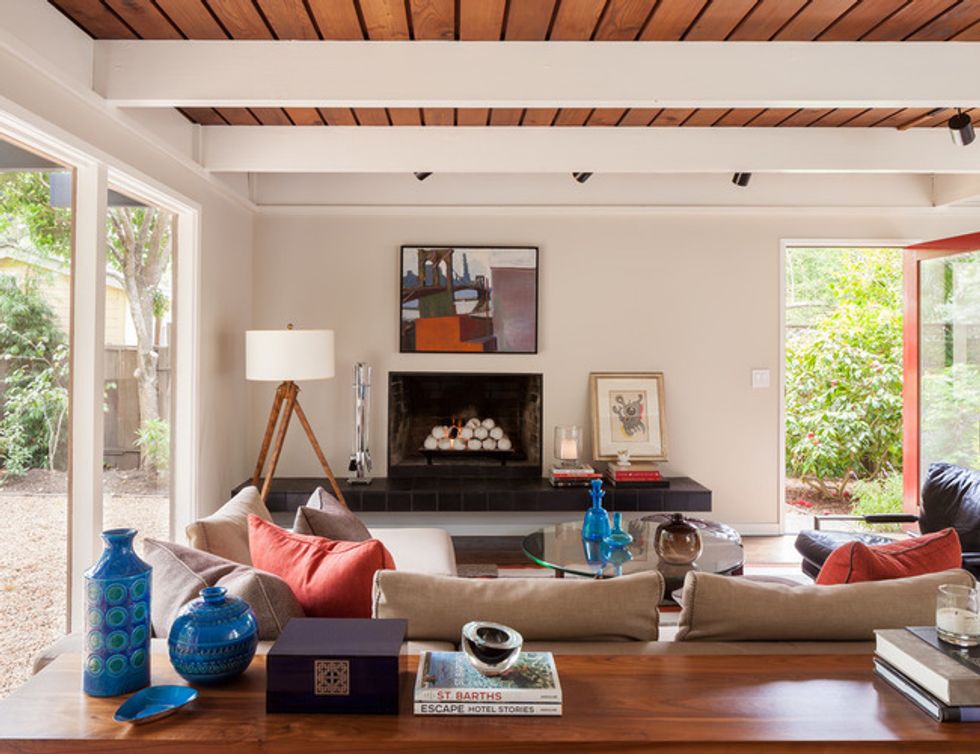 The entry opens to the living room. The ceiling beams were already painted white when the couple moved in, but they chose to keep the original redwood ceiling intact. "There's no way we'd touch that ceiling, not in a million years," Krefman says. "It's clear heart redwood, mostly free and clear of knots. It has an amazing grain pattern. Redwood is now protected in California. To have that in its original state is something to cherish and appreciate."

A painting of the Brooklyn Bridge by artist and friend Lisa Steiner hangs over the fireplace, which the couple converted from wood-burning to gas. A pyramid of concrete balls takes the place of fake logs. 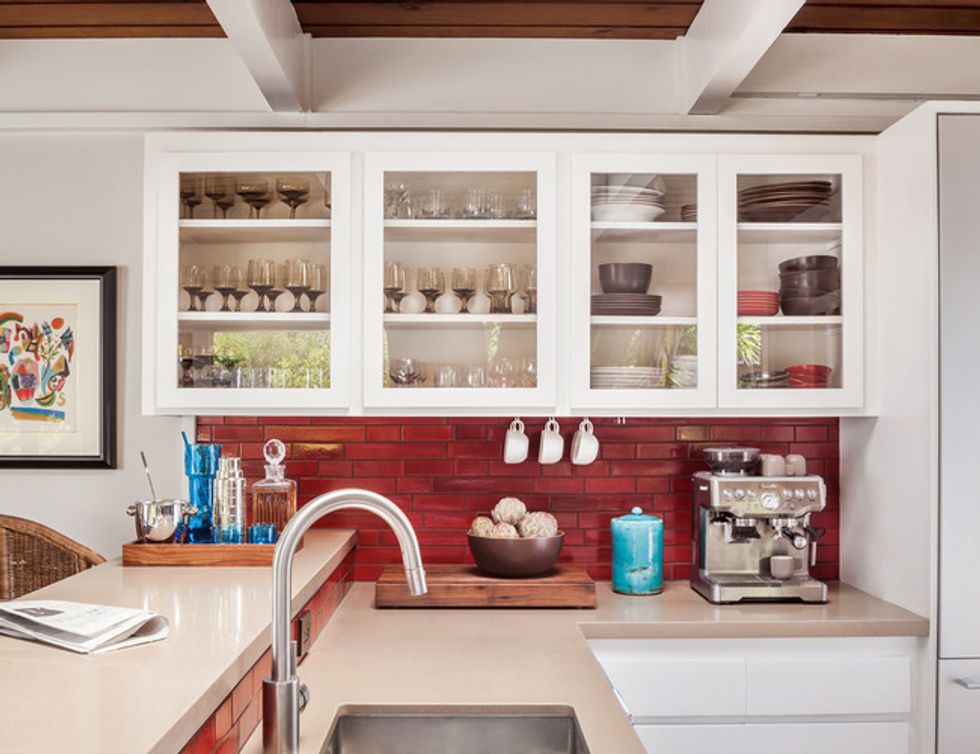 In the kitchen, the couple kept the original cabinets but added a new Caesarstone countertop to replace the original 4-by-4-inch black porcelain tiles with thick grout. The couple bought the red tile from Heath Ceramics' stock of seconds. They were intended for another job but deemed seconds because the glaze is inconsistent, showing a mix of dark and light tones, which the couple liked. The tile came in three sizes: 2-by-4, 2-by-6 and 2-by-8 inches. The couple had their installer dump them out, mix them up and put them up randomly. (Photo courtesy of BK Interior Design) 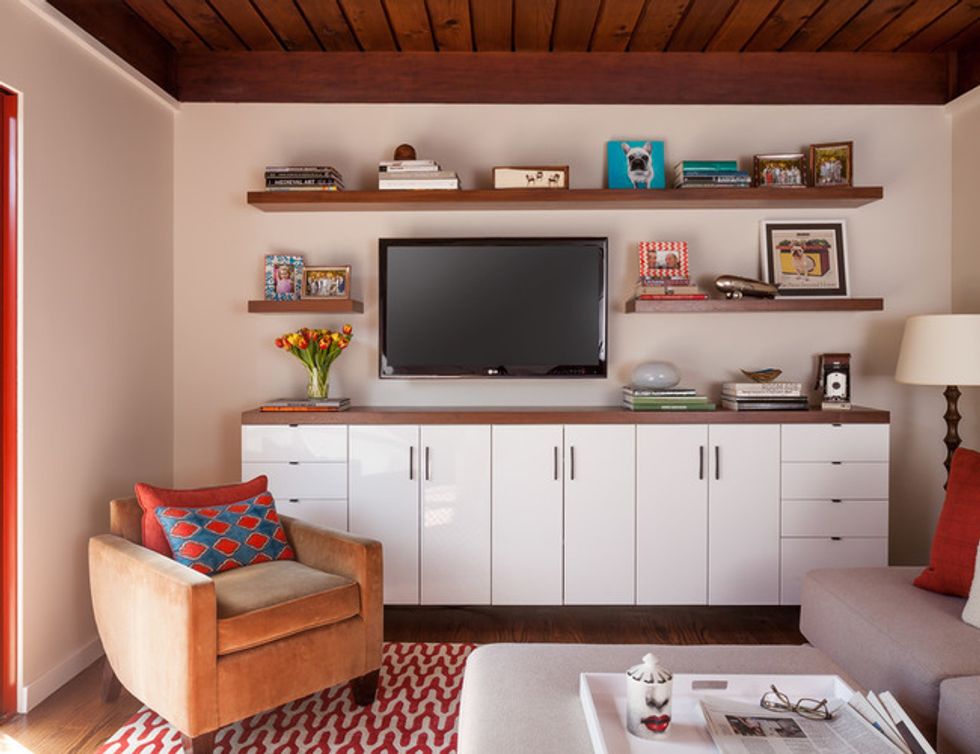 They converted their second bedroom into a TV room. Krefman hung kitchen cabinets from Ikea on the back wall and had them topped with walnut. Walnut shelves float above. The chair is covered in camel-colored corduroy. A vintage Polaroid camera, one of many that McFarland collects, acts as a bookend for novels and volumes on art history, photography, California landscapes and more. (Photo courtesy of BK Interior Design) 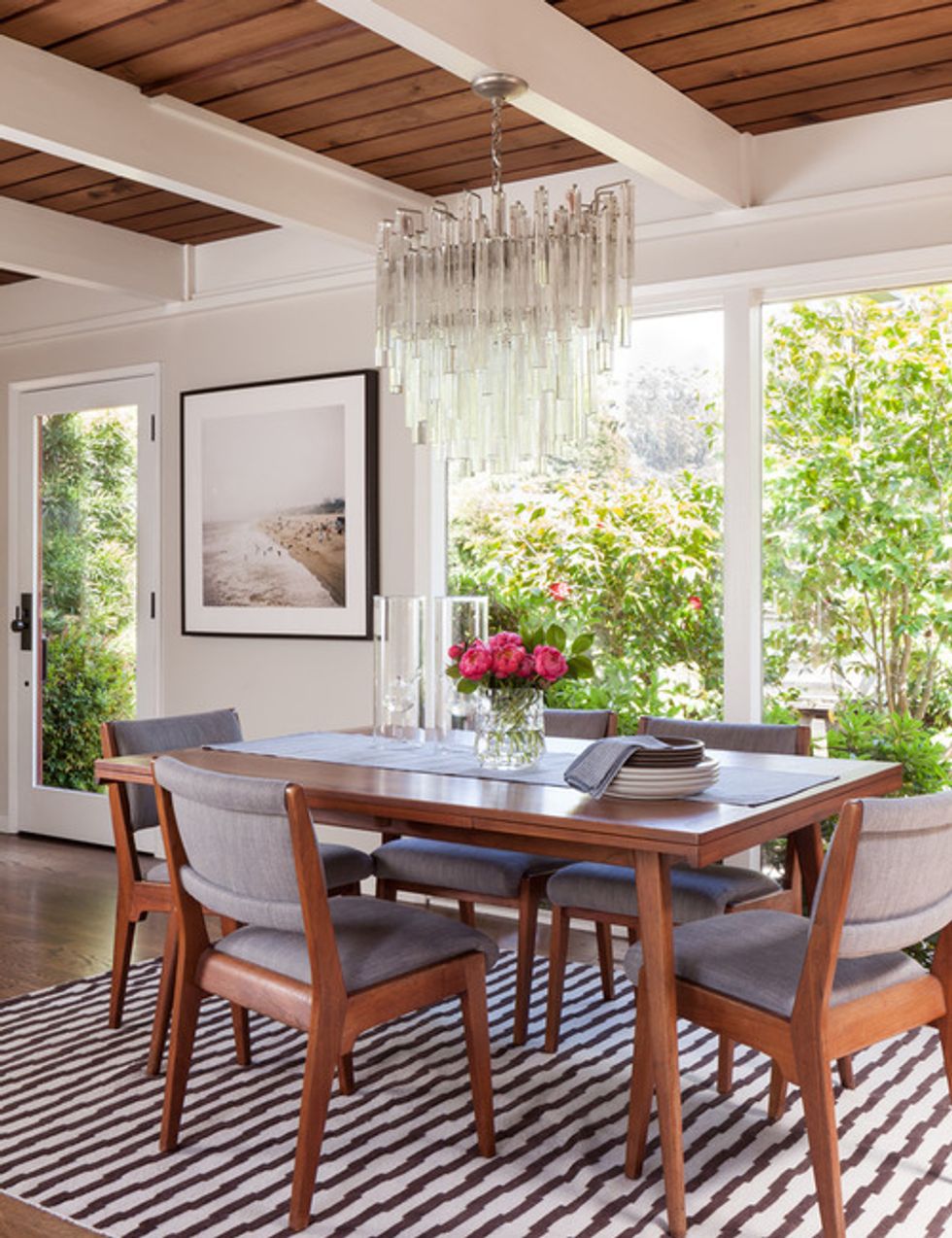 A 1970s Venini chandelier from McFarland's mother hangs over a vintage dining table and chairs, the latter of which are covered in outdoor fabric. "In case anybody spills or our French bulldog rests his drooly face against the chair," Krefman says. He designed the rug himself with Mark Nelson, a rug fabricator in New York. (Photo courtesy of BK Interior Design)

Krefman says one of the best things about the house is the original redwood exterior siding, which the couple chose to leave alone. This view looks across the pool at the L-shaped house. The master bedroom sits on the left, a TV room directly ahead, a living room in the far-right corner, and the kitchen and dining space just out of view to the right of the large tree.

The backyard originally didn't have any lawn, just 4-by-4-foot pavers, many of which were cracked and broken. "It was like a toe-stubbing minefield back there," Krefman says. He and McFarland removed the broken slabs, then repositioned the ones in good shape to create areas for dining and lounging. The rest they covered in lawn. "It's more parklike and usable than before," Krefman says.

The deck to the right is original. The couple added the raised deck in the background to create more of a fluid extended living space off the kitchen.

Removing large pine trees from the property meant a lot more exposure to sunshine, so Krefman designed a custom retractable shade structure that riffed on something he'd seen at the Parker hotel in Palm Springs, California, and on various awnings in Northern California's wine country. The shade fabric slides along steel cables. When Krefman or McFarland want to open one side or the whole thing, they use a kind of cane to reach up and slide the fabric across. Magnets on the end snap the fabric in place when it's fully opened. "I wanted to avoid a giant umbrella pole," Krefman says. "This really freed up floor space and allows us to manage what gets sun and what doesn't."

Krefman says that he and McFarland have an "open-door policy" on the weekends for friends wanting to get away from the San Francisco fog and into the sunshine. Friends stop by to hang out by the pool, and enjoy wine and cheese or cocktails. "We never know who's going to show up," Krefman says. "We stay busy entertaining, for sure."

// This article was originally published on Houzz.

Inspiration to Design the Pool of Your Dreams

How to Get Midcentury Modern Style