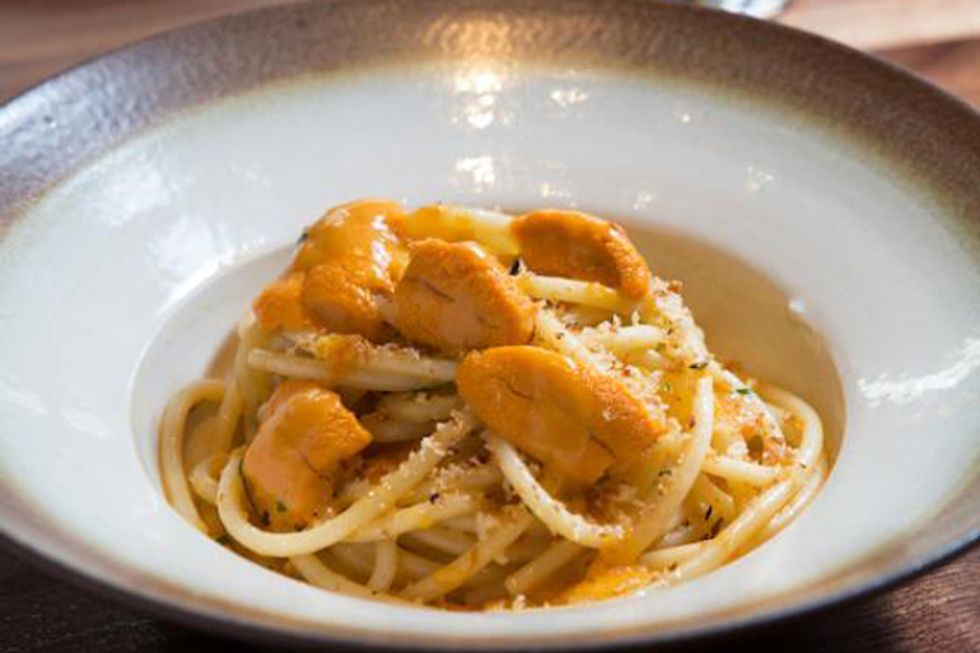 Step aside, bone marrow. Uni, or sea urchin, has been called the new foie gras, the butter of the sea, and deemed sexier than the oyster. An acquired taste to some and an incomparable treat to those in-the-know, uni is one of those delicacies that takes some warming up to. But once you do, you’ll never turn back. So do yourself a favor and get those taste buds ready for something truly mind-blowing. San Francisco has some of the best uni dishes around, and we’ve comprised a list of those unmissable bites:

Acquerello’s newest spin-off has launched with dishes like rich pork belly, a mountainous fried duck sandwich, and a few palate warmers like silky scallops and hamachi crudo. But save room for the decadent uni bucatini with breadcrumbs. Chef Adam Tortosa merges his years studying under a sushi master with experiences abroad in Italy to create a dish perfectly balanced between sweet and salty, crunchy and creamy. 1760 Polk St.

For all things seafood, we love Bar Crudo for its killer clam chowder, fresh oysters, and tempting small bites of raw seafood. For a modernized, seafood-ified bruschetta, the uni toast is the perfect bite of land and sea: crispy crostini, mashed avocado, and topped with briney sea urchin. 655 Divisadero St.

“Coqueta” means flirt or infatuation in Spanish. How fitting, then, that it serves nature’s other aphrodisiac, sea urchin. Dubbed “sea and mountain,” this dish mixes the urchin with cured meat for a surprising and sinfully delicious flavor combination. Chef Michael Chiarello tops crostini with gently melted Iberico Lardo over sea urchin. And if that’s not enough, he tops the whole thing with jamon iberico de bellota. This dish is rich and sexy — share it with someone special. Pier 5, The Embarcadero.

You can’t go wrong with Commonwealth’s six-course tasting menu. This American-meets-Asian spot has some of the tastiest octopus, venison, vegetable, and raw dishes around. But hiding on their a la carte menu is a sea urchin dish that’s not to be missed. Seaweed brioche is studded with tapioca and ginger, paired with kimchee and coastal succulents, and topped with a light-as-air sea urchin. 2224 Mission St.

Simply mention Fifth Floor and everyone’s ears perk up. It’s the quintessential fine dining experience in San Francisco, so it’s no wonder that their uni dish is one of the best and most well known in the city. Textures, flavors, and worlds collide in David Bazirgan’s Mendocino uni flan, a warmed-up version of a traditional Japanese egg custard (chawanmushi). Crab, saffron, sichuan pepper, and kaffir lime come together for a small dish that packs a mighty punch. 12 4th St.

photo by Food For Thought

The ephemeral dishes at State Bird Provisions may be small, but they pack a big punch of flavor. The ingredient-driven dishes feature everything from trout caviar to pork spare ribs. Order the Asian-inspired ginger-scallion pancake. Pillowy pancakes are topped with fresh Mendocino sea urchin, sprouted soybeans, and sesame seeds, all dressed in a tangy soy-lime sauce. 1429 Fillmore St.