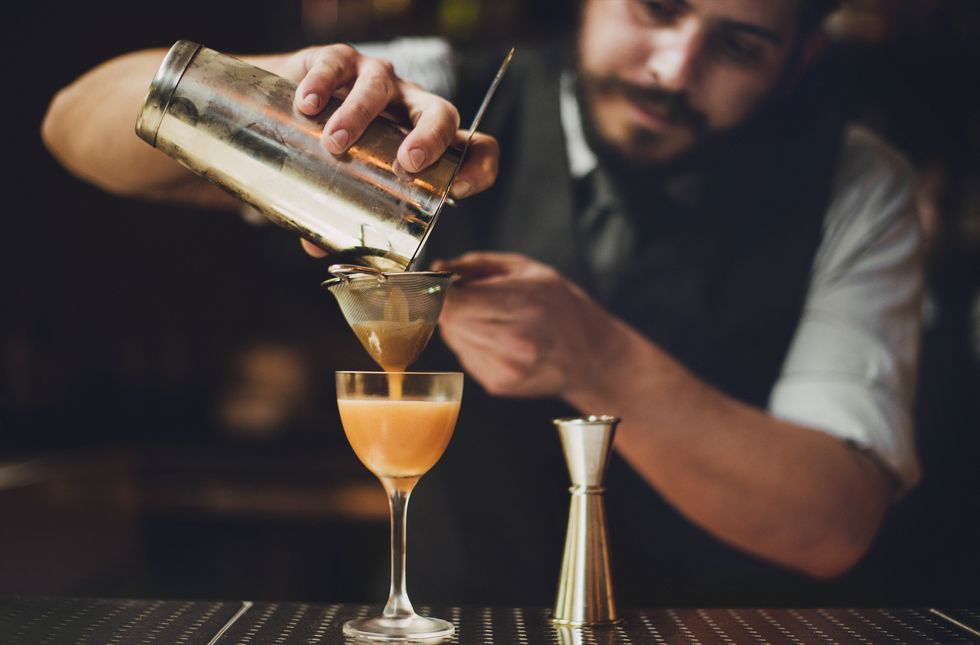 I do not get drunk. I get awesome.

Emperor Norton turns 198 on Thursday, and the Emperor's Bridge Campaign is celebrating with birthday cake and a booze raffle. Drop by Emperor Norton's Boozeland between 6:30 and 8:30pm this week to eat cake, drink at the cash bar, and buy raffle tickets to win one of three bottles of handmade spirits from Raff Distillerie: Emperor Norton Absinthe Dieu, Bummer & Lazarus Dry Gin, and Barbary Coast Rhum Agricole. Tickets are $10 per person, or free for anyone with an Emissary of the Empire card. Proceeds benefit The Emperor's Bridge Campaign, which seeks to re-name the Bay Bridge for Emperor Norton, who set out the original vision for the bridge in 1872. // Upstairs at 510 Larkin St. (Civic Center); facebook.com/EmperorNortonsBoozeland

Saturday night's Metallica concert at AT&T Park has inspired nearby Alchemist Bar & Lounge to offer a one-night menu of drinks named from the 30-year-old band's discography. Cocktails ($11) include the tequila-based Ride the Lightning, the bourbon-based Whiskey in a Jar, the gin-based Fight Fire with Fire, and The Thing That Should Not Be, made with Vodka and Red Bull. If you prefer a Harvester of Sorrow, you can hand over five bucks for a shot of Jameson or Jack Daniels. And, of course, no Metallica set would be complete without Enter Sandman, a shot of tequila or mezcal with a Tecate back. Alchemist opens at 5pm on Saturday. // 679 Third St. (South Park); alchemistsf.com

The Octopus' Garden cocktail is served in a drinking tank and meant to be shared with friends. (Image via Oro)

If you're drinking with a crowd, we highly recommend the large format cocktails at Oro. Made to share among four or more guests, each one is served in a visually striking container. Octopus' Garden—made with gin, Aperol, grapefruit, lemon, Peychauds and celery bitters—arrives in a tall glass tank mounted on a cephalopod and entangled in its tentacles. Northern Hemisphere features bourbon, Applejack, S. Maria al Monte, juniper berry, star anise, cinnamon, and lime. Both are available for $75 each during Happy Hour, every weekday from 4 to 6pm. // 8 Mint Plaza (Mid-Market); orosf.com

Missing SF Restaurant Week already? Tuesday, February 9 brings yet another opportunity to partake in prix fixe dinners at some of the Bay Area's finest restaurants, including Kokkari, Barbacco, and Gary Danko. For the 33rd Annual Dinner a la Heart, chefs at more than 40 participating restaurants will create their own three-course menus with an appetizer, soup or salad; a choice of three entrees; dessert; a glass of wine; and coffee or tea. Prices range from $75 to $200 per person; tickets are available online. Proceeds benefit Institute on Aging. // Various locations, ioaging.org

Did you know Germany has been celebrating Fat Tuesday since medieval times? Neither did we, until we heard about Schroeder's Karneval - German Style celebration on Tuesday, February 9, from 4 to 10pm. The German tradition calls for donuts, group costumes (especially clowns), thrown candy (instead of beads), and politically incorrect floats. In fact, if you and your crew arrive in a non-PC float, your first Das Boot is free. Parking fees, however, are your own responsibility. // 240 Front St. (FiDi); schroederssf.com