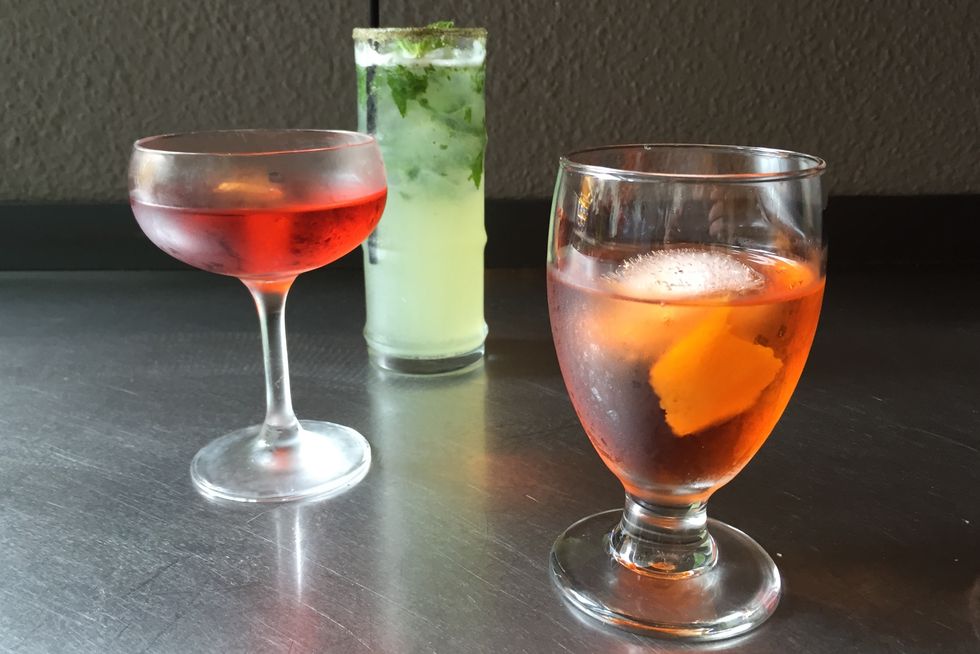 I pretend to like people every day. It's called being an adult. It's why we're allowed to buy booze.

Just in time for summer, Uno Dos Tacos has crafted six new tequila-based bebidas to drink on the outdoor patio. The Mexican Negroni puts a Latin twist on SF's current favorite cocktail, while the Quemado de Oaxaca spices things up with a mixture of mezcal, agave, pineapple juice, habanero infusion, lemon, and cilantro leaves. Pair the new drinks with carnitas-by-the-pound during happy hour, every weekday from 4 to 8pm. / / 595 Market Street

Do you know your Del Maguey from your Don Amado? Test your mezcal mettle (and your liver) this Sunday at Bartlett Hall's Mezcal Tasting event, from 2 to 6pm. For $35, you can taste the wares of 20 different mezcal vendors, including Wahaka, Clase Azul, and Ilegal. Five restaurants will be on site serving small bites, which are included in the ticket price. Reserve a ticket in advance at events@bartletthall.com, or purchase tickets at the door. / / 242 O'Farrell

Nothing says summer like a bucket of ice cold beer, or a Midsummer Festival. Starting this week, Monk's Kettle will bring you a bucket of four Modern Times canned beers for $25, from noon to 4pm. As the summer progresses, you'll find Firestone Walker, Ballast Point, or Evil Twin cans in your bucket, among others. Sour beer lovers will want to join the Midsummer Sour/Funk Fest on July 25, when half of Monk's Kettle's taps will be taken over by popular sours from the likes of Allagash, Russian River, Rare Barrel, Almanac, and Cantillon. / / 3141 16th Street

If you've been waiting for a good excuse to visit Wine Country, your patience is about to pay off. Russian River Valley Passport Weekend (formerly known as Passport to Pinot) takes place this Saturday and Sunday, from 10am to 4pm. More than 30 wineries in this premier AVA for Pinot Noir and Chardonnay will be pouring pre-release wines, barrel, library and limited edition winery-only wines as part of the ticket price, which is $65 for the entire weekend, $40 for Sunday only, and $150 for the VIP experience, which includes a whole pig roast and fireside chat with storied vintners. Purchase tickets online.

It's not just about wine in Russian River. Sonoma Cider is hosting the 3rd Annual Small Town Comedy Festival this Friday at 7pm in Healdsburg, featuring 25 comics who have performed on HBO, Comedy Central, and Conan O'Brien. Sonoma Cider will be converting its warehouses into four separate comedy venues, which will open into a common pavilion featuring food trucks, live music, and audience members from other warehouses. Tickets are available online for $25, or you can pay $20 for a pre-show on Thursday evening at one of four different wine tasting rooms scattered around downtown. Comedians will rotate through the tasting rooms throughout the evening. / / Various locations in Healdsburg