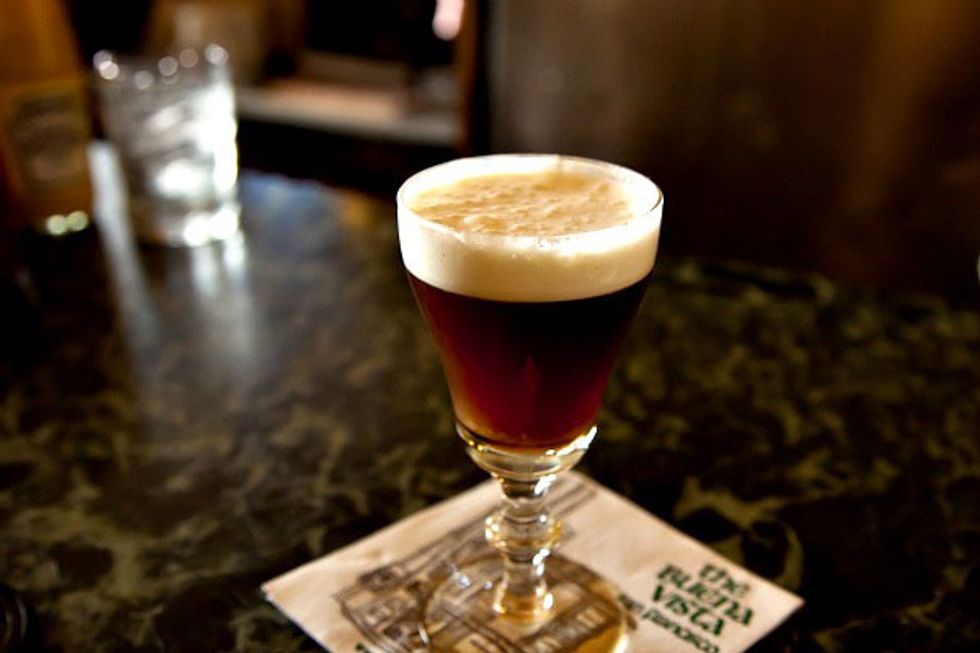 Drink up SF History: How Irish Coffee Came to America

The setup looks like a magic trick. Ten tulip-shaped champagne glasses side-by-side on a grated rail behind Buena Vista Cafe's crowded saloon bar. Two cubes of C&H sugar drop into each glass. The bartender tips a pot of Peerless coffee and partly fills each glass down the line. A spoon follows, briskly pitching steam into the air. The heat is extinguished with a unbroken pour of Tullamore Dew whiskey and a white dollop of whipped cream. From beginning to end, every step is executed with the speed and precise timing of a magician. But the real trick is serving the remaining 1,990 glasses every single day to the throngs of people waiting to taste the 63-year-old recipe that marked Irish coffee's American debut.

Buena Vista Café opened in 1916 in the bottom floor of a boarding house at the corner of Hyde and Beach. The tavern had a good view of the bay, and thirsty fisherman and dockworkers from San Francisco's wharf drifted to the bar after work, made more noticeable by the pink neon sign installed in 1934.

5,000 miles away, Chef Joe Sheridan worked at a waterfront cafe in Ireland's Foynes Harbor, a major wartime terminal for trans-Atlantic seaplanes. In 1943, after bad weather forced a Newfoundland-bound flight to return to the harbor during the night, Sheridan offered the dejected passengers warm coffee mixed with whiskey. When the American travelers asked if they were being served Brazilian coffee, Sheridan explained it was “Irish Coffee," which he would later describe as consisting of "cream as rich as an Irish brogue, coffee as strong as a friendly hand, sugar as sweet as the tongue of a rogue, and whiskey as smooth as the wit of the land."

Shannon Airport, which opened on flat bogland north of the Estuary in 1942, meant the end of Foynes station, but not its Irish Coffee. In 1952, Stanton Delaplane, a Pulitzer Prize-winning travel writer for the San Francisco Chronicle, discovered the drink during a layover at Shannon Airport. He returned to San Francisco, thirsty for more.

Delaplane convinced the owners of the Buena Vista, Jack Koeppler and George Freeberg, to help him recreate the drink. The sticking point became the cream, which refused to float atop the coffee, unlike its Irish counterpart. The tavern owners continued undeterred; Koeppler making a pilgrimage to Shannon Airport while Delaplane nearly collapsed on the cable car tracks outside the cafe after sipping from dozens of attempts to perfect the drink. The breakthrough came when city mayor and dairy-owner George Christopher suggested frothing cream that had been aged several days. The first Irish coffee in San Francisco was served on November 10, 1952, and by its own estimate, the establishment has served more than 30 million glasses since then.

Today, Buena Vista is the largest consumer of Irish whiskey in the country. The Nolan brothers, Paul and Larry, have both been pouring the drink for nearly 40 years, in traditional white coats behind a classic dark wood bar where each pour is a performance. And though there have been a few changes, including a controversial switch from their private label whiskey to Tullamore Dew in 2006, Buena Vista Café remains a little slice of classic San Francisco waiting with a warm drink at the last stop on the Powell-Hyde cable car run that overlooks Fisherman's Wharf. // Buena Vista Cafe: 2765 Hyde St (Fisherman's Wharf), thebuenavista.com