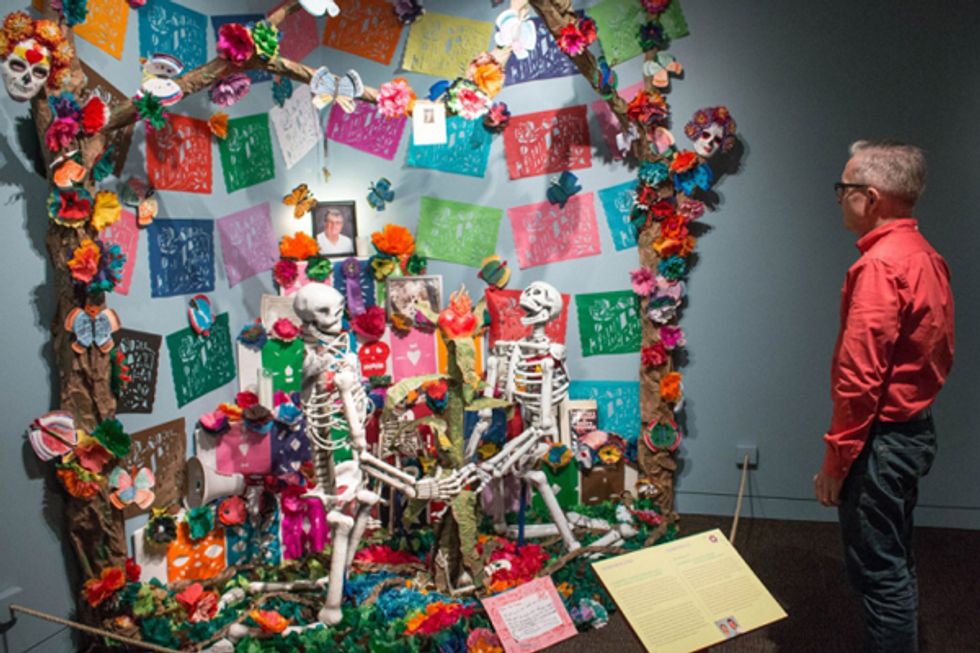 Save the dates for these art, dance, film, literary, music, and theater events.

1. Day of the Dead Community Celebration at the Oakland Museum of California

Forget Halloween; Celebrate the ancient Mexican tradition of Dia de los Muertos at the Oakland Museum of California this October. This fall marks two decades of annual Day of the Dead celebrations at the museum, and you can expect a fiesta of epic proportions including crafts, authentic local Mexican food, dance and musical performances, colorful ofrendas, and a special ceremonia to celebrate life in the Bay Area. And don’t forget to browse all the Day of the Dead merchandise crafted by local artisans to spruce up your home altar. // Sunday, Oct. 26, 12-4:30pm, 1000 Oak St, Oakland, museumca.org

Bringing together the art of storytelling and the critical issues of urban society, Unruly Story Fest is your ticket into the minds and voices of Oakland. Festival goers are treated to drinks, local bites, and mingling as well as seven live shows—including a sit down with NPR’s Glynn Washington—various writers’ workshops, and a StorySlam that’s sure to bring down the house. Profits support the Oakland Public Education Fund. // Saturday, Sept. 26, 1-10:30pm, 410 14th St, Oakland, unrulystoryfest.org; Workshops: 1:00–5:30pm; Doors Open: 6:00pm; Shows: 7:00–10:30pm

Ready to laugh until your face falls off? Look no further than the dynamic duo of "Parks and Recreation" star Aziz Ansari and It girl Amy Schumer—who’s currently in the process of taking over the world—together at last at the Shoreline Amphitheater in Mountain View. Be there to experience the drama, the laughter, and the inappropriate jokes live. This will definitely be something to write home about. // Tuesday Oct. 13, 5pm, Shoreline Amphitheater, Mountain View, oddballfest.com

4. Bees at the Oakland Museum of California

A presentation of the world’s hardest working insect, “Bees: Tiny Insect, Big Impact” takes an in depth look at one of the most (if not, THE most) important creatures to human agriculture and our natural environment. In an immersive gallery environment, visitors can explore the causes of bee population decline, learn about the significance of bees to California's economy and ecosystems, and learn how to care for our favorite pollinators. // Runs through July 24, 2016, 1000 Oak St, Oakland, museumca.org

Maybe you’ve heard of Jean-Michel Othoniel—his series of three sculptures “The Beautiful Dances” became the first permanent artworks in the gardens of Versailles in over three centuries. Now, the renowned French artist is heading to San Francisco to install two gorgeous sculptures: “Peony, the Knot of Shame” will be installed in the 836M gallery, and “La Rose des Vents,” a kinetic and aluminum sculpture, will be places outside the Conservatory of Flowers in Golden Gate Park. Don’t miss these truly remarkable works of public art. They’re France’s best gift to the States since the Statue of Liberty.  //  Runs Sept. 26, 2015 - Jan. 14, 2016, 836 Montgomery Street, San Francisco, 836m.org; Conservatory of Flowers, 100 John Kennedy Drive, San Francisco

How do you picture the future? Before 3D modeling and computer-aided design software, scientists relied upon artists to explain the possibilities for humanity beyond Earth. This fall, the New Museum Los Gatos is exhibiting never-before-seen selections from the NASA space settlement paintings by Rick Guidice. Now nearly 40-years-old, the paintings offer a fascinating look into what a past generation believed was possible in this galaxy and beyond. // Sept. 17, 2015 - Feb. 14, 2016, 106 E. Main Street, Los Gatos, numulosgatos.org

The beauty of Treasure Island Music Fest lies in it's simple two-stage set-up: It's one of the only festivals around where you don't have to miss a single note from any band. Tune in this year to hear DEADMAU5, Panda Bear, Azelia Banks, Cashmere Cat, The War on Drugs and so many more, on the soon-to-be-completely-remodeled Treasure Island in the middle of the bay. If nothing else, it’s worth it for the views from the top of that iconic ferris wheel. // October 17-18, Treasure Island, treasureislandfestival.com

As you probably guessed from the Model Ts driving around the city, 2015 marks the centennial of the Panama-Pacific International Exposition (PPIE), the San Francisco world’s fair that celebrated the opening of the Panama Canal and the city’s reconstruction following the 1906 earthquake. Jewel City at the deYoung revisits this historical moment  with more than 200 works by major American and European artists, most of which were on display at the world fair. // Oct. 17-Jan. 10, 50 Hagiwara Tea Garden Dr, San Francisco, deyoung.famsf.org

In March, head back to the museum for a special retrospective curated by André Leon Talley, former editor-at-large for Vogue, celebrating the life and career of one of fashion’s most influential designers. Take a stroll through Oscar's incredible life as different sections of the exhibit trace de la Renta’s upbringing in the Dominican Republic; the rise of his career in Spain; his formative years spent in the world’s most iconic fashion houses; and his eventual role as a designer for many of the most influential and celebrated personalities of the 20th century. // March 5th, 2016 - May 30th, 2016, 50 Hagiwara Tea Garden Dr, San Francisco, deyoung.famsf.org

Known for her intimate portraits of the world's biggest stars, legendary photographer Annie Leibowitz is headed to SFMoMA this fall—and we're super excited. Leibowitz (a San Francisco Art Institute alum) will be honored with the inaugural Contemporary Vision Award at the SFMOMA’s premier fund-raising event, Modern Art Council, which will will feature a dinner and discussion with Annie in the flesh. // Nov. 3rd, Regency Ballroom, 1300 Van Ness Ave, San Francisco, sfmoma.org

Known as the "Everest of tragedies" for the sheer scale of emotions an audience can feel in a single play, Shakespeare's King Lear is headed to the Mission this month. Anthony Heald—fresh off his stint in The Elephant Man on Broadway—joins the ranks of legendary actors such as Laurence Olivier, John Gielgud, Anthony Hopkins, and Ian McKellen in this anticipated rendition of the classic Elizabethan play in which an aging ruler selfishly divides up his kingdom and, in the process, tears his family, and his country, apart. // Sept. 16th - Oct. 11th, 925 Mission St, SF, calshakes.org

No longer just the stuff of science fiction, technology has forever impacted our lives down to the daily minutia. At San Rafael's Art Works Downtown, the 1337 Gallery presentation of "Technological Mediations" brings together established and emerging artists of various mediums—including such heavyweights as Jim Campbell, known for his stellar work with LED lights, and JD Beltran, whose award-winning Cinema Snowglobes were first created locally at Workshop Residence—to share a dialogue about our lives in the digital age.  //  July 31 - Sept. 18, 1337 4th St, San Rafael, artworksdowntown.org

Now entering its third season, the nonprofit Dance Theater SF has announced a new artistic director in Dexandro "D" Montalvo, formerly the group's resident choreographer who has worked with everyone from ODC to the Black Eyed Peas, and whose show "Ocean" made a splash on the Z Space stage last spring. This season, be prepared to be enchanted by the beauty of form and power in fall programs featuring some elite dancers Amy Seiwert and Robert Moses.  //  Nov. 6-8, Cowell Theater (Fort Mason Center), SF, dancetheatersf.org

19. Nutcracker at the San Francisco Ballet

A San Francisco holiday tradition since its debut on the War Memorial stage back in 1944, the SF Ballet's production of The Nutcracker is a classic with a local twist—the scene is set in the City by the Bay. Bring mom, dad, kids, and granny, and dress in your holiday finest—this is an old-fashioned annual treat for the whole family that's not to be missed.  //  Dec. 16 - 31, War Memorial Opera House, 301 Van Ness Ave., SF, sfballet.org

The 2015-16 season at the San Francisco Opera is looking to be an adventurous one. After the season's kickoff with a Verdi classic (Luisa Miller), things get interesting with Stephen Sondheim's Sweeney Todd (Sept. 12-29); Rossini's The Barber of Seville (Nov. 25 - Dec. 9); and Gordon Getty's The Fall of the House of Usher (Dec. 8-13). But just wait till 2016, when Spanish director Calixto Bieito makes his American debut with an uncompromising take on Carmen. GQ called it "raunchy." This isn't your grandmama's night at the theater.  //  Season begins Sept. 11 at War Memorial Opera House, 301 Van Ness Avenue, SF, sfopera.com

A friend and contemporary of such Surrealist masters as Salvador Dali and Rene Magritte, Leonor Fini—a native of Buenos Aires but a Parisian for much of her life—refused to put herself in a box, even a Surrealist box (never mind that she regularly exhibited alongside the movement's founders). Working frequently with themes of femininity, female sexuality, and provocative relationships, Fini's work echoes as much of the Pre-Raphaelites as of Dali. The artist passed away in 1996, but makes her American exhibit debut at Weinstein Gallery this month.  //  Sept. 26 - Oct. 31, Weinstein Gallery, 444 Clementina St (SF), weinstein.com/artists/leonor-fini/

Even as Colombia sits at the cusp of a modern revolution and becomes, increasingly, a destination for adventurous tourists, the country remains thick with conflict, torn by war, drugs, and poverty. A new show at SF Camerawork trains the lens on Colombia today. Fourth World: Current Photography of Colombia includes the work of four shooters whose images explore various experiences of class, identity, and survival in Columbia's day to day life.  //   Aug. 28 - Sept. 4, SF Camerawork, 1011 Market St, 2nd Floor, SF, sfcamerawork.org

23. LIZZIE at the Ray of Light Theatre

“Lizzie Borden took an axe, gave her mother forty whacks...” Say it all together now and see it live at Ray of Light Theatre, where LIZZE is set to shake the theater scene with a driving score, a legendary cast of women, and a modern twist on the 19th century tale.  //  Sept. 25 - Oct. 17, Victoria Theatre, 2961 16th St, SF, rayoflighttheatre.com

24. Phantom of the Opera at SHN Orpheum Theatre

On the heels of a sold-out U.K. tour, producer Cameron Mackintosh’s Phantom of the Opera is back in SF and the ladies are swooning. The production is all pro, with brilliant new scenic design by Paul Brown; original costume and lighting design by Tony Award winners Maria Björnson and Paule Constable respectively; new choreography by Scott Ambler; and new staging by director Laurence Connor. Rewatch the classic story again and again. May the phantom be with you.  //  Aug. 19 - Oct. 4, Orpheum Theatre, 1192 Market St, SF, shnsf.com

25. The Sisters of Invention at San Francisco Center For The Book

Calling all book nerds! SF Center for the Book is celebrating three seminal women book artists from the Bay Area with an exhibit, reading, and multimedia performance that sheds light on the past 45 years of book art and touches on the women's personal journeys and historical work.  //  Oct. 23rd, 375 Rhode Island Street, SF, sfcb.org

26. Fringe Festival at the EXIT Theatre

This year's SF Fringe Festival brings with it 150 performances by 35 indie companies that range from theater and to comedy, clowning, magic and more. How will we fit it all into our busy schedules? Well, we’re going to try. For two full weeks, EXIT Theatre will present short snippets that you just don't want to miss.  //  Sept. 11-26, EXIT Theatre, 156 Eddy St, SF, sffringe.org

28. Paul Graham: The Whiteness of the Whale at Pier 24 Gallery

British lensman Paul Graham gets a big fat American welcome with a hefty showing of his images—three complete bodies of work comprised of some 60 pieces—at Pier 24 Photography this fall. Upon first glance, Graham's crisp bold images reflect scenes from daily life—a parked car, a walk to work, a cigarette at the bus stop—but speak loudly of issues including racial and social inequality. Graham wants his audience to think.  //  Aug. 3, 2015 through Feb. 29, 2016, Pier 24, The Embarcadero, SF; call for reservations; pier24.org/exhibitions

If the tagline "Where Brain Science, Wine, and Cuisine Sizzle!" gets you all hot and bothered, you will definitely want to head to Rutherford for this year's Music Fest for Brain Health. It's educational, with a scientific syposium featuring "rock star neuroscientists"; yummy, with a VIP dinner cooked by SF's Hubert Keller; and fun—two-time Grammy winner Melissa Etheridge headlines.  //  Sept. 19, Staglin Family Vineyard, 1570 Bella Oaks Ln, Rutherford, music-festival.org