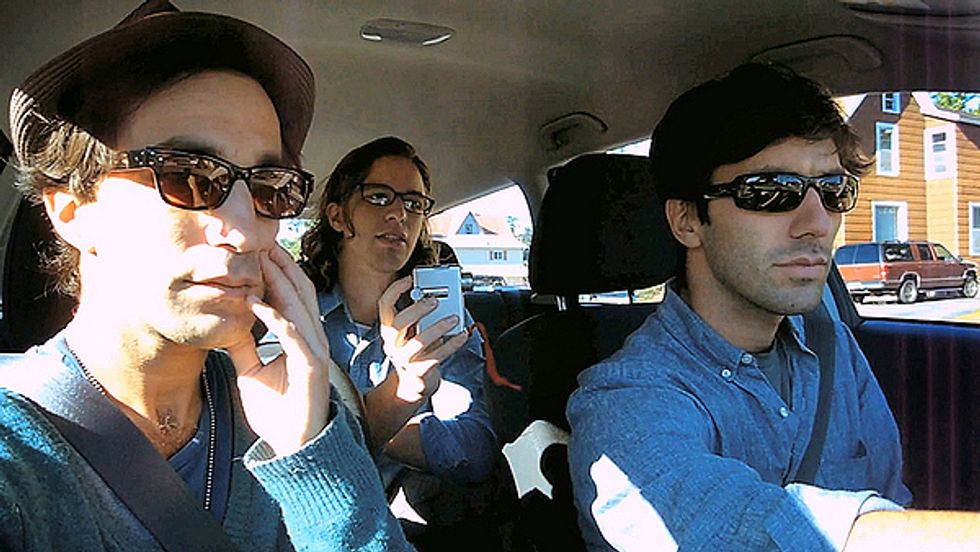 Filmmakers Unravel the Mystery of 'Catfish'

It begins as a roundabout version of a classic Internet love story, if such a thing can be said to exist. Eight-year-old Abby Pierce, an aspiring artist from small-town Ishpeming, Michigan, contacts Yaniv “Nev” Schulman, a 24-year-old New York photographer, on Facebook, asking permission to paint one of his photos. He gives it, and soon receives a copy of the painting in the mail.

The story doesn’t end there. Intrigued by Abby’s precociousness and her 19-year-old half-sister Megan, a striking blonde singer, Nev pursues a relationship with the Pierces, first online and later on the phone. He gets to know their mother, Angela, who tells him she’s capitalizing on Abby’s talents by opening her own art gallery.

Nev falls for Megan, and the two exchange more than 1,500 text messages over eight months, planting the seeds for a long-distance romance and a possible meeting. More paintings arrive in the mail. And Nev’s roommates, brother Ariel “Rel” Schulman and filmmaking partner Henry Joost, capture it at his end on film.

The story doesn’t end there, either, but what follows is a stranger-than-fiction series of revelations, about Abby, Megan and Angela, that have led some, including Super Size Me filmmaker Morgan Spurlock, to conclude that Catfish, Schulman and Joost’s documentary, is a brilliantly conceived hoax.

Is it? Not according to Schulman and Joost, who didn’t know how to respond when Spurlock approached them after a screening at this year’s Sundance Film Festival, effusively praising their “fake” documentary. To them, Nev’s story – sunny on the surface, but fraught with multiplying inconsistencies – had become a rapidly unfolding mystery that happened to lend itself to gripping cinema. (Want to know more? Keep reading, but be warned: Spoilers lie ahead.)

On the genesis of Catfish:
Henry Joost: “We film things all the time. Rel and I run a busy production company, and we let off steam by filming each other. We keep these little HD cameras on us at all times to capture little things that amuse us, and Rel had the instinct to start filming Nev. We always wanted to make a movie about his brother because Nev lives life the way we wish we could – he just jumps right into things. He’s confident, he’s funny. He’s our muse.”

Ariel Schulman: “I find my brother fascinating. I think he’s wildly cinematic, so I film him all the time. He’s wound so tight – like a young De Niro, every cell in his body reacts. When I point the camera at him, I don’t know if he’s going to talk to me or hit me. And I always have a camera on me.”

On skepticism about the film’s authenticity:
AS: “We were as surprised as anyone else would be – it was a real experience, we lived it, and it never occurred to us that someone would question that. But it’s kind of understandable. People are used to mockumentaries – they’re a popular style of filmmaking. And YouTube certainly changed the way movies look and stories are told. Advertising companies commission filmmakers to create intentionally viral videos that look and feel real but are not. But the movie is real. We can’t put it any more simply than that.”

On the emotional toll of living on camera:
Nev Schulman: “There was no pressure at first. During those first couple months, Rel only filmed a handful of clips. I was having this unusual online, pen-pal friendship with an 8-year-old girl in Michigan It was weird, but I didn’t think anything of it.

“When I started communicating with Megan, things changed. I wasn’t into the idea of Rel and Henry filming our correspondence because I didn’t understand the motivation. Megan and I didn’t have anything to do with Abby, and Abby was the subject, not me. I asked Rel not to shoot certain stuff because I thought it was too personal, but once I discovered Megan had lied to me about her music, the switch flipped. I wanted Rel to film everything, because I needed to have a truthful account of how things went down.”

On their suspicions that something about Nev’s improbable romance was amiss:

HJ: “We knew it seemed too good to be true, and when we started receiving the paintings, we suspected it was some kind of financial scam. But our suspicions were responded to in a very smart way. Whenever we began to question Angela’s stories, she volunteered answers without us having to ask. Plus, Nev was able to explain everything away. He wanted it to be true so badly that he overlooked any red flags that popped up.”

NS: “Angela sent us a check for $500, part of the prize money Abby won in an art contest. We told her it wasn’t necessary, but she insisted – she said we deserved a portion of the credit. So we stopped thinking it was a scam.”

HJ: “When we were reading the correspondence later, it all seemed obvious that things were not what they seemed – Angela dropped so many clues – but I think one of the real lessons of this experience was that if you want something to be true, you are willing to overlook almost anything, to put on blinders and only see what you want to see. This also goes for Rel and me. We wanted the story to have a happy ending, too.”


On naming the movie:

AS: “We didn’t settle on Catfish until the night before they printed the programs at Sundance. We had been considering a number of different titles – The Facebook Family and It’s All Downhill From Here, to name two. In the end it was our friend Ben Younger, who directed Boiler Room, who saw the movie and said, ‘You have call it Catfish.’ And it’s perfect. Once you watch the film, you see that it fits.”

On their filmmaking future:
HJ: “We always wanted to make narrative features and documentaries, and this seems to have fast-forwarded our careers by several years. What we’d like to do next is make a narrative piece, and we’re currently working on a script.”

On how the Catfish experience has changed their perception of social-networking media:
NS: “I don’t think the experience has changed me, it’s merely confirmed what I always believed. On the one hand, you don’t want to leave yourself vulnerable to people, but at the same time you don’t want to close yourself off, either. If I’d been distrustful of people from the start, I never would have had this incredible experience that’s opened doors for me and my friends, and allowed me into someone’s life. After I met Angela, I needed a break, but we remain friends, and we remain in contact. She’s a fascinating woman.”

HJ: “We imagined a lot of scenarios, but in my wildest imagination I don’t think I could have conjured up Angela in all of her complexity. More surprising still was that we all got along so well. We found Angela to be fun, smart and engaging. I think she has a lot to offer as a writer and an artist, and I hope this movie helps her accomplish that. It was also a pleasant surprise to find Abby to be a very real and very normal 8-year-old girl.”