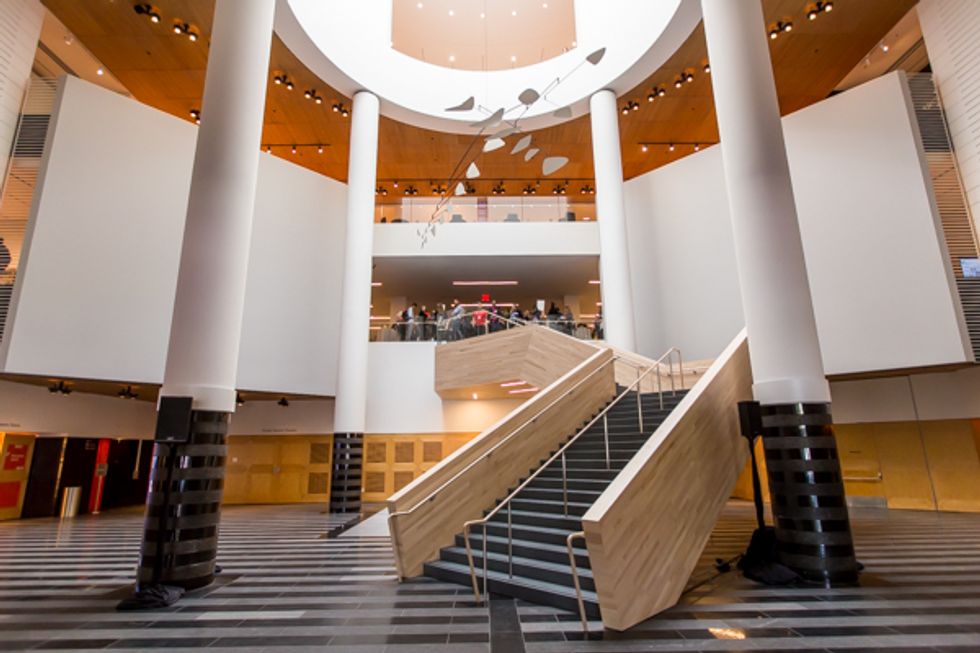 It's been nearly three years since SFMOMA shut its doors with the promise to return much bigger and better in 2016. On Saturday, May 14, the celebrated art museum will finally unveil its richly expanded collection in a striking new home.

(The views from the new museum are just as wonderful as the art.)

SFMOMA's gorgeous new home will have social media buzzing for months. In 2010, SFMOMA tapped international firm Snøhetta to design a new structure to exhibit the museum's expanded collection and seamlessly meld with the existing building designed by Swiss architect Mario Botta in 1995. The new 10-story structure rises above SoMa like a futuristic edifice from the planet Hoth. The facade is comprised of 800 unique panels that appear to ripple and shift with the light, a literal reflection of our famously foggy climate. Made of a lightweight material embedded with sand from around the Monterey Bay, the 235,000-square-foot addition actually weighs less than the original 225,000-square-foot building.

(A Richard Serra sculpture greets guests as they enter on Howard Street.)

Guests now enter on Howard Street, catching sight of ghost signs that were exposed when a fire station was removed to lend space for SFMOMA's expansion, as they walk in. Visitors are greeted by a gargantuan Richard Serra sculpture of burnished metal and a bold patterned wall painting by Sol Lewitt dubbed Loopy Doopy. As part of the museum's commitment to community access, the first two floors — nearly 45,000 square feet — are free to the public. The museum will also offer free admission to everyone 18 and under. Director Neal Benezra stated, “We want to mean more to more people than ever before."

(The largest living wall open to the public graces the third floor terrace.)

Guests are sure to swoon for the third floor outdoor terrace, anchored by a dramatic 150-foot living wall — the largest public one in the U.S. — whose stretch of green looks like a mini Golden Gate Park affixed to the building. Another terrace on the seventh floor offers invigorating views of the downtown cityscape. Craig Dykers, lead architect and founding member of Snøhetta, encourages visitors to take the stairs. From the spectacular Roman Steps on the ground floor to the floating staircases of the upper floors, each unique stairway functions as its own sculptural objet d'art lending strong incentive to bypass the elevators.

Even restrooms delight with a shock of of monochromatic color — a different hue for each floor — that wouldn't be out of place at the clubby W Hotel next door. As arresting as the art and interiors are, some of the best visuals are outfacing via huge wood-framed windows that offer glimpses of SoMa's hidden rooftops and busy alleyways. With so much visual info to digest, museum fatigue is real. Bleary-eyed patrons can seek refuge in smartly designed “palate cleansers," a series of composed spots to rest, reflect and mind your Instagram feed.

When SFMOMA moved to their new South of Market location in 1995, the museum possessed 12,000 pieces of art. Today, the number has grown to 33,000, thanks to over 1,000 pieces made available from the Doris and Donald Fisher Collection — a remarkable assemblage of masterworks that began as decoration for bare Gap walls — in addition to the museum's Campaign for Art which committed 3,000 works from over 230 individuals associated with the museum.

The Doris and Donald Fisher Collection is a boon for the museum with postwar and contemporary works from artists such as Roy Lichtenstein, Agnes Martin, and Gerhard Richter. The inaugural shows feature beautiful galleries of some of the Fisher's favorite artists. For the late Don Fisher, big powerful works by Anselm Kiefer, and for Doris, serene paintings by Ellsworth Kelly whom she maintained a close friendship with until the artist's death.

The new SFMOMA also aims to be an epicenter of photography and film. Occupying most of the third floor, the Pritzker Center for Photography is the largest gallery and research space devoted to photography among art museums in the nation. Plus, a new partnership with the San Francisco Film Society means a new film program, Modern Cinema, exhibited in the newly renovated Phyllis Wattis Theater

Aiming to embody a 21st century art museum, SFMOMA also premiered a new app that guides guests through galleries with commentary from a wide range of personalities including Martin Starr and Kumail Nanjiani of HBO's Silicon Valley as well as players from the SF Giants.

Corey Lee, chef-owner of the Michelin three-star restaurant Benu and Monsieur Benjamin, is opening the museum's destination eatery. In Situ will present a rotating menu of dishes contributed by an all-star list of 80 international chefs including Rene Redzepi, David Chang, and Alice Waters. The restaurant is expected to open in June. For more casual fare, Cafe 5 will serve a contemporary cafe menu adjacent to the sunny fifth floor sculpture garden. And San Franciscans will feel right at home at the museum's Sightglass outpost, a hip mini coffee bar carved out on the third floor.

SFMOMA is offering free admission on opening day but all visitors must have a ticket via online reservation system and the museum is currently sold out. Still, eager fans can join ribbon-cutting festivities with city dignitaries at 8:30am that morning.