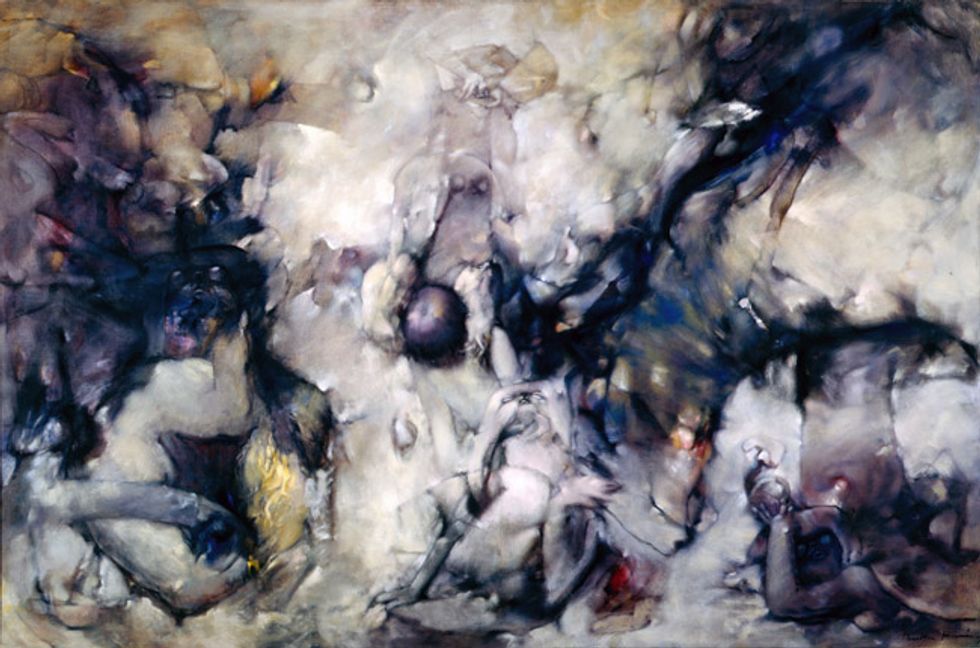 Need an art fix to kick off the new year? Step right this way.

For the first time, Gallery Wendi Norris will dedicate the entirety of its 5,000 square foot space to a single artist. The seriousness of this gesture is well placed, as anyone familiar with the work of Dorothea Tanning knows. The surrealist artist, who died just last year at the age of 101, produced a prodigious amount of work over her long, distinguished career (MOMA and the Tate Modern, among other institutions, hold some of it). Unknown but Knowable States features a particularly significant twenty year period spanning the sixties and seventies, during which Tanning created some of her largest and most impressive works–nebulous, beguiling, sexually charged paintings and sculptures. The show is not to be missed.

The Aunque, at Romer Young Gallery

Bay Area artist Amanda Curreri's latest work is a veritable multiplication table of conceptual spaces. Its title, The Aunque (meaning "even though" in Spanish) itself implies two: One existing despite the other. Factor in the language translation and have we got four? It's to be seen. Anyway, expect several paintings, a video, a hand-sewn and -dyed flag, "confounding cocktail napkins," and perhaps even some theater, all rendered in Curreri's brand of bright Active Formalism. Taken with the Wild West, the artist describes the exhibition as a space (or spaces) of poetry and of outlaws. Pocket-knives optional.

Love, Life, Art and the Devil, at Fouladi Projects

Seasoned participants in the San Francisco art scene are well aware of Sacha Eckes and her off-beat, often anxiety-ridden, yet tender illustrations. The artist was a visible member of the Mission Arts community throughout the 1990s and much of the 2000s, before moving to Antwerp, Belgium, where she currently resides. Love, Life, Art and the Devil is a chance to acquaint or reacquaint ourselves with the signature blend of dark humor and real pathos that remain a hallmark of Eckes' practice to this day.

We often think of artists as wedded to their medium of choice, but it is not a binding contract. Indeed, for Distraction, 60SIX tasked three artists with producing a body of work outside their go-to medium, and the results look anything but amateur. Mills College graduate Heike Liss, usually a video and photography artist, began creating large charcoal drawings of compelling, furry forms. Brooklyn painter Huey Crowley offers a selection of doodles accomplished while watching the tube. Laina Terpstra, a figurative painter by and large, took the opportunity to dive no-holds-barred into her passion for dance. These new paintings announce the embodied movement of their making, which involved scrapers, sweeping and drips rather than controlled brush strokes.