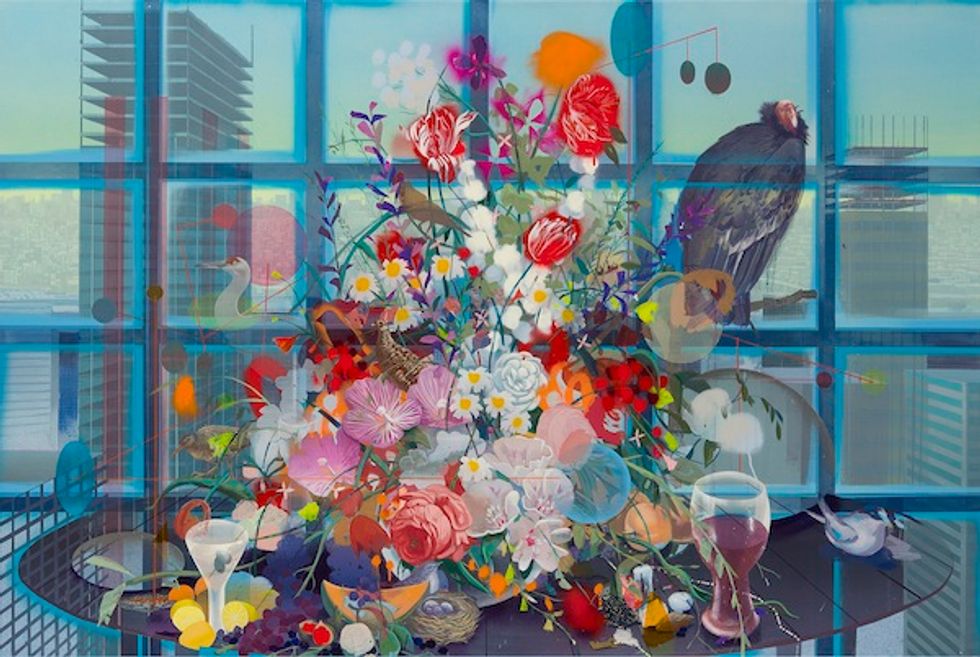 Four stellar art shows this week showcase two distinctive sensibilities: A meditation on decay, and an affirmation of civilization. On the one hand, Robert Minervini creates beautiful vanities paintings that throw into relief the peril of California wildlife and Alex Lukas imagines an apocalyptic yet serene end-time for post-industrial society. On the other, dancer Lenora Lee is busy crafting pieces that celebrate community infrastructure, while Andy Vogt's lumberyard salvages transform a gallery into a space of manifold architectural possibility. A leg on both sides is the way to go.

After Glow: As the Wick Burns, at Electric Works Gallery

With these thirteen still lives, painter Robert Minervini presents a contemporary answer to the traditional European vanitas painting – a work that served as a symbolic reminder of the inevitability of death, often through imagery like wilted flowers. Minervini's memento mori arrives in the form of California wildlife that is on the endangered species list. Ranging in scale from modestly sized to quite large, the artist's meticulously layered and detailed canvases are the product of a mixed media approach involving acrylic, paper and sometimes cellophane. As the viewer approaches, these reminders of ecological disaster begin to bloom.

After Glow: As the Wick Burns runs from May 10 through June 29 at Electric Works Gallery, 1360 Mission Street. Opening reception: Friday, May 10 from 6 - 8 pm

Andy Vogt: Submerged on the Surface, at Eli Ridgway Gallery

For his first solo show at Eli Ridgway gallery, Andy Vogt presents what may look like a lot of detritus. He mines the lumberyard for Douglas Fir lath, which he then configures in a distinctive manner that reads as graphic and architectural by turns. The whole two-level gallery space will be Vogt's domain, as the artist arranges a transformative mixture of sculpture, installation and drawing, in which even the works' shadows play a significant role.

Submerged on the Surface runs from May 11 through June 22 at Eli Ridgway Gallery, 172 Minna Street. Opening reception: Saturday, May 11 from 4 - 7 pm

There is a not-so-subtle apocalyptic bent to Alex Lukas' drawings. In his finely detailed works on paper, the artist forecasts eerie, sometimes desolate futures for the post-industrial world: Towers burn, entire cities sit submerged under water. And yet, there is a palpable serenity – the gallery even suggests optimism – to these distinctive works. In the project room, Richard Colman's brightly colored drawings and paintings present a complementary attitude, exploring the relationship between man and animal, civilization and nature.

"The Escape;" photography by Robbie Sweeny

The Escape and Rescued Memories: New York Stories, at the de Young Museum

As one of the de Young museum's artist fellows, multi-disciplinary dance artist Lenora Lee is hard at work devising and crafting two companion dance pieces, The Escape and Rescued Memories: New York Stories. Both pieces take up the narratives of Chinese immigrants to the United States at the turn of the twentieth century, who, finding themselves in dangerously vulnerable positions, sought refuge from fates such as forced domestic labor or human trafficking in key community shelters and institutions. Throughout the month of May, visitors will have a rare opportunity to see the creative process underway. Come by this Friday evening for an open rehearsal and panel discussion.