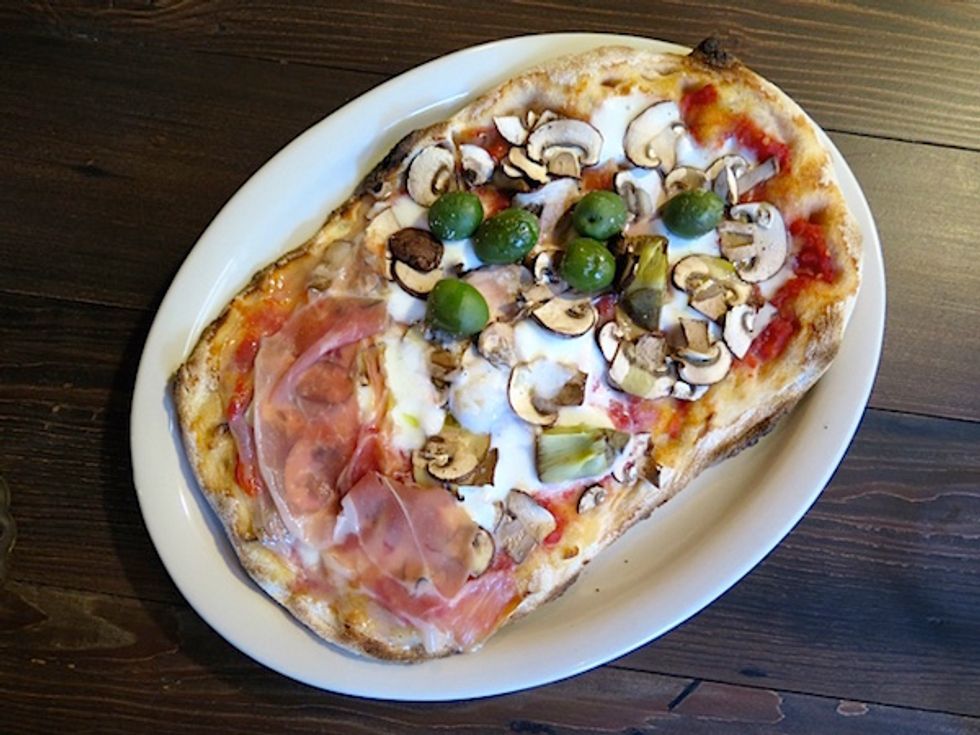 Four New Pizzas to Have in Your Life

It’s a good thing pizza is one of those amazing things people don’t get tired of (and if you do, who are you?). Pizza for breakfast, pizza for happy hour, pizza before the ballgame….we have you covered with these four new spots.

The brothers Mitchell and Steven Rosenthal (Town Hall, Salt House, Anchor & Hope, La Capra) were missing the East Coast pizzas of their youth, so they opened this casual Italian joint in SoMa to scratch that itch. You’ll find two kinds of pizzas on their menu, made with a Jersey-style crust (which is softer) or a California-style crust (which is cooked in a hotter oven). There’s also a Jersey chopped salad, some tasty pastas, and lunchtime brings a chicken Parm or meatball sandwich. Bonus: they’re now serving a breakfast pizza Mon–Fri 7am–10am with eggs and a choice of smoked salmon or prosciutto, plus some other rise-and-shine options. 145 2nd St. at Minna, 415-912-1502.

Here’s your chance to try a style of pizza you won’t find anywhere else in the U.S., the pinsa. It’s an ancient Roman style of flatbread, and Roman owner Gianluca Legrottaglie has brought over two Roman pizzaioli to make it with a special blend of Roman wheat, soy, and rice, and baked in a state-of-the-art Italian oven in 90 seconds. (Authentic enough for you?) There’s a namesake Montesacro ($16, stracciatella, kale, peperoncini, garum) and the Pietralata ($19, mozzarella, bottarga, marjoram, extra-virgin olive oil), 10 in all. The stylish enoteca looks like it has been there for years (it was previously a bakery), with a huge vintage oven in the back. There are plenty of salads, house-marinated vegetables, cheeses, salumi, and wines to turn your pinsa break into quite the meal. Open Mon–Sat for lunch and dinner, with happy hour at 4pm. 510 Stevenson St. at 6th St., 415-795-3040.

Fans of Tony Gemignani’s New York–style slices will now find another slice outpost  in SoMa in the former Ironside (and with 49 seats, it’s a lot bigger than the North Beach location). You can also get Sicilian or grandma-style (in a slice or pie), plus there are 13-inch ancient grain pizzas made with Tony’s 00 flour, spelt, semolina, sprouted grain, and whole wheat. If you’re planning to come by during a baseball game, just know the menu will be a bit limited (slices, sandwiches to-go) and will revert back to a full menu after the game (and they’ll stay open late after evening games). 680 2nd St. at Townsend, 415-872-9680.

The next time you’re in the Presidio on a walk or for an afternoon meeting, you’ll want to swing by this casual café and see what Traci Des Jardins is up to, namely Neapolitan-style pizzas made in a wood-burning oven. And the price is right: $11–$13. There are four kinds, from a classic margherita to sausage, mushroom (with Parmesan, pecorino, asiago, mozzarella, arugula), and the Caesar, with pounded anchovy, lemon, garlic oil, and romaine. Perk back up with an espresso by Equator, and you’re good to go. Hours are Mon–Fri 7am–7pm. 215 Lincoln Blvd. at Graham, 415-561-5300.