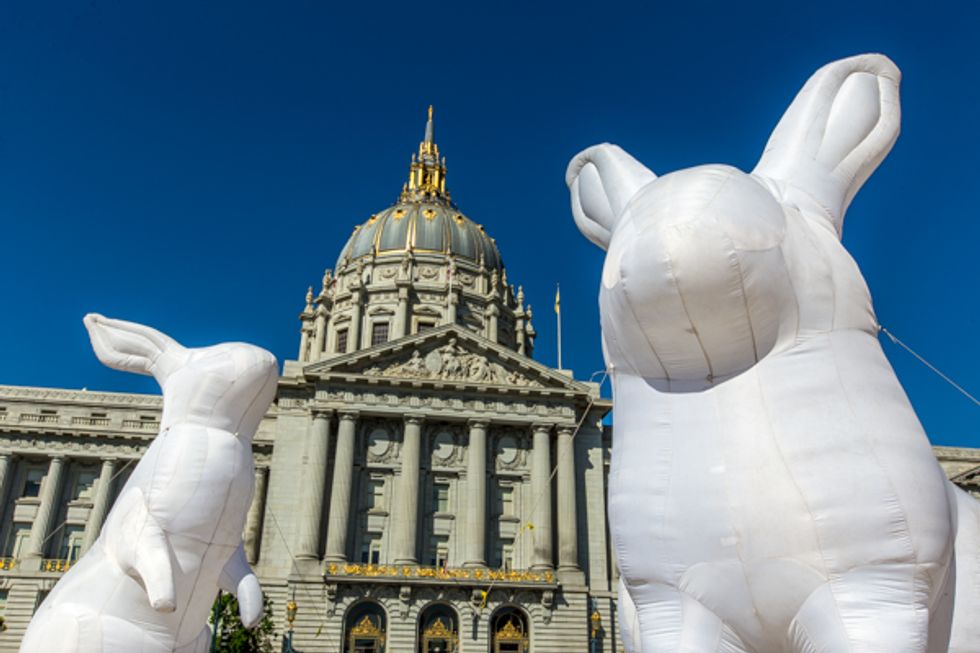 Giant, inflatable bunnies have settled in Civic Center Plaza as part of a playful new art exhibit with a somber message.

Part Beatrix Potter icon and part Pink Floyd concert prop, the floppy-eared nylon sculptures squat, lounge, and stand alert at the foot of City Hall, enlivening the normally humdrum plaza they've made home. Families and tourists strike poses in front of the bulbous monuments and nosh at food trucks assembled by Off the Grid during lunch and dinner hours. At night, the bunnies transform into ghostly forms illuminated from within.

Deceptively cute, the rabbits represent the perils of ecological collapse. In Parer's native Australia, rabbits are an invasive pest originally introduced by settlers that have since wreaked havoc on the continent's indigenous species. Parer intends the symbol and scale of the rabbits to speak to our considerable, yet often glossed over, impact on the environment.

“I expect people will be drawn to the rabbits' playful appearance, and I hope they will also take the time to understand the deeper meaning in the work and discuss how our actions impact the natural world in which we all live," says Parer.

Parer's pieces have exhibited internationally and often speak to our role in a fragile, natural world.

San Francisco is the lastest stop for the bunnies after having toured London, Paris and New York. Locally, Intrude is hosted by Recreation & Parks Department, the Office of Economic & Workforce Development, and the SF Arts Commission which oversees one of the oldest public art programs in the country.

“Great public art transforms the familiar into something magical, and Intrude excels in this regard," said Director of Cultural Affairs Tom DeCaigny.

// Intrude is visible to the public 24 hours, 7 days a week in Civic Center Plaza through April 25th, amandaparer.com.au.