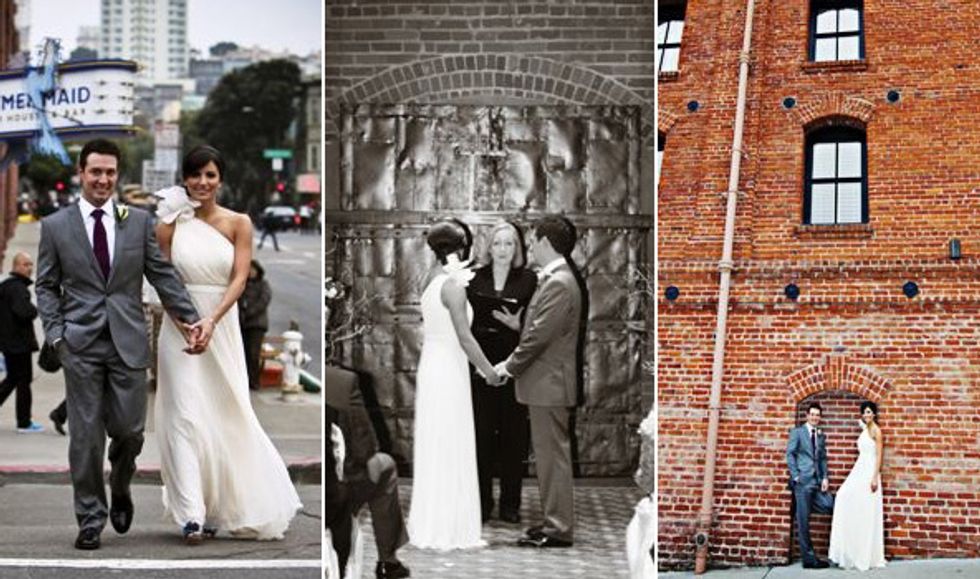 Grade-School Enemies Fall In Love & Marry at The Argonaut Hotel

They met on the playground, reconnected via the Internet and tied the knot at the Argonaut Hotel.

When she was in the third grade, Alyson Yeck of Tracy used to dread walking by the seventh graders before school because Jeff Costa would harass her unmercifully. Finally, after she’d had enough, she told him off to the best of her 9-year-old ability.

Little did she know she’d just sassed her future husband.

Years passed, families moved, and the playground adversaries lost touch. Imagine the now adult Alyson’s surprise when Jeff messaged her via MySpace asking if she remembered him. Her answer: “Of course!”

After months of emails, texts and phone calls the couple had their first date in San Francisco. Alyson, who was living in Arizona at the time, had to drive to California for the evening. “The night was nothing short of entertaining and wonderful,” she says.

Perhaps that’s why they chose to marry in the city after Alyson moved back to Tracy and Jeff proposed by tying a note to their puppy Chuck’s collar. They chose the Argonaut Hotel for the January 8 wedding because, as Alyson says: “We wanted to find a place that was intimate, nostalgic and fun—and dog friendly [Chuck stayed with them at the hotel]. The nautical, antique feeling of The Argonaut melted our hearts and we immediately felt at home.”

The couple took advantage of the hotel’s location by posing at iconic San Francisco landmarks before the ceremony. For the wedding itself, they married in the Maritime Room. “The character of the space suited our needs for an intimate wedding,” says Alyson.

Their officiant read letters the couple had written to each other, the pair was wed and everyone sat down to a feast of featuring seared duck, filet mignon and sea bass.

Afterwards, Alyson changed into a short dress and everyone danced to music ranging from oldies to hip-hop.

“We wanted a wedding that was no fuss in a space where our friends could hang out and not feel like they were at a wedding,” says Alyson. “That’s exactly what we got.”