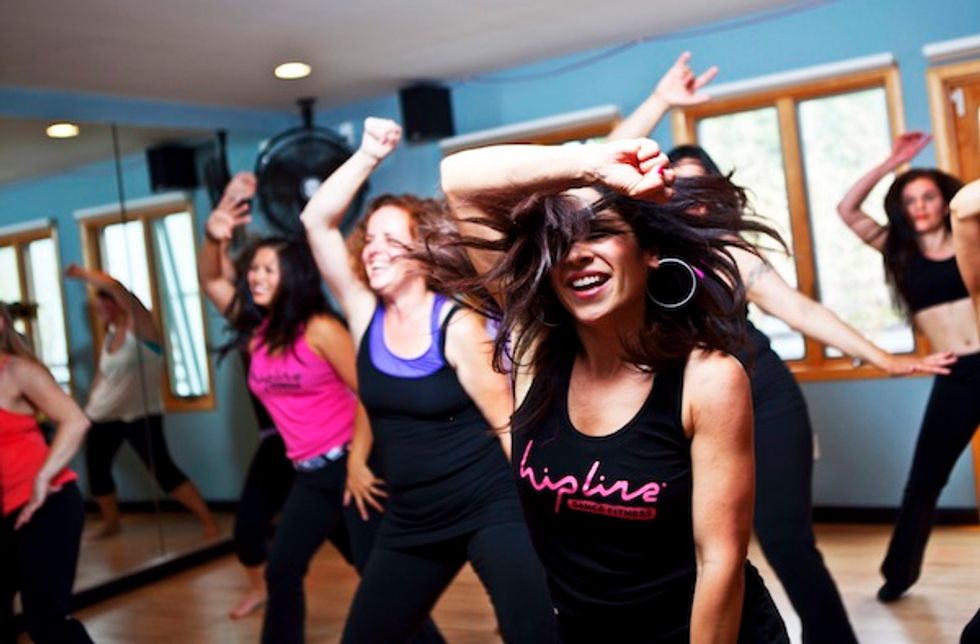 There is a place in Berkeley where women congregate and dance their asses off. What began as a belly dancing studio three years ago, is now a thumping, sweating, smiling mecca for women who want to let loose and get down. Hipline takes the fear out of exercise and puts the fun back in. Weekend classes book a week in advance, evening classes are illuminated by a disco ball and glow jewelry and Shimmy Pop Ninjas teach their hearts out.

Hipline was created by Dublin-born Samar and Gabriela, a sister duo with roots in dancing and personal training. Samar, the Creative Director, is also a painter, and her creativity is evident in the idea of Hipline.

There are three different classes. Shimmy Pop, an addictive hour of dancing with a cardio build up, was named after the belly dancing shimmy of the hips and pop music. Shimmy Pop Toning incorporates resistance training with weights and strengthening exercises to build bone density and muscles to become a stronger dancer. And Shimmy Flow is all-level belly dancing complete with coin skirts and Arabic music.

The instructors, or rather, choreographers are required to have a dancing background. They come from different dancing disciplines and vary in age and ethnic background making for a true mashup. Hipline holds choreographer auditions and have a three-month training program where instructional videos inspire with different routines. Classes and soundtracks are crafted to the choreographer's forte and you're bound to find a favorite whether you prefer hip hop, jazz, world, dub step, belly dancing or all of the above.

A lot of the fun is the music. Choreographers can quickly tell which songs are popular by the heightened energy in the room. Top hits of 2011 were Selena Gomez's “Love You Like a Love Song” for warming up and Britney Spears' “Till The World Ends” for cardio. My personal favorite is shimmying to Rihanna's “You Da One.” It's not all pop music, surprises are thrown in to keep things interesting. In a class led by Ziva, everyone was bouncing around to “Flashdance” in a hilarious frenzy.

Those trying to get a coveted Hipline weekend spot will be excited to know a second studio is slated to open February 1 on Lakeshore in Oakland. It will be double the size of the original Berkeley studio and have brick walls and big windows — very New York dance.

A San Francisco Hipline is a possibility, but it all comes down to finding more Shimmy Pop Ninjas. And so, Hipline is recruiting. If you need to DANCE and want to join a sisterhood of dedicated dancers, get in touch. Until then, the East Bay will be cutting some serious rugs.

Sam Durbin (sami.7x7@gmail.com) is a California lifestyle writer who honed her blogging skills as Editor of FabSugar.com. Sam graduated from The Fashion Institute of Technology, and also writes for 7x7 Magazine and Gilt City.