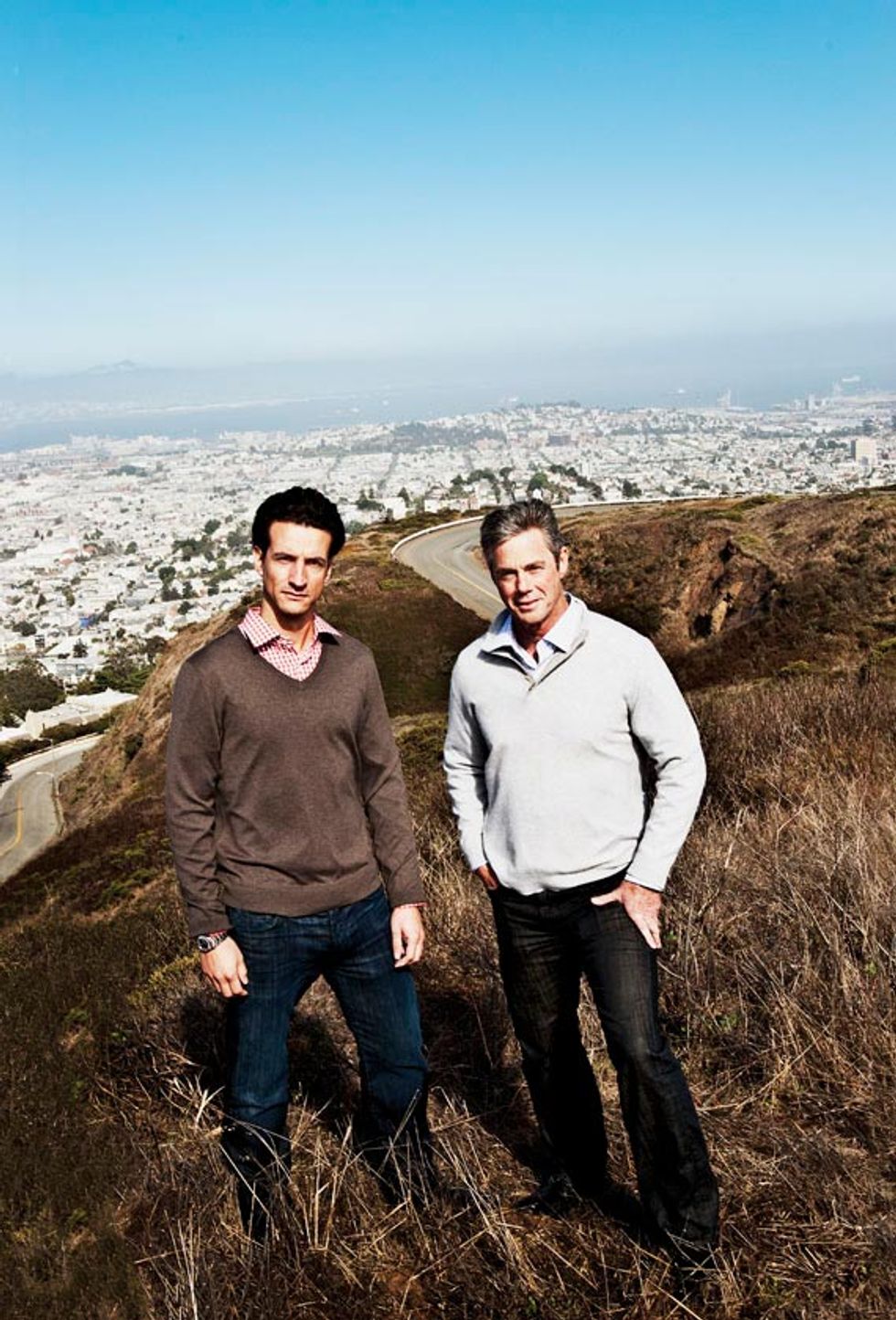 Many a life-changing epiphany have emerged from ashram-filled, curry-laced backpacking trips through India, and the one that formed itself on a beach in Goa for friends Greg Sullivan (above right) and Joseph Diaz is no exception. “We realized that the media wasn’t really talking about meaningful travel,” says Sullivan. “So we decided to do something about it.” From that spark, SF-based AFAR Media was born, debuting an eponymous magazine in 2009. The award-winning coverage is complemented by afar.com’s user-generated travel guide, an experiential travel platform called AFAR Experiences (next stop: Johannesburg), and a nonprofit named Learning AFAR, which hosts disadvantaged high school students on culture-seeking, do-good missions to such far-flung locales as Peru, Costa Rica, and Mexico. “Down the line, I’d love to see an AFAR University,” says Diaz, who regards his eyewitness account of the 2011 Cairo uprising as one of his most exhilarating learning experiences. “After all, travel is the best form of education.”

If the Steller’s sea cow—extinct since the mid-18th century—feeds once again on the kelp forests off the California coast, tip your hat in Stewart Brand’s direction. “Extinction is not necessarily forever,” says Brand from his Sausalito houseboat. The famed ecologist, policy advisor, and cofounder of SF’s Long Now Foundation is attempting to turn back the clock on vanished species with his new Revive & Restore project, which works to ethically reconstitute ancient DNA in the name of “deep ecological enrichment.” Conceivably, refilling gaps in nature would fortify environmental diversity. But before you get carried away with visions of velociraptors darting down Market Street, understand that full revival of any extinct species will take many years and not all species are eligible for a little R&R (the passenger pigeon and Carolina parakeet are two worthy candidates). The still-emerging bioethics of de-extinction will address many questions about selection criteria, one of which may relate to the human role in extinction. “You could say we’re just repairing the damage that we’ve done,” he says.

Having spent her entire career in education—as a teacher, a principal, and later as CEO of Savvy Source, an online educational resource for parents of young children—Noe Valley resident Stacey Boyd bristles at the suggestion of school budget cuts. “Funding is on a precipice,” she says, noting that almost 80 percent of state  legislatures—California’s included—have drastically cut dollars for education.

While old-fashioned PTA bake sales are no match for such a fiscal fiasco, cupcakes can still play a part in saving the art, drama, and music programs that have been chopped in the past four years. Enter Schoola, the national Kickstarter-esque platform Boyd launched this spring. On the site, parents and teachers can activate fundraisers by e-blasting their communities with tempting deals from local businesses, such as bakeries and restaurants.

The fine print? A portion of the proceeds benefits schools on the brink. Earlier this year, Schoola executed successful fundraisers for four local schools, including Harvey Milk Civil Rights Academy and Marin Preparatory School. “Education has always been my passion, but nothing in my career has prepared me more for Schoola than being the mother of two little girls,” says Boyd. “I want them to have the opportunity for a great education.”

Oakland resident Benjamin Grant has devoted the past two years of his career at SPUR to preparing a roadmap for the inevitable: sea-level rise at Ocean Beach, thanks to that leading culprit of environmental havoc, global warming. “Ocean Beach isn’t just a piece of infrastructure that needs to be armored,” says Grant, who holds a master’s degree in city planning from UC Berkeley. “It’s also a national park, a sensitive habitat, and a beloved landscape for the people of San Francisco.” The Ocean Beach Master Plan’s approach sets it apart from other urban-design initiatives with six key moves—from native sand-dune restoration to bicycle and pedestrian upgrades north of Balboa Street—to improve and protect the beach. “When it comes to climate change, we can’t put our heads in the sand,” says Grant, whose recent venture into fatherhood deepens his motives. “We need to get ahead of it to create the best future possible for Ocean Beach.”

DESIGN DIRECTOR OF RETAIL AND HOSPITALITY AT GENSLER, Jeff Henry

In the seventh grade, Jeff Henry’s parents gave him a carte-blanche opportunity to renovate the living room of their Arkansas home. “I proceeded to replace all the beige with turquoise and coral,” says Henry, whose efforts elicited backlash from the neighbors. Undeterred by the inflammatory feedback, Henry would later develop his aesthetic gift into an award-winning career in retail and hospitality design. “I like to create experiences that blur boundaries,” says Henry, who was recently inducted into the Retail Design Institute’s Legion of Honor. To wit, the SoMa resident’s concept for the redesign of San Francisco department store Wilkes Bashford cloaks the retail scene in a townhouse environment appointed with lounges and fireplaces, and his LEED gold-certified design for the new Terminal 2 at San Francisco International Airport feels more like a hip hotel thanks to chic furnishings and world-class art. Next up: Boarding Area E at SFO’s Terminal 3. Delightful “where am I?” moments seem to be Henry’s hallmark, perfected over his 30-year career. “My designs are the ultimate fusion of purpose and desire,” he says.

Ariel Waldman may be a graphic designer by training, but her heart belongs to science. “I encourage people like me, who don’t have a formal science education, to actively contribute to scientific discovery,” says Waldman. Her brainchild, Science Hack Day—a 48-hour event for anyone interested in “collaboration, hacking, and building cool stuff”—is one of her so-called “wacky ideas” that has achieved substantial success. The third-annual exploits will take place Nov. 3–4 at Hot Studio in SoMa and then again in Dublin, Ireland in 2013. Waldman’s other industry feats include creating Spacehack, an online directory of space-exploration opportunities, and authoring Democratizing Science Instrumentation, a book commissioned by the Science and Technology Policy Institute that’s dedicated to people making active contributions to “overlooked, underfunded, or unpopular” areas of science. “My hope is that the science industry will recognize that people with all kinds of skills can influence science in unexpected, yet meaningful, ways,” she says.

Tony Deifell won’t be a consulting psychic anytime soon. “You can’t predict the future,” says the Harvard Business School graduate, who has, oddly enough, made a career doing just that without the benefit of a crystal ball. “But you can think through different possibilities so that when the future finally arrives, you’ve done a dress rehearsal.” The Big Thaw, Deifell’s 2011 e-book and industry guide to surviving the changing face of journalism, offers useful strategies and an optimistic perspective. “Look at the progress of new media as a flood that revitalizes the landscape of journalism,” he says. On the existential front, a question he introduced at Burning Man 2004, “Why do you do what you do?” (WDYDWYD?), has since gained meme status: So far, more than 1.5 million people have pondered the soulful inquest. Deifell’s latest venture, the Muse Factory, applies a similarly meaningful deliberation (What do people want? What do people need?) to the tricky realm of gift-giving, quite possibly putting the kibosh on the regifting movement. “I like making seemingly impossible things happen,” he says.